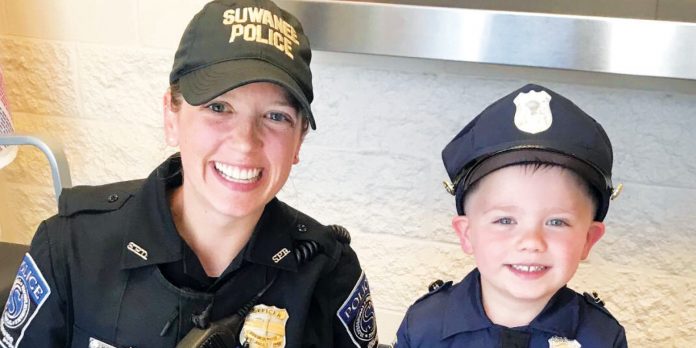 Sam Butera recently moved to Suwanee from Florida just a few months ago in order to be closer to her 3-year-old grandson, James. It was her dream to be able to watch him grow up and be a part of his life. James is a typical boy who loves Spider-Man, firefighters, and is obsessed with police officers! In fact, James says he wants to be a police officer when he grows up. So as any dedicated grandmother would do, Sam reached out to the Suwanee police department to see if she could set up a meeting between James and the local officers.

“From the moment I walked into the Suwanee police station, the warmth from the receptionist and the smile with my request to meet the officers was the best experience any child could be given,” Sam says. “The door opened and two female officers in uniform came out to greet James. After a few moments, two male officers also came out to greet James. I cannot tell you the excitement upon his face as he listened to what they had to say.”

When one of the officers asked James what police officers do, James enthusiastically answered, “You get the bad guys!” The officer told him, “We not only go after the bad guys, but we keep you safe and protect the neighborhood.” Then she taught him the importance of knowing how to dial 911 for help. “The officers in this city of Suwanee are doing a fine job and truly keeping us protected,” Sam says. “But what truly amazes me is their interaction with James and taking time to meet this little boy on his level. He was wide-eyed with sparkles in his eyes as he looked upon the many officers! My heart goes out to all of our police officers here in Suwanee.”

What are you thankful for?