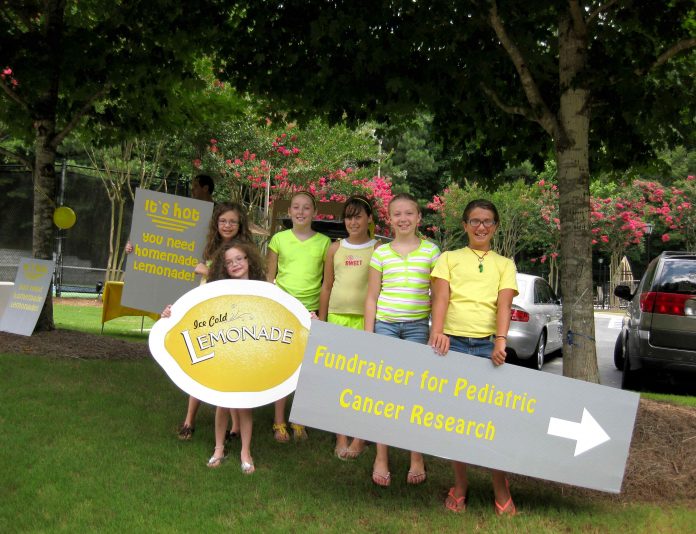 Many of us have childhood memories of gathering our neighborhood friends, mixing up a batch of Country Time Lemonade, grabbing a folding table, making signs with cardboard and markers, and selling a cup of lemonade for a quarter. Our goal was to make enough money to get some treats from the ice- cream truck at the pool or enough to maybe even go to a movie that night (if one of our parents was willing to take us).

Lemonade stands are iconic of summertime youth. Kids have been creating pop-up lemonade stands for decades, all in order to make some quick spending cash for themselves. Sisters, Savannah and Marisa Perry, ages 14 and 12, started doing an annual lemonade stand in their neighborhood four years ago, but with a much different purpose. Each July, Savannah and Marisa, set up their version of “Alex’s Lemonade Stand” at the entrance of their Duluth neighborhood. Alex’s Lemonade Stand Foundation (ALSF) is a 501c3 dedicated to helping cure childhood cancer one cup at a time.

Founder, Alexandra “Alex” Scott was diagnosed with childhood cancer at age 1. At age 4 she told her parents she wanted to set up a lemonade stand to raise money to give to doctors to help them find a cure. With the help of her older brother, Patrick, she raised $2,000 in one day! In 2004, at the age of eight, Alex tragically lost her battle to childhood cancer, but her legacy lives on. Today, ALSF has raised over $120 million for childhood cancer and has funded over 550 research projects at over 100 institutions. The best part about it: anybody can be involved and help keep Alex’s memory and her vision for the organization alive. Kids and businesses all across America are still hosting lemonade stands, but many with a bigger goal in mind: curing childhood cancer. Savannah and Marisa first heard about Alex’s Lemonade four years ago at Rita’s in Suwanee when the Italian Ice shop was donating proceeds from their frozen lemonade to ALSF. “We learned more about the program and knew we wanted to do something to help,” said Savannah.

With the help of their father, Grant Perry, the girls have upped the ante on what a traditional lemonade stand

looks like. They knew if they were going to do this, then they wanted to do it right: they wanted to make the best lemonade possible and raise the most money possible for ALSF. So far, they have exceeded even their own expectations, raising thousands of dollars over the years. The lemonade is “free” for their customers, they only accept donations – “whatever you feel like giving and 100% of the proceeds benefit Alex’s Lemonade,” Marisa explained. The delicious lemonade is entirely homemade and they make special varieties such as sparkling and strawberry. “It takes us about 40 hours of prep time to get ready for our lemonade stand… between making the lemonade, making signs, sending out e-mails to our neighbors, putting up flyers and decorating with streamers and balloons,” said Savannah. Their dad is the master lemonade maker and mixes up 30-40 gallons for the occasion. A couple years ago, the girls added baked goods to the mix and many of their neighbors make treats for them to sell. The other kids in the neighborhood have jumped in to help the cause too. Now there are about 6-7 kids who help run the stand, and Savannah and Marisa are “training” the younger ones to be able to take over one day. In 2012, the girls’ very first customer happened to be a cancer patient who had just finished Chemotherapy treatment for Lymphoma a few months prior. “He wasn’t even a neighbor, he had just been driving through looking for garage sales; and as he pulled away Savannah said, ‘This was meant to be,’” explained Grant. Each year the girls have raised more money than the year before and they are always surprised by the community’s generosity. “The most amazing thing is when a family in an old mini van pulls up and donates $25 or $50 because they know they are lucky to have a van full of healthy children. That means a lot to us!” said Savannah. “The best part about this is the feeling you get knowing you’re helping someone,” added Marisa.

Be sure to stop by Savannah and Marisa’s 5th annual lemonade stand – set to take place on Saturday, July 16th from 11am – 5pm at the entrance to the River Plantation neighborhood (off Peachtree Industrial Blvd. between McGinnis Ferry and Sugarloaf Pkwy.) To learn more about how ALSF or how to be involved, visit alexslemonade.org.

4 Ways to Give Back