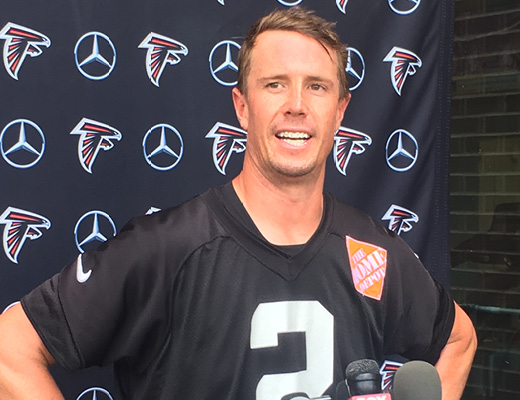 If you’re a die-hard fan of our Atlanta Falcons, you probably had the experience of a lifetime last season. What an incredible time it was to be a part of the “brotherhood.” We can’t think of a better way to start the 2017 season than to get back into the brotherhood with our team and rise up! We had the opportunity to visit with Matt Ryan, Dan Quinn and Dontari Poe at Mini Camp.

The relationship between the City of Atlanta, the surrounding communities and the Falcons was unmatched last season. Our great state rallied around this team and committed to fight the fight with them. We filled the Georgia Dome every home game – we were loud, we traveled to surrounding states to fill opposing stadiums with red and black, we spent weeks trying to convince our coworkers, family and friends that our team was in it to win it. This was our time and with each passing week we saw the team grow and develop. We saw the fight, true grit and heart those men left on the field each and every game. Although we did not have the end result we hoped for, we should all be proud of our Falcons and their accomplishments. We had the opportunity to visit with Matt Ryan, Dan Quinn and Dontari Poe at Mini Camp and they had great things to say about their preparation for the upcoming season.

DAN QUINN
Head Coach
“The nature of our program is competition and we are going to hold true to that.”

On the Rookie Class at Mini Camp:
“I’m encouraged by the kicking team/special teams and pleased with the running game. I love the versatility that we have created with guys in different spots. Our whole goal is to see how far we can take each player.”

On Fans and The Brotherhood:
“A few years ago before my arrival I hoped I’d see that connection between the team and the city. And now, to have a role in that makes you extra proud to be a part of this community. Our players 100% appreciate and feel the support, so for us moving into a new spot, into a new house (Mercedes Benz Stadium), we’re gonna throw some great parties in there and we want it to be as loud as you can possibly imagine and we can’t wait to get started with them again.”

On Matt Ryan As A Leader:
“I don’t think it’s too much of a secret, but he’s a real good guy, great quarterback, great teammate, and a great leader. He does a good job of getting people going.”

On The Leader Of The Defense:
“We all are leaders. There are 11 guys playing at one time – we all have to be that guy to step up and take control when we need to.”

MATT RYAN
2016 NFL MVP Quarterback
“This is what I love to do, it’s the only thing honestly I’ve ever wanted to do and I’m lucky and fortunate to be able to do it. I enjoy every day, 10 years in and it’s still just as exciting to be at Mini Camp – it’s still fun to be out there playing this game.”

“He has put in the work,he’s worked extremely hard,he’s really diligent on making sure he is productive every day and you can see it on the field. He’s playing like a veteran guy now and I think he’s gonna be a big part of our offensive success this year.”

On Roddy White’s Retirement:
“I had 8 years with Rod and really I’ve never had a better teammate. Such a great player, he was a warrior, unbelievable in the locker room, such a good leader by example, brought energy to the facility, to the practice field and to the games every week. No one has meant more to my career than him. It’s always nice to see him get recognized the way he should because he deserves it.”