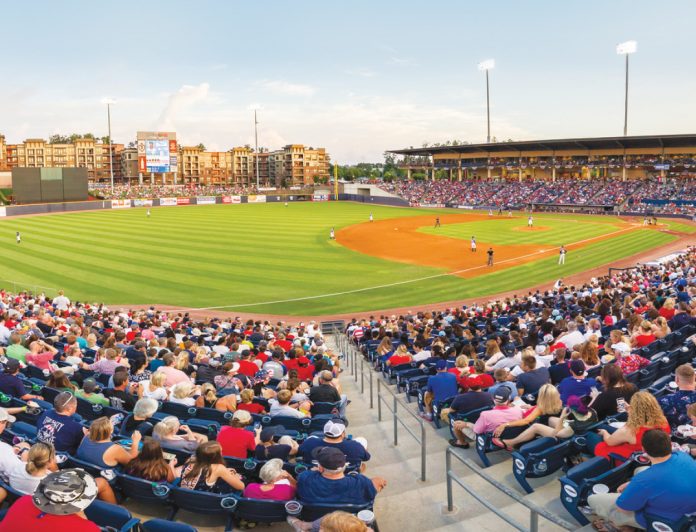 The game of baseball is as iconic to American culture as the tailgating, family & friends-filled, food & drink-fueled days that accompany it.

We are lucky here in Gwinnett. Not only are we in close proximity to our professional team: the Atlanta Braves, but we get to watch the Braves’ rising stars play right here in our own backyard!

The Gwinnett Braves are a Triple-A Minor League Baseball (MiLB) team affiliated with the Atlanta Braves – at any given moment throughout the season, future or current MLB stars decorate their roster. You may recognize a few former Gwinnett Braves names, including Freddie Freeman who won the International League Rookie of the Year while playing for the Gwinnett Braves in 2010, Julio Teherán who was named the International League’s 2011 Most Valuable Pitcher and Rookie of the Year, along with Jason Heyward, Craig Kimbrel, Kris Medlen and Brandon Beachy, to name a few.

It can be really fun to follow a player’s journey as they work their way through the ranks. The Gwinnett
Braves players have put in years and years of extremely hard work and dedication to the sport and are on (hopefully) their “last stop” before the Major Leagues. Fans have a unique chance to make meaningful connections with players, a chance to support them and say, “I knew them back when.” And the energy inside the stadium is contagious.

From the smell of popcorn and peanuts, to the sound of bats cracking, to the ridiculous (yet oh so amusing) promo contests between innings, the Star Spangled Banner, pre and post-game concerts, fireworks displays and the beloved mascot, Chopper, taking photos with kids… there’s just something special about being at a baseball game, and the atmosphere at Coolray Field does not disappoint. Gwinnett Braves games are convenient, affordable, safe and fun. Aside from the obvious entertainment (the game on the field) they have attractions and accommodations suitable for every age group, including inflatables and games in the “kids corner,” delicious concessions, private suites and entertainment rooms, the Home Plate Club with an all-you-can-eat buffet, and more.

“We want you to feel welcome here and know you can come out here and have a good time,” said North Johnson, Gwinnett Braves General Manager. The fan experience at a MiLB game is unlike any other. “At a professional football or basketball game there’s not a lot of conversation and you don’t get up from your seats because the plays are all rushed. Here, it’s a completely different dynamic on the field and in the stadium: you can get up and walk around the concourse or berm, spend time hanging out with friends while still being able to stay tuned into the game,” explained Johnson.

It’s all about the customer experience in the newly renovated craft beer bar: Niekro’s. Named after former MLB Hall of Fame Pitcher and Gwinnett Braves superfan, Phil Niekro (aka Knucksie), the Niekro’s bar and restaurant is located on the main concourse and is home of the famous “Knucksie Sandwich.” Garden and Gun Magazine featured the sandwich as one of South’s best ballpark delicacies and described it as: “an open-faced barbecue sandwich built atop a slice of cornbread. Pulled pork is layered with pickles, coleslaw, and, in a compromise between Georgia’s two competing styles, both mustard-based and sweet red barbecue sauces.”

With delicious food already being a star of the show, Niekro’s now hopes to hold some rank amongst craft beer aficionados in the area. “Our focus is going to be local or regional craft beer – I want there to be beers that people can’t easily get anywhere else,” said Johnson. Their vision for Niekro’s also includes making it a destination on non-game days and a one-of-a-kind spot that people can rent out for private parties.

The 2017 season kicks off on Thursday, April 6th at a home game versus the Durham Bulls with a fireworks show after the game. Season ticket packages are on sale now and pre-sale tickets start on March 11th. Last year the Gwinnett Braves were the International League’s South Division Champions, and with a few returning players on the roster, plus some hyped newbies, we are anxious to see if they can bring home the Championship in 2017, too!

The 2017 season kicks off on Thursday, April 6 with a home game vs. the Durham Bulls!