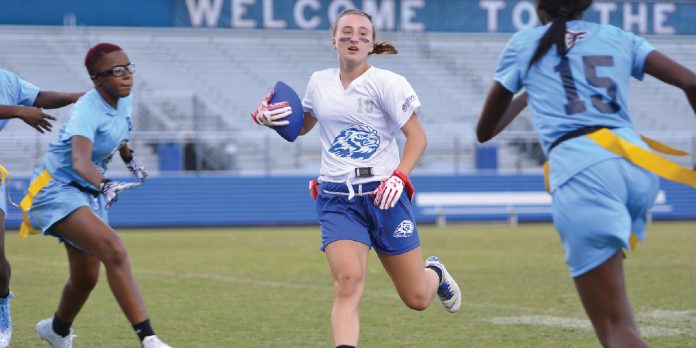 Just ahead of the girls flag football Summit and championship games in December, it was announced that Georgia has become the fourth state to make girls flag football an officially sanctioned high school sport. “The Falcons organization values diversity and inclusion on all levels,” said Morgan Shaw Parker, vice president and chief marketing officer for AMB Sports & Entertainment. “This is just another example of the Falcons’ continued commitment to empower women in sports and provide opportunities for girls to be involved in the game of football both on and off the field.”

With the help of the Arthur M. Blank Family Foundation, the Falcons have funded the sport for more than three years. In 2018, the Falcons partnered with Gwinnett County Schools to pilot the program. Because of the interest shown 2018 for the sport, five additional counties implemented girls high school flag football in their schools in 2019, bringing the total to six total participating counties: Cherokee, Forsyth, Henry, Muscogee, Rockdale and Gwinnett.

“Football teaches teamwork, resiliency and the committed pursuit of shared goals,” said Falcons owner and chairman Arthur Blank. “All of which build character and help shape important life skills for boys and girls.”