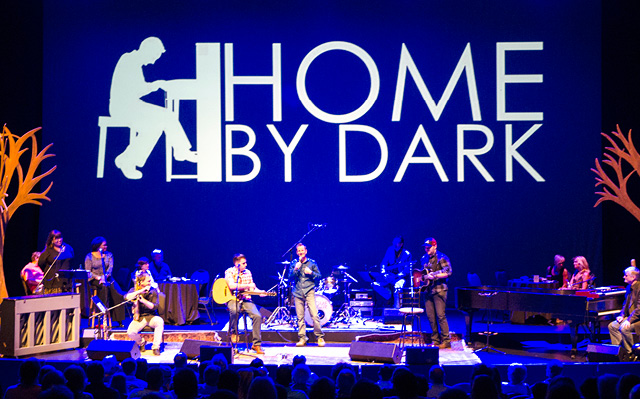 Songwriters in the round concert series debuts 2015 Gwinnett show

Home by Dark kicked off the Gwinnett series on June 13 at Gwinnett Performing Arts Center. The powerful performance touched hearts and captivated the audience, featuring songwriters sharing their own songs, along with where they wrote the song or what motivated them to write it. It was my first Home By Dark show, and I loved every minute of it. You felt like you really got to know the people on the stage, and hearing the stories behind the songs made them even more meaningful. Eight artists shared the stage. Front and center were songwriters James David Carter and JP Williams. Carter is a singer and songwriter from Atlanta who appeared on NBC’s “The Voice” in 2014. With over 43,000 facebook fans, Carter is quickly gaining notoriety as a country singer to look out for! His current album “Songs on the Radio” is available for download on iTunes. Carter’s incredible voice and lyrics drew the audience in as he shared hit songs such as “Georgia Day” and “Sweet Mama”, which he wrote after talking to his mom on the phone and thinking about how much she meant to him. Williams, a staff songwriter with Major Bob Music in Nashville, has known Home By Dark founder James Casto for many years. Casto shared how he and Williams used to drive from Atlanta to Nashville in the hopes of getting to play one song at open mic nights. It was clear that Williams’ incredible voice and powerful songs resonated
with the crowd. He has earned a category win in the International Songwriting Competition, landed a #1 cut on the southern gospel chart and performed as a featured artist at the Kennedy Center in Washington D.C.

James Casto created Home By Dark in 2007. The name comes from fond memories of his childhood, when his mom would always tell him to “be home by dark.” The phrase conjures up memories of playing outside with friends, sharing stories around the dinner table, and the warm welcome his mom always extended to others.

Casto grew up in Roswell, and started playing piano and writing songs in high school. After college, he struggled to find work as a musician, eventually deciding to pursue a career in the business world. He earned his MBA in 1996 and spent several years in the business world, building a highly-successful company with three colleagues. On the morning of September 11, 2001, as it did for many Americans, his outlook changed. While watching the unforgettable scenes in New York City on television, James realized he needed to take a leap of faith to pursue his passion. He decided to leave his lucrative corporate job to pursue music full-time in January 2002. The decision changed his life forever.

James restarted his music career and quickly became a mainstay on the Nashville music scene. A true believer in the power of music, James says he is grateful that his life has been deeply altered by music, by songs. “A song can make you laugh when you are in desperate need of a smile; make you cry when your heart has felt like stone for years; and, maybe most importantly, make you feel like you’re not alone.”

In 2007, James began to spread this message by inviting his songwriting friends to share the stage for in-the-round songwriting shows. Thus was the birth of HOME BY DARK. Casto notes, “Our goal each night at HOME BY DARK is to reach your heart, make you feel something, and prove that a song can change your life.”

The show has steadily grown into a sold-out series at Chukkar Farm in Alpharetta. Some of the past guest performers have written songs for Garth Brooks, Chicago, Blake Shelton, Kelly Clarkson, Sara Evans, Stevie Nicks, Kenny Chesney, Sister Hazel, Miranda Lambert, Trisha Yearwood, and more. Their guest instrumentalists have performed on the David Lettermen Show, at Carnegie Hall, Lincoln Center, Disney, and around the world.

Home By Dark supports a different nonprofit partner at each performance. The June 13 show benefited 9th grader Remington Youngblood’s Change 4 Georgia, a local organization who’s mission is to “serve those who are serving us”, by providing students with opportunities to thank soldiers and veterans for their service, dedication and sacrifice in keeping the country safe. They work with Home by Dark and The Fresh Market Suwane for their initiative “Applauding Heroes,” which gives a special date night to military couples. The Fresh Market provides a picnic dinner which Change 4 Georgis delivers, and then attends a Home by Dark concert. Remington shared, “they deserve our thoughts, prayers and support and we are here to give them all three.” Change4Georgia has raised over $1 million to date. For more information, visit change4georgia.org. The Suwanee Fresh Market supports both Home By Dark and Change 4 Georgia in multiple ways, including providing food for the artists before the performances. General Manager Jim Healy shared that he and his wife Linda have attended every Home By Dark concert since they found out about it. “Each one is different, bringing different artists to the stage. We love it,” shared Linda.

“Creating authentic musical experiences that leave audiences with something meaningful is what Home By Dark is really all about,” said Founder James Casto. “As songwriters, our hope is that people truly connect with the lyrics, and these concerts give audiences a firsthand look at the stories behind some of their favorite songs.”

Visit Home By Dark’s website for more information or to purchase tickets: homebydark.com.