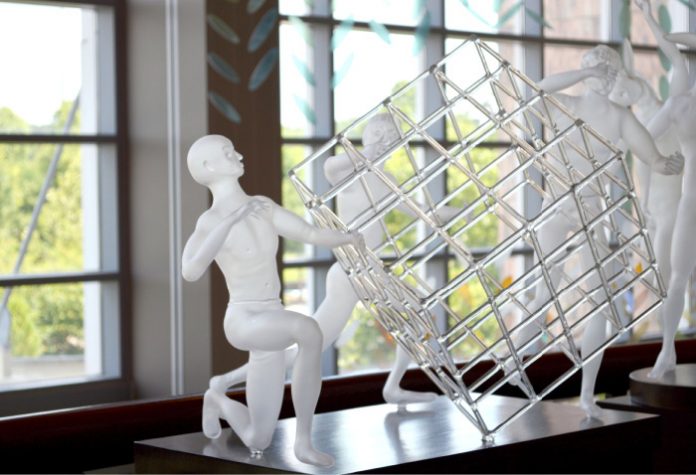 The North Gwinnett Arts Association and Hans Fräbel will be exhibiting some of Fräbel’s handblown glass creations at Suwanee City Hall from June 19-Sept. 1. Fräbel’s Seven Sins and Virtues creations will be displayed upstairs and some of his other works will be displayed downstairs. The NGAA hosted an open reception and invited the public to hear Fräbel speak at their June 25th meeting.

The exhibit consists of 14 sculptures depicting the Sins and Virtues. There are also various smaller sculptures from the Fräbel Studio collection, as well as one floral botanical from one of the three Botanical Garden series of sculptures. The Sins and Virtues series was created in response to the annual challenge of what Frabel will do next. He is a ‘founding father’ of the modern flameworker art glass industry, his specialty or niche being the hollow figurative form, creating hollow forms without the use of a cast or mold. The idea of the Sins and Virtues sculptures came from the Frabel Studio artistic director, who pitched the idea to Frabel who agreed
to take the challenge. Hans Godo Fräbel was born in 1941 in Jena, Germany.

Events in the tumultuous post WWII years in Europe resulted in the exodus of Fräbel’s family to Wertheim City in West Germany. There, Fräbel’s father and a colleague founded a scientific glass factory. Subsequently, Fräbel’s father became the controller at the well-known Jena Glaswerke in Mainz West Germany and there he encouraged Fräbel to begin
a Lehransbildung Program as a scientific glassblower. Within three years, at the age of 18, young Hans received his Gzhilfenbrief, a rigorous apprenticeship diploma awarded for mastery in the trade of scientific glass blowing. Among his professors and peers at Jena Glaswerke, he was called ‘Mr. Fast Hands’ for his extraordinary command of technique and artistry with flame and glass.

In 1965, Fräbel traveled to Atlanta, where he took a position in the scientific glass blowing laboratory at the Georgia Institute of Technology. There, he began to further expand his creative education and to fulfill his own artistic expression. He studied art at both Emory University and Georgia State University. His creative glass gained a following among professors, colleagues and friends. Thus an expanding circle of recognition began for Fräbel Glass Art.

Encouraged and affirmed by positive responses and economic success, Fräbel established the Fräbel Glass Art Studio in 1968. At this time, torch glass was disdained as a valid or ‘serious’ medium for creative or Fine Art. Fräbel’s persistent endeavors and successful experimentation helped to change this narrow bias.

In 1979, Fräbel’s ‘Pop Art’ sculpture “Hammer and Nails” was exhibited as the feature work in the internationally acclaimed New Glass Art Exhibition, which then traveled to major museums throughout the world.