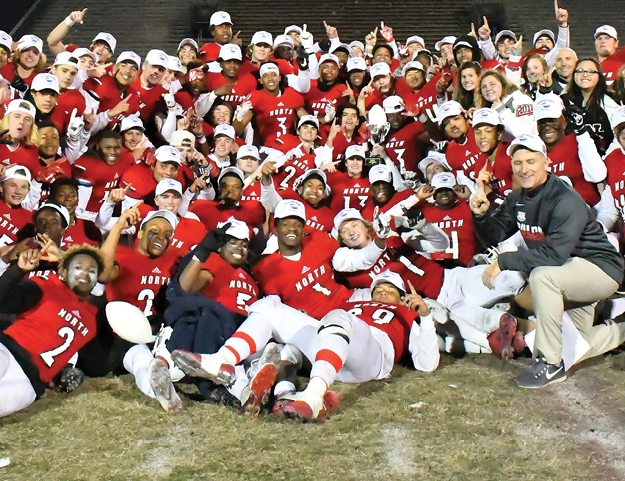 On Friday, December 15th, the North Gwinnett Bulldogs defeated the Colquitt County Packers in the Class AAAAAAA championship football game at North’s Tom Robinson Stadium in Suwanee. With 5:50 left in the game, North took the lead with a touchdown, but kicker Cameron Clark missed the extra point. The Packers wasted no time driving down field for a touchdown and taking the lead, making it a 17-16 game and setting them up to win their third potential state championship in four years.

With only 0:49 seconds left to play and three timeouts, North quickly marched down the field into Packer’s territory. The Bulldogs got some help when a defensive holding call, two illegal substitution penalties and a pass interference call against Colquitt County kept them in the game as time was expiring. This gave North the opportunity to kick a field goal with no time left on the clock. After missing a previous extra point, Clark was given the chance to redeem himself and did. He made a 38-yard field goal for the win, setting off a huge on-field celebration. “There wasn’t much going through my mind,” Clark said. “I was just trying to focus as much as I could. My kicking coach, he tells me every day that it might come down to a game-winning kick and he puts me in those scenarios, so he was a big part of it.” This is the first state championship won in North Gwinnett’s history. The team finished the season (14-1), while Colquitt County finished (11-4).