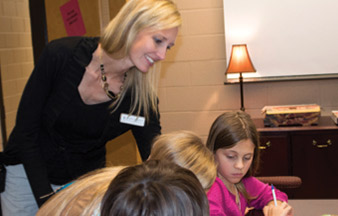 Wednesday, November 17, I was fortunate to be able to experience a very important role, in an environment that is quite different than what I am used to. Walking into Roberts Elementary School in Suwanee, I was greeted with a warm welcome from the office staff, and Dr. Dion Jones, Principal of the school, handed me an official name badge reading “Angela Veugeler, Principal for the day” with the official Gwinnett County Schools logo. The Gwinnett Chamber of Commerce has partnered with the school system for the last twelve years to offer this program, giving nearly 130 business leaders an opportunity to experience a real “day in the life” of a Gwinnett County School principal. This year’s program was presented by Children’s Healthcare of Atlanta. I had heard it was a great program, and being a mom with children in the school system made me even more interested in participating.

Dr. Taffeta Connery, Assistant Principal at Corley Elementary in Lawrenceville, is working with Dr. Jones to complete her residency in the GCPS aspiring principal program, and the three of us hit the ground running, greeting the boys and girls as they got off the bus. We then headed to the media center for the morning announcements, where I was thoroughly impressed by the fifth grade newscasters. Dr. Jones introduced me to the students, and I experienced a minute of fame on camera. We then proceeded to the office, for a check-in with staff and a building level meeting.

We visited several classrooms throughout the day. When we stopped by the music class, the students were just finishing up. Dr. Jones introduced me to the music teacher as “the new principal.” I thought she was going to faint. She had not seen the announcements or read my name tag closely, and thought Dr. Jones was leaving the school. When we filled her in that it was just for the day, she was extremely relieved. The smiles and high fives in the hallway made it very apparent that not only does Dr. Jones have an excellent relationship with the staff, but also with the students.

The theme Dr. Jones has carried throughout the school is “preparing for college.” There are SEC college logos in several places around the school, there is information about different colleges in the media center, they spotlight a different college each week on the announcements, and each year the fifth graders go on a field trip to visit a college.

The most rewarding part of the day (in my opinion) was the peer leader lunch. A group of fifth graders that had been chosen as peer leaders, got to meet during lunch, and work in teams to give feedback on the school. They were asked to share:

-what was working at Roberts?

-what was not working at Roberts?

-how they could improve?

-what they would like to leave as their legacy?

It was very neat to see them work together and think about these questions. Dr. Jones led the group discussion, reviewing and responding to all of the suggestions and feedback. What seemed to be unanimously working was technology, there were a few things “not working” such as the cafeteria food, and there were several suggestions for what they wanted to leave as their legacy, including an electronic sign and a larger outdoor classroom. This was the charter class, they were in Kindergarten when the school opened, and they also suggested leaving their handprints somewhere; maybe on the side of the building.

The afternoon finished with a development meeting with Dr. Washington Brass, Director of Leadership Development at GCPS.

Dr. Connery filled me in that Dr. Jones had been named Administrator of the year in the state of Georgia, and as the day passed I certainly saw how he had earned that title. It was an exciting, enlightening day, and I am glad to have had the opportunity to be “Principal for a day” at Roberts Elementary. Thank you Gwinnett Chamber, GCPS, Dr. Jones and the entire staff and students at Roberts!