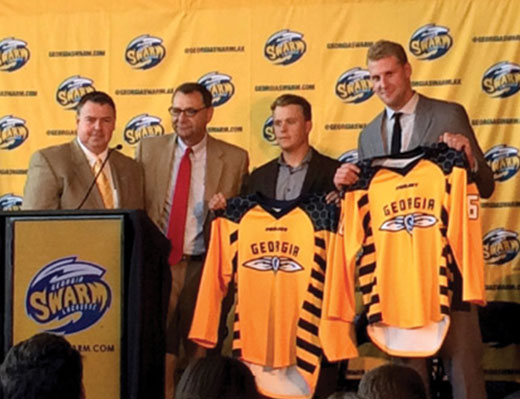 The first National Lacrosse League (NLL) team in the Southeast US, the Georgia Swarm, made Gwinnett their home earlier this year, and were officially welcomed to the community at a press conference on July 16, 2015 at Gwinnett Center.

Surrounded by a large turnout of community members, media, citizens and young athletes proudly carrying their lacrosse sticks – the Georgia Swarm expressed great excitement about their move. “This is a community we’re going to play our hearts out for,” said Co-Owner & President, Andy Arlotta. Previously known as Minnesota Swarm, the strategic move to the Southeast was a first for the league’s 30-year history. “On behalf of the NLL I would like to formally welcome Georgia into the National Lacrosse League,” announced George Daniel, Commissioner of the NLL, amidst a roar of cheers and applause. “Lacrosse is the fastest growing sport in the country. It’s high-energy, fast-paced, high-scoring and hard-hitting action and you’re not going to find any other sport like it.” he continued.

The Georgia Swarm are eager to introduce the sport to new fans in metro Atlanta’s rapidly-growing lacrosse community. “The primary reason we wanted to relocate was to find a partnership with a community like this and we’re really happy we found that here in Gwinnett County,” said John Arlotta, Andy’s father and Co-Owner/General Manager of The Georgia Swarm. “Raise your sticks!” he said to the audience. Excitement and energy surged the crowd, as young, local athletes raised their lacrosse sticks in the air. “You can tell from the kids in the audience here that the lacrosse community is growing and we have an opportunity to give something back to them. With our team, our coaches and players, we can accelerate that growth,” he continued. The team is confident that once people come experience a live game, they will be hooked. With team mascot Stinger leading the pack, they even prepared the crowd for game day by teaching the team’s signature goal dance.