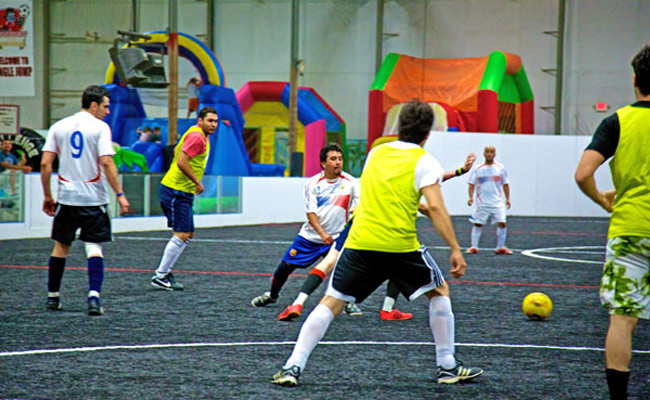 While parents may tell their children not to play ball in the house that is certainly not the case at the Silverbacks Suwanee Indoor facility located on Brogdon Exchange in Suwanee. In fact, at the facility that boasts two side by side indoor soccer fields and the only black field in America, the rule is just the opposite offering soccer, flag football for youth and adults and even providing facilities for Lacrosse.

In Suwanee since 2002, the Silverbacks became a partner of the facility in 2005 and took over the facility about three years ago.

In addition to the sports leagues, an after school program was started in January 2012 where students are picked up, receive homework help, a snack and have two and a half to three hours of physical activity, such as soccer, flag football, kick ball and dodge ball.

“If you’re not associated with an organized club or league, kids don’t get enough exercise,” John Drummond, director of after school programming, said. He added that what they offer at the Suwanee Indoor facility is not just one sport specific, but multi-sport where the children can work on different skill sets.

Drummond, who is from Scotland, said he grew up playing all different sports. “For me, learning all the sports helped me with the one sport I love to play, which is soccer,” he said. “And typically the well-rounded athletes excel at more than one sport.” Drummond, who is a Suwanee resident, said the thing about the program is it’s recreational. And the emphasis is all about the fun. “We teach fundamentals with ‘fun’ being the appropriate thing,” he said.

And what Drummond said he finds most rewarding about the program is when a child learns how to play soccer or how to throw a football. “We’re not here to make olympic

superstars,” he said. “We’re here for the kids to have a great time. And we make it affordable as well.” Drummond has a passion for coaching with about 12 years at the Norcross Soccer Association leading a variety of age groups from under 10 through college, and he said it’s the small things like seeing a kid smile and saying ‘thank you coach’ that makes everything worthwhile and is why he loves his job.

Summer camps are being held at the Suwanee Indoor facility that also provide multi-sport focus to get kids off the couch and up and moving. Camps also include one field trip per week.

The Silverbacks remain community focused through events and being involved with the North Gwinnett school clusters. Awareness of the Suwanee Indoor facility, home to a

number of youth and adult leagues from competitive to super-competitive, is beginning to grow.