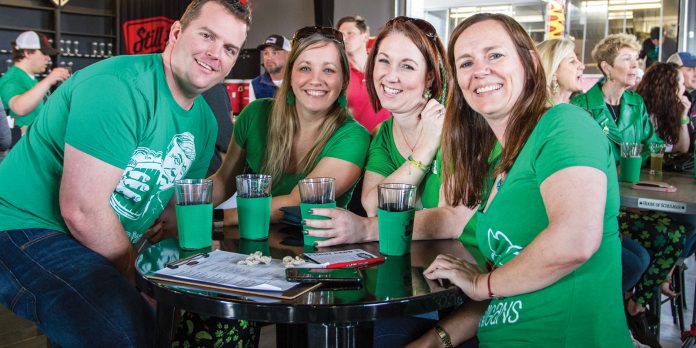 Spring is the perfect time to find your fire at StillFire Brewing.

Nothing beats a cold beer on a warm spring day, and our friends at StillFire Brewing are brewing up plenty of opportunities for you to celebrate the end of winter. From live music and events, to exciting new releases and the return of some of your locally brewed favorites, we’ve highlighted everything you need to know about StillFire’s Spring Lineup.

March 13: StillFire St. Patrick’s Day Party
Come celebrate the luck of the Irish – StillFire style. On Saturday, March 13th, the brewery will feature live music from 3-10:30pm and delicious food options from Daddy O’Brien’s Irish Pub from 12-9pm and The Grubbin’ Out food truck onsite from 3-10pm. Plus, stock up on St. Patrick’s Day swag available for purchase and get festive with pints of green beer! Looking to celebrate at home? Swing by and grab a crowler of their O’Farrell’s Irish Red! This easy- drinking, light caramel malt clocks in at 5.6% ABV and is sure to put you in the Irish spirit.

March 20: Beer Chaser 5K After Party
StillFire Brewing will be waiting at the finish line of the inaugural Suwanee Beer Fest Beer Chaser 5k with 16 oz. beers for the race finishers. Along with their beer, runners will also receive a ticket for an exclusive Beer Chaser/StillFire Brewing branded pint glass that can be picked up across the street at the brewery. Once there, keep the party going with live music and delicious food at the official after party! To sign up for the Beer Chaser 5K visit suwaneebeerfest.com/beer-chaser-5k.

March 22: Station Park Opens
The City of Suwanee has been busy the past few months – they had a colorful new mural painted on the courthouse wall on the beer garden side of the brewery, and have also been upgrading Station Park on the patio side of StillFire. The park is set to open on March 22nd and features an astro-turf cornhole area, string lights, and plenty of room to spread out. Plus, the playground area has been given a facelift with new paint, mulch, and new benches for parents to sit and watch their kids while enjoying a beer from the brewery.

March 27: Dueling Pianos/Double Fightin’ 12 IPA Release
Make it a parents night out with the Andrews Brothers Dueling Pianos on March 27th! The all- request-sing-along music and comedy show (definitely not for kids) kicks off at 8pm. Outdoor tables are first come first serve, and social distancing will be encouraged at all times. There will be a $10 cover in the brew garden for those wanting to watch the show starting at 6pm! PLUS – StillFire Brewing is once again honoring the former fire-fighting tenants of their building by releasing a limited taproom-only Double Fightin’ 13 Imperial Red IPA. Like the original, the brewers made 13 additions of centennial hops (including a double dry hopping) for this special imperial red IPA. Available for a limited time and only at the taproom, patrons can reserve 4-packs in advance at stillfire.oznr.com.

Happy Feat Charity Beer Run
The Happy Feat organization will be hosting a “Happy Hour” Beer Run and 5K on April 17th. After the race, head over to StillFire for the official after party with live music and delicious food trucks! Make sure to order the “Happy Feat” beer – $1 of every draft will go to benefit Happy Feat. To sign up for the 5K visit happyfeat.org.

Hopnoxious Release Party
One of StillFire Brewing’s most popular beers ever is FINALLY making its return to the taproom and in cans on April 24th. Hopnoxious Double IPA is bursting with insane amounts of grapefruit, orange, and apricot flavors with a rich lingering pine bitterness that had patrons screaming for more when it was first released last April. Surprisingly balanced and smooth, the delicious drinkability of this beer belies its massive 10.24% ABV punch. If you are a hop-head, this is a beer you simply cannot miss! Come try it for yourself at the release party featuring live music, food trucks and more!

Guide to Suwanee Fest 2018: A Celebration of Community