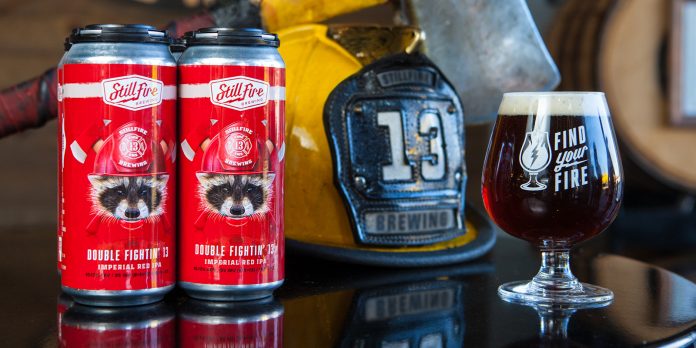 StillFire Brewing‘s passion for brewing is reflected in the quality of beers the Georgia brewery has consistently produced since opening their doors in a renovated fire station in 2019. In their first year of operation, the brewery earned seven national and regional awards, including a bronze medal in the beer world’s most prestigious competition, the Great American Beer Festival for their popular Blood Orange Wheat beer, Orange Diva. Orange Diva was also voted “Best Beer in Georgia” at this year’s Suwanee Beer Fest. The brewery can now add SEVEN more medals to their growing list of accomplishments thanks to their impressive showing at the 2021 Can Can Awards.

The Can Can Awards is the premier beer competition focused solely on canned craft beers. The competition promotes the benefits of canned beer and attempts to disrupt the beverage industry by elevating the conversation to speed up the adoption of canned craft beer. It is the organizers’ sincere hope that a can-only competition can change the perception that some beer styles are “not good for cans.” Judging was held in Atlanta in July by Beer Judge Certification Program and Cicerone-certified judges and industry professionals. gold, silver, and bronze medals are awarded to the three beers that best represent each individual category of beers.

Over 750 submissions from around the world were entered in this year’s competition. StillFire Brewing’s popular Double Fightin’ 13 Double Red IPA came out on top with a gold medal in the Red IPA category. The beer was special as it was brewed as a tribute to the firefighters who once resided in the building that is now StillFire Brewing. In addition, the brewery also received three silver medals for their Dark Moo’d Imperial Stout, O’Farrell’s Irish Red Ale (named after brew master Phil Farrell), and Hugh Hefnerweisen Weissbier. To round out the awards the brewery also received three bronze medals for their Belgian Golden Strong Ale, Suwanee Devil, Old Chief Inspector English Barleywine and HopNoxious Double IPA.

“Bringing home not one, but SEVEN medals at this year’s Can Can Awards is a huge recognition,” says StillFire Brewing brew master Phil Farrell. “Our brewing team is excited to keep producing innovative, award-winning craft beers that we can offer to the Suwanee community and beyond. Winning a silver medal for a beer named in my honor is just the icing on the cake!”

StillFire Brewing is located in the heart of downtown Suwanee, Georgia. To learn more about the brewery and their award-winning beers visit stillfirebrewing.com.