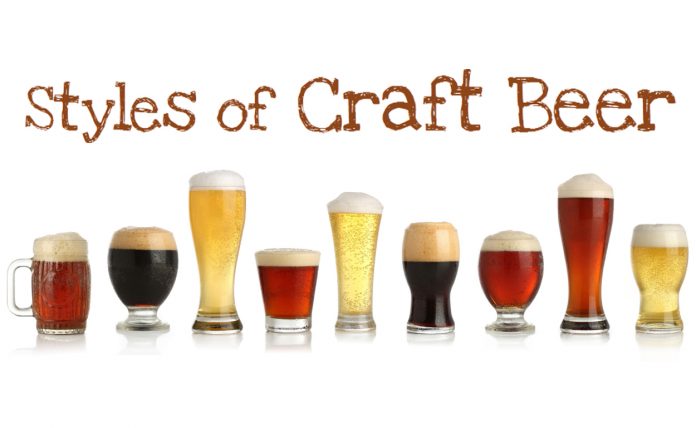 Welcome Back! Last issue we briefly discussed the history of American Craft Beer. This issue we will be diving deeper into the many styles the world of craft beer has to offer. I have narrowed our discussion down to the most popular brews and will provide you
with a good base of what each one will taste like as well as some possible food pairings!

To begin we must understand the basic difference between Ale and Lager. Ales are brewed using yeast that is known as “top fermenting” which means that as the yeast is working it rises to the surface of the fermenting tank. Ale yeast ferments best at warmer temperatures, from room temperature up to around 75 degrees. As Ale yeast ferments it produces chemicals called esters that will affect the flavor of the final product. Lagers are brewed with yeast that likes to work at the bottom of the fermenting tank which gives them the label “bottom fermenting.” Unlike Ale yeast, Lager yeast does not add much flavor to the beer and because the yeast does stay at the bottom it can often be reused. This yeast ferments at much colder temperatures, between 46 and 59 degrees, and originates from European countries like Germany. In fact, the term Lager comes from the German word “lagern” which means, “to store.” As the meaning of the word suggests, the “lagering” process takes much longer to complete when compared to Ales.

We will start with the various styles of Ales:

Pale Ale: Traditional British pale ales tend to have an understated and very drinkable quality, bringing malty characteristics with a touch of floral hops to give great balance. Bitters and ESBs (Extra Special Bitters) are included in the category of traditional British style pale ales. Because they tend to fall on the malty side, these beers pair well with a wide range of foods from stews and braised meats to spicier cuisine from India and Asia. American Pale Ales typically shy away from the heavier malt flavor and are bolder with a more hop forward taste. The use of hops gives American Pale Ales earthy, sometimes citrusy, and spicy notes. These Pale Ales pair well with

simpler dishes
such as grilled meats and vegetables.

India Pale Ale: In the 1700s British soldiers and citizens living in India under colonial rule were at a loss for good beer from back home. Malty Ales would spoil on the journey from Britain to India and because of that, hops, a natural preservative, were added in generous amounts to the beer heading to India. Over time the bittering qualities of hops became highly desired. Today, IPAs are one of the most popular styles of beer in the market. They come in many different variations but are always noted for their firm bitterness and floral aroma. The brews are a little difficult to pair with food because of the heavy bitter aspects. They do go well with salty and fried food because the crispness and palate cleansing qualities derived from the hops will cut through the lingering salty and fatty flavors. Hops tend to amplify spiciness so be careful with this beer when eating something with some heat!

Brown Ale: Brown ales have been around for a very long time, which means there is a huge range of flavors within this style of beer. Typically you can expect a malt-centered flavor with varying notes that include toffee, caramel, biscuits, and coffee. Hops are usually present in this style but in most cases are an afterthought when you are drinking this brew. Brown ales are great for pairing with food because their flavors are typically well balanced and are my “go to” when doing so. Again, as with the malty British style Pale Ales, these beers pair well with a wide range of foods, especially meat.

Porters: Porters should be very dark, almost opaque, but when a Porter is held up to the light you should be able to see through it. This beer should have a decently mild flavor with notes of roasted grain, chocolate, toffee, and coffee. It feels thin and is very smooth for a dark beer. The next time you have a steak and are looking for a beer, reach for a Porter! The
chocolate and coffee notes that come with most Porters pair well with desserts such as Pecan Pie and Ice cream!

Stout: Much like a porter, stouts should be a bit grainy and carry similar flavors of roasted malt, chocolate, licorice, molasses, coffee, with little to no hop profile. As with most styles, stouts have many variations and range from very sweet chocolate dessert stouts, to bitter and bold Imperial stouts. As compared to porters, the Alcohol By Volume (ABV) is much higher. Depending on the sweetness of the beer, Stouts can be paired with anything from a chocolaty dessert

to oysters! Again, as with the darker beers, red meats tend to pair very well with this beer. If you are looking for something different to try, make an adult float by putting some vanilla bean ice cream in a chocolate stout!

Wheat Beer: These beers can be considered some of the oldest styles of beers in existence! Traditional Bavarian Wheat beers are cloudy which is caused by the suspended yeast and wheat proteins. These beers carry notes of banana and clove with an almost unnoticeable hop flavor. Belgian style Wheat beers bring notes of orange peel and coriander and are often enjoyed with a slice of orange. A perfect pairing for these beers would be a citrusy shrimp or grilled fish salad! When pairing with these beers keep in mind that they have a light, delicate flavor and should be enjoyed with a food of a similar profile!

Pilsner: This is by far the most popular style of beer across the world comprising nearly half of the market. The flavor of this beer is simple; it has some light grain notes as well as some bittering hops to bring balance. Crisp and clean flavor characteristics make this beer wildly popular. Because of the mild characteristics of pilsners, a lighter meat such as chicken or fish pairs quite well with this brew. Fried fish tends to be perfect with a pilsner. Next time you have fish and chips… make sure a pilsner is in your hand to wash it down!

Bock: Bocks are a particularly old style of beer and have a few sub-styles. Dunkel Bock is the bock that most closely adheres to the traditional definition of the beer. This lager is rich, smooth, and malty with noticeable hop bitterness. The depth of the malt flavor is without a doubt the most dominant attribute. A Doppelbock, or Double Bock is just that. More malt, depth, sweetness, and as a result, this brew is higher in alcohol. Maibocks and Helles bocks are paler in color and on the lighter side. These lagers are typically enjoyed in the spring and have much more of a hop characteristic to accompany the breadiness that comes with the style. These beers have a ton of flavor and with that in mind you will need to pair with a food that also has a lot of flavor. Stay away from delicate foods such as chicken or fish and instead head for something like heavily seasoned grilled pork or even some roasted or grilled game.

We were only able to touch on the surface of each of these beers. Please keep in mind that craft brewers love to add their own touch even when brewing the most traditional beers. This is part of the reason craft beer is great! To better understand the flavors behind the different styles, you will have to go out and try them for yourself! Who knows, you may just find your new favorite beer!

BY: Curtis Stockwell
of The Beer Growler