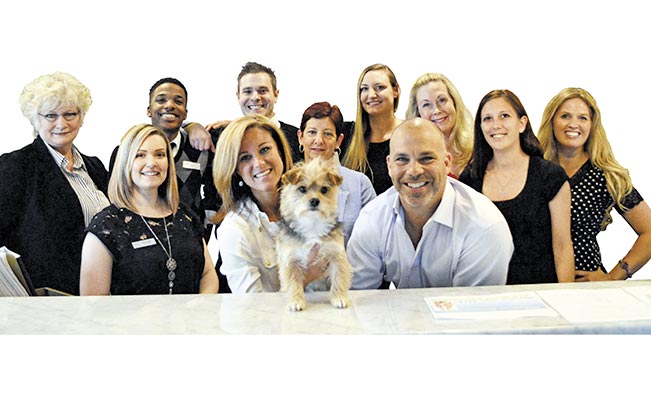 Healing Local Families One Spine at a Time
BY: Rachel Fasig

Sugar Hill Spine & Wellness is owned and operated by game-changing chiropractors, Dr. Joseph Clarino and Dr. Debra Cirone. This husband and wife duo is quickly earning the reputation as a power couple in the chiropractic world – as they move their practice beyond traditional chiropractic care to a complete medical and holistic approach.

“Few chiropractors get into the true cellular processes like we do,” Clarino explained. At Sugar Hill Spine & Wellness, they assess and analyze their patients as a whole: physically, emotionally, and chemically. Their promise, as stated on their website, is “To honor each patient as a unique individual: acting as an instrument of healing, rather than simply treating their symptoms or ailments.” But since the practice’s official opening in 1999, the focus has shifted a bit. It wasn’t until a life-changing diagnosis that they understood the importance of holistic healthcare.

“Two and a half years ago, I had a serious autoimmune disease called Hashimoto’s – where the body’s immune system attacks the thyroid gland. My immune system was crashing…I was extremely fatigued and experiencing stomach cramps,” Clarino explained. Scared for his health, he went to get an MRI and meet with a doctor who discovered that he had parasites in his body, his adrenals were bottomed out, he had an enlarged thyroid, low testosterone levels and was gluten intolerant. “When I left that appointment and saw those results, I realized that I couldn’t take care of people the way I was,” Clarino said. Despite consistently working out and eating what most of the world would consider as healthy (and what he considered healthy at the time), Clarino’s health was suffering. And if it were not for a complete and holistic medical diagnosis, he would not have known to change his lifestyle and eating habits.

Clarino and Cirone decided, from that point forward, that they would invest in state-of-the-art lab equipment and offer complete medical screenings on top of traditional chiropractic care. They are passionate about educating and empowering individuals to live a healthy lifestyle. “The education component is so important – it’s the essence of what we do here,” Cirone said. They frequently hold seminars and classes in their office that are open to the public and discuss a variety of topics, ranging from: organic eating on a budget to autoimmune disorders. They also offer free quarterly “Mom’s Morning Out” events where they provide childcare while moms enjoy a complimentary breakfast and seminar. “We’ve been to seven seminars across the country ourselves this year…we’re always trying to learn the latest and greatest. Healthcare is like technology – it’s constantly changing,” Clarino said. And, they’re goal is to always stay one step ahead.

Clarino and Cirone are dedicated to bettering the lives of their patients. And, Cirone’s passion is truly in pediatric care, as she herself comes from a family of nine chiropractors and received her first treatment the day she was born. Cirone is a Fellow of the International Chiropractic Pediatric Association, and treats an average of 200 kids each week in their office. Children love their office – especially seeing the office dog, Enzo, and hanging out in the treehouse-themed playroom.

Sugar Hill Spine & Wellness has touched the lives of many individuals and families in the Sugar Hill, Cumming, Suwanee, Lawrenceville, Buford, and surrounding areas. But Clarino and Cirone didn’t always envision themselves practicing in Sugar Hill. In fact, upon both graduating from Life University, the high-school sweethearts from New Jersey had plans to move further North along the East Coast. But, “God totally led us here,” Cirone explained, “As we were driving in this area, I had an overwhelming feeling and started crying…I just knew this is where we were meant to be.” And it seems that everything continues to fall in place for them. When the plans to widen Highway 20 went underway, they were disheartened to learn that their office of over a decade would be demolished under the ordinance of Eminent Domain. But in November of 2012, they received a compensation check that allowed them to purchase an even larger office, the foreclosed and abandoned brick building at 5422 Highway 20. Now, they have the ability to grow and treat even more patients than before.

Trinity Broadcasting Network (TBN) is also granting them an opportunity to reach more people. They just signed a deal with TBN to appear on one show each month as featured health experts. The show will air to 2.3 billion people worldwide! Clarino and Cirone feel blessed for the opportunities they’ve been given and are excited to share that knowledge with the rest of the world. They currently take 2-3 interns from Life University per quarter and teach them the real-world practical skills of running a chiropractic center. Clarino announced that he and his wife plan to take the best interns from their program and open offices with them around Metro Atlanta. Although considered a long-standing staple in Sugar Hill, this is only the beginning for Sugar Hill Spine & Wellness. ■