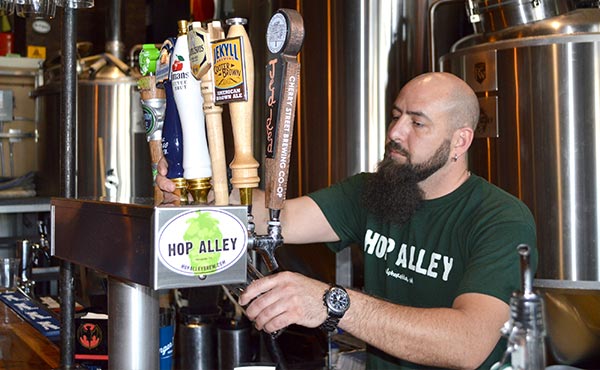 Newer Places to Check Out in the Metro Atlanta Area this Summer
BY: Curtis Stockwell of The Beer Growler, Suwanee

I hope your beer escapades have been going well this summer. I am sure you guys have noticed the Atlanta Craft Beer scene heating up this past year. I wanted to touch on some of the newer places to check out in the Metro Atlanta area. I’ve tried to make my way around to all of the new breweries and brew pubs in the area, but I still haven’t hit them all yet!

Recently, I had the opportunity to check out Hop Alley Brew Pub in downtown Alpharetta and I had a great time. These guys brew their own beer as well as offer a fine selection of Belgian ales and other beers that you won’t see on everyone’s menu. The staff is knowledgeable and extremely courteous, which definitely enhanced our experience. Let’s get on to the beer though! I am an IPA guy and their Hellfire IPA delivered. It has a nice hop profile and a finish that keeps you coming back for more. It went perfectly with the Wisconsin Cheese Curd appetizer, which is a must if you find yourself enjoying a pint there in my opinion. Their McScruff’s Stout also stood out to me; it is an oatmeal stout with an excellent mouth feel. I got smooth toasty notes of roasted malt that gave me a clean finish. Even on the warmer day I visited, I found this beer quite refreshing. With this one; you should give the pretzel and beer mustard a try; the salt from the pretzel and the bite from the mustard pairs well with the semi-sweetness of the darker stout. The in-house beer menu rotates, and I had the chance to taste most of them with a flight they offer, and all of them were very tasty. I am excited to return and see what is coming around next.

On my last beer-venture into Atlanta. I managed to make my way over to a brand new brewery called Orpheus brewing. I believe they had been open for less than two weeks when I visited. The brewery’s back deck overlooks part of Piedmont park and it is quite the place to spend a late afternoon! Their tasting glasses were tulip shaped, which fit their style perfectly as three of the four beers they were offering were Belgian style. Transmigration of Souls, spring double IPA, was the first beer I tried, and I have to say it was my favorite. It was citrus forward and not in your face like some double IPAs tend to be, and masked its high ABV (10%) brilliantly. The other three beers were variations of saisons. I thoroughly enjoyed all three, but one stuck out the most. I am a sucker for sours and The Atalanta, a tart plum saison, really intrigued me. The tastes of plums played together perfectly with notes of spicy yeast and a refreshing tartness that convinced me it was worth my last tasting ticket of the night.

I would highly recommend finishing a day at Piedmont Park with a stop at this brewery at least once this summer.
Wild Heaven Craft Beers opened their brewery in Avondale Estates on June 13th after a much anticipated wait, and making my way down there for a visit is high on this summer’s to do. Their beers have been on Georgia’s Craft Beer scene for quite some time and it will be very nice to be able to try some Ode to Mercy or Invocation straight from the source. Another brewery that I am excited to visit is Eventide; they are relatively new and their beers have finally begun to get distributed this far north of the perimeter. I am a huge fan of their Pale Ale and can’t wait to see where it’s brewed.

For a list of most of Georgia’s breweries and brew pubs, check out www.georgiacraftbrewersguild.org and find one to go enjoy. We are in the midst of a beer revolution in Georgia, so if you happen to find yourself looking for something to do, check out some of our local friends and show them how much you love having them around. Cheers! ■