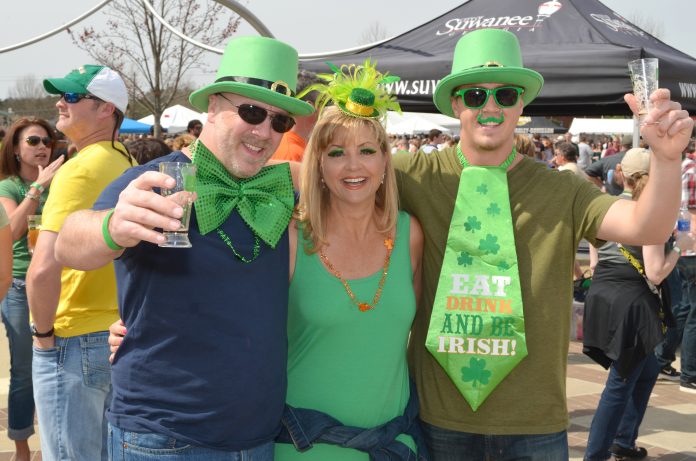 Nearly 6,000 beer lovers will flock to Suwanee Town Center Park on Saturday, March 14th for the 5th Annual Suwanee American Craft Beer Fest, presented by The Fresh Market. Suwanee Beer Fest has become widely known as one of the premier craft beer events in the Southeast. With unlimited sampling of over 300 craft beers, it has become a destination for beer enthusiasts nationwide! Named “Best Festival in Gwinnett” by the 2014 Gwinnett Daily Post Reader’s Choice Awards, the event organizers and their community sponsors are committed to making the 5th annual festival the best one yet.

The stakes have been raised with the addition of Suwanee Beer Fest’s inaugural Brew Battle! Powered by DraftServ Technologies and sponsored by The Fresh Market and Spectrum Packaging – this epic showdown will feature 10 Georgia breweries, each vying for the title of Brew Battle Champion. Ten local breweries were invited to put their best beer forward as nearly 6,000 Suwanee Beer Fest attendees will decide who reigns supreme.

But, these local breweries aren’t the only ones going head-to-head on March 14th. Sponsored by Brew Depot, the Suwanee Beer Fest Home Brew Competition includes over 100 home brewers and 250 different beers this year! The “Best in Show” home brew winner will be crowned onstage during the event. That is, if Atlanta’s award–winning 80s tribute band, Mad Margritt and Chicago’s very own Fulkinetic, don’t burn it down first with their awe-inspiring rock & roll antics!

The Suwanee Beer Festival is dedicated to supporting and celebrating the American craft beer culture while also giving back to the community. As tradition holds, a large portion of total proceeds will benefit Kingdom Kids, a local nonprofit organization that grants wishes to children with life-threatening illnesses. For more information and to purchase tickets, visit suwaneebeerfest.com. This event sells out each year, so don’t wait! Follow “SuwaneeBeerFest” on Facebook, Twitter and Instagram for regular updates.

WHAT TO EXPECT AT THE 5TH ANNUAL SUWANEE BEER FEST:

S&S Ace Hardware in Buford: Serving the Community for Over 30...