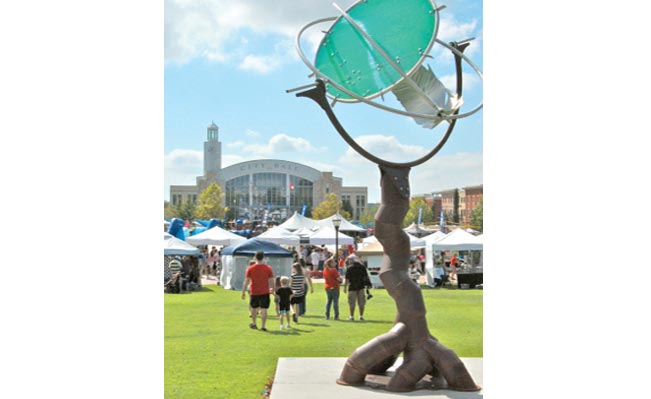 Suwanee SculpTour is a 1- mile walkable art exhibit located in Suwanee Town Center. As part of the City of Suwanee’s public art initiative, the exhibit is designed to bring the community together through imagination and curiosity.

The 2013-15 Suwanee SculpTour has officially ended, but 2 of the 14 pieces from the 22- month long exhibit will remain in Suwanee as part of the City’s permanent art collection. The Suwanee Public Arts Commission, using donated funds, purchased “Iron Canopy” by Phil Proctor as the People’s Choice award winner. Dick Cunningham, of Ippolito’s, purchased “Who Let the Dogs Out?” a collection of sculptures by Jim Collins. “We’re purchasing the scuplture in memory of our granddaughter’s Uncle Rob,” said Cunningham. He plans to donate the works to the City where they will remain in Suwanee Town Center Park for the next two years.

Throughout Suwanee, more than 20 public art pieces are on permanent display. The 2015-17 Suwanee SculpTour exhibit will feature 17 artworks in and around Town Center, and officially opens May 16th as part of the Arts in the Park Festival.