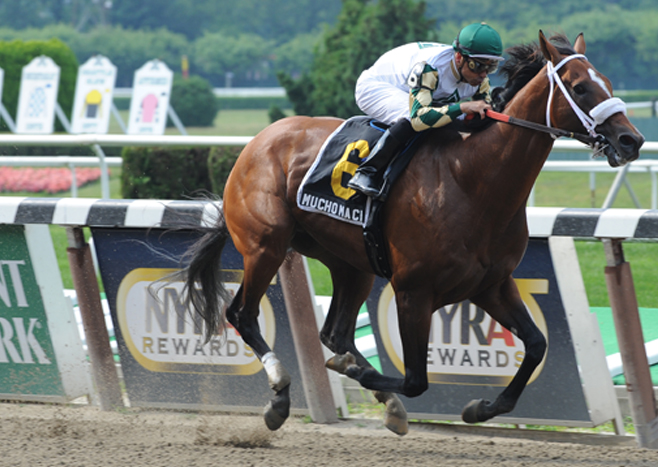 Mucho Macho Man, reigning Breeders’ Cup Champion, has retired at 6 years old, with $5.6 million in earnings over his racing career. This racehorse graced the cover of the May/June 2011 issue of Suwanee Magazine. Owned by Suwanee residents, Dean and Patti Reeves, Mucho Macho Man will enter stud at Frank Stronach’s Adena Springs Farm near Paris, Kentucky for the 2015 season. Dean Reeves shared; “Mucho Macho Man gave Patti and our team enormous pleasure. He has generated so many fans, both in the state of Georgia and nationwide. We are extremely excited about him joining the star- studded roster at Adena Springs, and look forward to supporting him as a stallion and racing his progeny.” His career includes having won or placed 20 times in 25 starts including 3rd place in the 2011 Kentucky Derby and 1st place in the 2013 Breeder’s Cup Classic. Mucho Macho Man has over 9,000 fans on facebook and has helped draw attention to the sport of horse racing and gained support for the Georgia Horse Racing Coaliton (GHRC), who are working to bring horse racing to Georgia. For more information on Mucho Macho Man, visit his Facebook page or website muchomachoman.com.

For more information on the GHRC, visit gahorseracing.org.

Where to celebrate National Donut Day