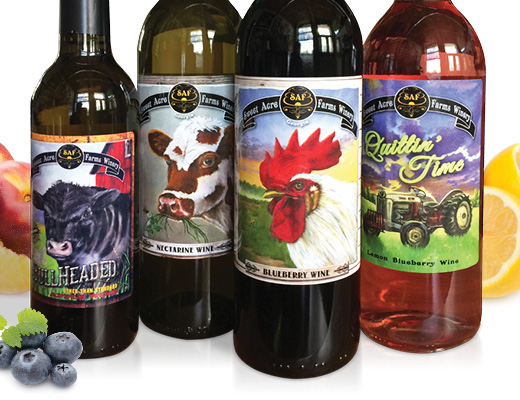 When Matthew and Lindsey Vrahoites purchased a large plot of land in Alto, Georgia (40 miles northeast of Suwanee) back in 2010, they never dreamed of being farmers or gardeners, much less winemakers. They had recently gotten married and were employed full-time, but always had dreams of being selfemployed and a passion for working outdoors. They realized they needed to find a way to make their newly acquired land pay for itself, so they began to clear the land, plant gardens and put up beehives. They began marketing themselves as a “u-pick” garden destination, a place to purchase local fruits and vegetables and fresh honey. With the extra produce, they began experimenting with blackberry jams and selling them at local farmers markets. As they began to sell their products, their freezer quickly began to overflow with extra blackberries. “Lindsey was tired of making jelly, so I thought, why not make a blackberry wine,” explained Matthew.

The first couple of batches of wine that Matthew ever created were assortments of blackberry, apple and fig. “The fig wine I had to dump,” he jokes, but he found far more success in his other batch, which is still currently being sold at the winery as “Bramblin’ Sam.” The glowing reviews about the wine from his friends and neighbors piqued the couple’s interest in winemaking and they began researching the market. They learned that while some wineries produce fruit wines, there was no winery dedicated solely to producing 100% fruit based wines, which created their dream to open Hall County’s first winery.

In May 2014, Matthew quit his job and jumped into the development of the winery with both feet. “We sold everything,” Matthew says. “We downgraded, sold our cars and moved into Lindsey’s parents’ basement.” They began the lengthy process of opening a winery and finally began wholesaling their wine through Mercier Orchards in Blue Ridge, GA in September 2014. “They wanted to take a chance on us,” says Matthew. “If it wasn’t for them, we probably wouldn’t have been able to keep going. That was our introduction into the wine community.”

Finding success with wholesaling, Matthew reached out to the event organizers of the 2015 Suwanee Wine Fest for an opportunity to attend the festival and showcase their wines. In return, he received an even larger opportunity – the chance to sell their wine directly to the consumer. “We sold so much wine that day. We knew we were really on to something,” Matthew explains.

Several months later in April 2016, the winery, named Sweet Acre Farms, was finally ready to open their doors and the community poured in with support. The winery is a reflection of both Lindsey and Matthew’s passion, which is evident in all the small touches seen around the tasting room – a tin roof made from a chicken coop, a bar hand crafted by Matthew and Lindsey’s dad, and wine labels designed after Lindsey’s mother’s paintings. Matthew and Lindsey both work in the winery explaining the tasting notes to their guests.

Now, one year later, Sweet Acre Farms recently celebrated their one-year anniversary with an event that brought thousands of people. Customers were lining up to get a taste of the best fruit wines in the state, relax in the rocking chairs on the deck, listen to live music and enjoy a day at the 46-acre winery.

“People told us if we did 1,000 cases in our first year, we were on the right track,” explains Matthew. “Well, we did 1,200 and still sold out. Next year we are tripling our production.” Using almost all Georgia fruits, Matthew has been able to find the perfect blend of fruits without adding water, using artificial flavors, coloring, concentrates or filtering. Wines like “Quittin’ Time,” an easy-drinking lemon wine, and “Bullheaded,” a bourbon barrel aged apple wine that won an award for “Best Fortified Wine in the State,” keep their customers coming back.

“Don’t be afraid of the wines we are making,” Matthew says. “We produce wines made without the grape, so we encourage people to leave their idea of what a wine should be at the door. Sometimes people see the name Sweet Acre, and think we produce sweet wines. We produce something different. I am just a home wine-maker gone crazy, who happens to know what he’s doing.”