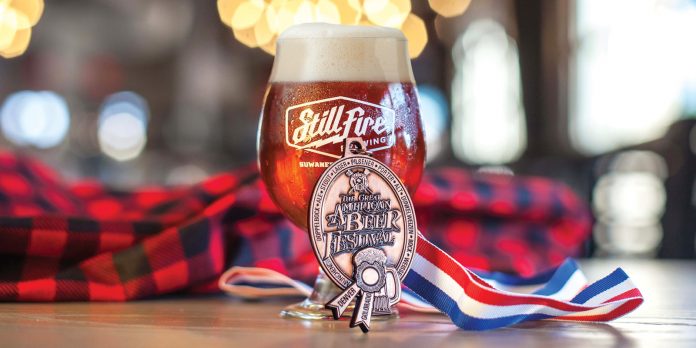 In October, Suwanee’s hometown brewery, StillFire Brewing, officially celebrated two years in operation. During that time, the brewery has received 18 awards for its beer, making it the most award-winning new brewery in Georgia. This title is certainly an impressive feat, but should come as no surprise given the talent of its brewers, namely head brewmaster Phil Farrell.

In September, StillFire took home its latest award, a bronze medal at the world’s largest and most prestigious commercial beer competition: the Great American Beer Festival in Colorado. The brewery was recognized in the Scotch Ale category for its signature Kilt Chamberlain Ale, a 9.5% Scotch ale that features a delicious mix of caramel, dark fruit, nuts, chocolate and a wee bit of peat smoke.

While Kilt Chamberlin is indeed a delicious brew, what makes this beer so special is the story behind it and its evolution into the brewery’s second anniversary beer release, Thoroughly Good. And that story starts with head brewmaster Phil. The naturally talented brewer came to StillFire with some already impressive credentials under his belt. He had judged every preeminent beer contest in the world, including The Great American Beer Festival, The World Beer Cup, Copa Cerveza (Mexican Beer Cup), The Great British Beer Festival, and more. As a Grand Master Level V Beer Judge of the BJCP (Beer Judge Certification Program), Phil was ranked in the top 12 judges in the world when StillFire opened in October of 2019. He’s also a well-traveled beer connoisseur, having tasted beers in every state in the U.S. and every country in Europe, as well as places as far flung as the Vatican City and Turkey. Heck, he even won the prestigious Wynkoop Brewery “Beer Drinker of the Year” contest in 2011, earning him beer for life at the Colorado brewery. To say Phil knows good beer would be an understatement.

Over time, Phil went from being an accomplished homebrewer to manning the tanks at StillFire, and he’s done so without losing any of the drive or creativity that he came into the brewing business with, which is evident by all of the awards his recipes have gathered over the past two years. But let’s get back to Kilt Chamberlain.

“One of the things that got me into Scottish Ales in general was just the fact that they were very complex in a malt sense and they had a character that could be described sometimes as smokey, sometimes as peaty, and sometimes there was just an interesting malt character you just couldn’t put your finger on,” Phil says. “The difference between a Scottish Ale and a Scotch ale is that if you say something’s a Scottish Ale, it’s more of an everyday drinker. It can be very low alcohol, as little as 3.5%, or can be more like your standard middle-of-the-road beer at 5% or up to 6%. You switch from Scottish Ale to Scotch Ale when you get stronger, like 8% — which some people will describe as a ‘wee heavy.’”

“I was playing around with those recipes and brewing a few and I started to really get down to picking the right malts and trying to get a good malty base, and by that point I had been brewing all grain as a homebrewer and I had been doing it for quite a few years. Kind of like Goldilocks, I narrowed it down to about six grains that I was using,” Phil continues. “I put this beer together and I said, ‘Wow this one is really good.’ I’ve done smaller versions of it as a Scottish Ale, and I played with it and I thought, ‘No, this will really shine as a Scotch Ale. I entered it in a couple of local contests and it did really well.”

The first few batches of Phil’s winning Scotch Ale recipe went through a few different names, StillFire Brewing’s brewmaster Phil Farrell has led the team to winning 18 awards (so far) for its beers since opening in October 2019, making it the most awarded new brewery in Georgia. including If It’s Not Scottish It’s Crap, after a line from a Michael Myers “Saturday Night Live” sketch. When Phil entered it into the National Homebrew Contest, he called it The Next to Last King of Scotland because The Last King of Scotland was a movie that was out at the time.

“That particular one I dialed in a lot of what I was doing and I said, ‘Okay, this one is going to be really good,’ and I put it into a local contest and it won,” Phil says. “The National Homebrew Contest is a tiered kind of contest where you have to enter a regional contest and if you win the regional contest then they let you enter the beer in the national contest. It went right through and I ended up at nationals. I thought I was going to rebrew it because I had enough time, but then I second guessed myself. This version was so good and the time on the beer — just an extra six weeks — was not enough to diminish it at all. So I said, ‘I’m going to ride this horse. This one is the one.’ I put it in the contest and it won a gold medal. It was the best beer in that category that year.”

After winning the Homebrew Contest, Dow Scoggins of the U.S. Open Beer Championship reached out to Phil to congratulate him on his win and to ask him to enter it in the U.S. Open. “I entered it into the U.S. Open and that beer beat all the professionals that year, and I won a gold medal. I never stopped to think about that. I thought maybe that happens all the time or that it wasn’t that unusual. But it turns out that in the intervening 12 years I am the only homebrewer who has ever won a gold medal at that competition. So I was like, ‘Wow!’” Over time, that award-winning beer evolved into StillFire’s Kilt Chamberlin.

In fact, Phil says Kilt Chamberlin was his “resume” beer when he met with the owners of StillFire during the planning stages of the brewery. They loved the beer so much Phil was given the job of brewmaster on the spot. “While the brewery was under construction, I took Kilt Chamberlain and aged it on whiskey-soaked wooden spirals,” Phil says. “The beer was so delectable the team felt the bourbon versionof Kilt deserved a new name: Thoroughly Good. We entered Thoroughly Good into the 2019 Can Can Awards and won a gold medal.”

Just after StillFire Brewing opened its doors in 2019, the team brewed a batch of Kilt Chamberlain and placed it in American Spirit Works bourbon barrels. The beer was barrel- aged for 18 months, bottled and then released at the brewery’s 2nd anniversary this past October. Phil describes the 13.6% ABV result as complex, strong and wonderful with big notes of oak and vanilla, along with lots of dark fruit that make it a true malty delight.

Kilt Chamberlain and Thoroughly Good are a great representation of the talent and skill StillFire Brewing has to offer. If its progression from an award-winning homebrew to a limited-edition barrel-aged release is a testament to the future of the brewery, we think we’ll order one more thoroughly good beer.