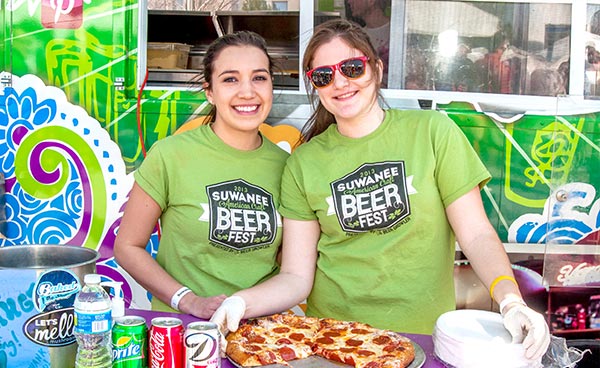 BY: Curtis Stockwell of The Beer Growler

The season is upon us! What is this I speak of? Beer fest season but of course, where strangers become friends, the beer flows like wine, and where beautiful people instinctively flock like the salmon of Capistrano. On March 15th the Fourth Annual Suwanee American Craft Beer Fest will be held at Suwanee Town Center and it is certain to be a good time. From 1 p.m. to 5 p.m., there will be more than 300 beers available for patrons to try. Although over 300 beers in four hours definitely seems a little daunting, and there is honestly no way to taste all of them, I am going to give you a brief guide on how to maximize your experience and try as many beers as possible in a safe fashion.

Before we get to anything about the beers, let’s make sure we are all properly prepared for a fun day of tasting beer. First and foremost make sure you have a safe method of transportation home. There are plenty of transportation resources available to festival goers, so please take advantage of them. With that being said, it would a good idea to start hydrating the day before so you have plenty of fluids in you the day of the fest. Make sure you have a big breakfast so you don’t start the day on an empty stomach. Trust me, if you start the day without anything in your tummy, you are going to have a bad time . If you have attended before, then you know there will be vendors offering food. So make sure you take advantage of them throughout the afternoon. The next advice I cannot emphasize enough, make sure you bring some SUNSCREEN! It may not necessarily be hot outside, but standing in the direct sun for hours can really put a hurting on those of us who are coming out of the winter months. Also, once you start down the path of tasting a few beers you may not notice the burn happening, which will come back to bite you after the beer fest has concluded. Finally, drink some water in between every few beers! I know beer is mostly water but that doesn’t count…hydrate!

Now that the boring stuff is through, let’s get into the beers! Normally in a beer-tasting situation you would want to go from lighter to darker in color as sometimes the flavors of darker beers will mask the flavor of the next lighter beer you try. This is a general rule of thumb but can be mitigated by having a bite of something to eat in between. In a setting like the beer fest where you will be trying quite a few beers, I would recommend starting off with lighter beers not only for their flavor but also for their lighter alcohol content. In this respect I would go for the Lagers, Pilsners, Ciders, and Wheat beers. These are typically very refreshing and a good way to get your taste buds going. On a side note though, I would leave a few of these styles for later in the day to try when you get into the darker stuff because it will be a nice refreshing change from the malty beers. Next in line I would go for the pale ales and the IPAs. India Pale Ales and will range widely in flavor, color, and ABV, so make sure you ask the servers a little about the beers before you try them! Since these beers are bitter and hoppy, they tend to burnout your taste buds quickly so keep that in mind! If you are going to be trying a few quickly in a row, go for the hoppiest/biggest IPA last.

Once you start to transition to the darker beers, go for the brown ales first, then followed by porters and stouts. This is just a natural progression of ABV as well as strength of flavor. Make sure to grab yourself a pretzel necklace or a bag of chips because having something salty will help to balance out the sometimes sweeter flavors of darker beers! Most American brown ales and porters hover in the 6 percent range, whereas stouts tend to be a little higher in gravity so keep that in mind as you work through all of the different breweries.

This year is going to be amazing and we can’t wait to see you guys there! Cheers!!!