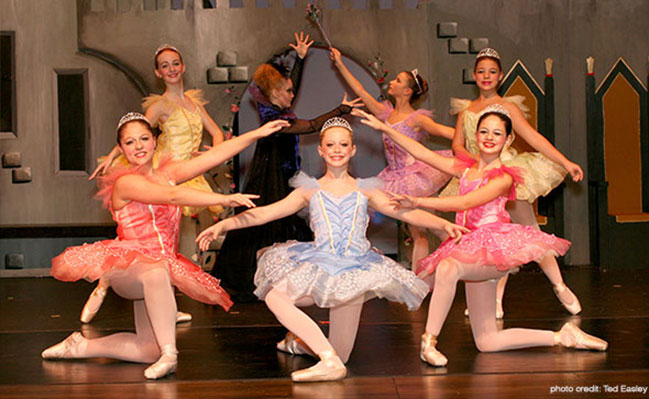 Business Spotlight on: Suwanee Academy of the Arts and Suwanee Performing Arts

When you think of Suwanee, images of neon lights, Broadway performances, musical theater and ballet might not immediately come to mind. But, that is sure to change thanks to Suwanee Academy of the Arts owners, Patty Etherton and Bernie Bock-Davis, whose students continue to find their talent and perfect their craft in classical ballet, jazz, drama and music.

After opening in September 2003, Etherton and Bock-Davis, as well as the entire community, are celebrating Suwanee Academy of the Arts’ 10-year anniversary. Etherton and Bock-Davis, who are both Suwanee residents said they loved their home town, saw the many gifted and talented people who live in the area, and noticed the city’s evident love for the arts and decided to open their studio in Suwanee.

Just getting started and with little funds, the two said they did most of the work – plastered walls, painted ceilings, laid floors, and fought termites, all with no air conditioning.

“Luckily we loved our jobs so much we would work for free, because we did,” they said, adding that time with the kids has made up for all the hard labor.

Starting with just 64 students and two studios, their first big production was an original musical the two wrote called “A Stranger Comes to Town,” one of a series titled “The adventures at Suwanee Station” about a stranger who comes to Suwanee after just getting off the train.

They recalled how they rented the pavilion in Historic Suwanee and they said it was the perfect setting for a show about a train depot, only feet from the spot of the old train depot. “We set up lights and sound, created scenery, and made all the costumes and props for the 17 elementary school age kids,” they recalled. “It was great! The kids loved it!” Etherton and Bock-Davis were a likely pairing after meeting at church in 1999 while directing a Christmas pageant together. It was there they recognized that hey shared the same passion for inspiring excellence through the arts, and thus, Suwanee Academy of the Arts was born. They also discovered that both had used art to overcome adversity: Etherton overcame her shyness through music and Bock-Davis used dance to overcome being bullied at school.

“Our art brought out the best in us, so we know firsthand how what we do affects the young people we touch,” Etherton and Bock-Davis said.

Their expectation levels are high and while others settle for good enough, the duo expects more – nothing less than the best out of their students. And they realize that by pouring their hearts into their work, the students respond by giving more than they believed possible.

“This genuine response to the arts is character building and is the very thing that allows a young artist to grow into their own,” they said. “Just like eating healthy we knew that building strong healthy dancers would be built with strong technique.

Even though the culture wants to let us believe in gimmicks or tricks, they are merely shortcuts that can ultimately do harm. We believe what is best for the child is to grow up a confident capable member of society (who loves the arts). This expectation doesn’t just apply to technique, but also to the student’s character.

“Now we all have a little diva in us from time to time, but we don’t cultivate that attitude here,” they said. “Art loses its sense of rightness when it is suffocated by the artists. At the Academy we all focus on the end result.”

But it wasn’t long after opening, that the owners discovered a missing piece. They said the academy was growing fine artists, but there was little opportunity for them to perform. So they helped to start a non-profit organization, Suwanee Performing Arts, that’s committed to creating performance opportunities in the community, such as Broadway in the Park that brought “Shrek the Musical” to Town Center Park in July 2013 and the Suwanee Youth Ballet that just performed “Sleeping Beauty” at the new Buford Theater and Community Center in October, among many others.

Currently, they have 17 teachers and more than 500 students that attend the more than 57 classes weekly in music, dance and drama. They have seven private lesson rooms, a room designed for Kindermusik, a new dance studio called Main Street Playhouse, and they have even added a workshop for building sets and a costume shop. The owners say their ultimate dream is to have a theater in Suwanee, and the one thing they said they have learned in the past 10 years is that their dreams have a tendency to come true.

S&S Ace Hardware in Buford: Serving the Community for Over 30...