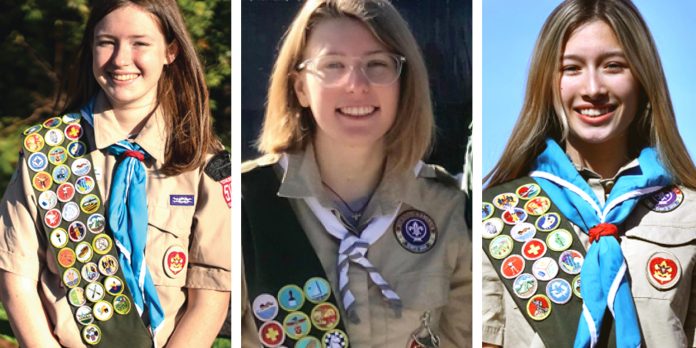 In our last issue we told the story of Lena Towne, one of the country’s first female Eagle Scouts. In this issue we are excited to announce that three more girls have earned the rank of Eagle Scout, celebrating in a ceremony that took place in February. Joining Lena are Audrey Kenney, Sara Whittier, and Madison Burrell.

Audrey Kenney is a freshman at North Gwinnett High School and her Eagle project was to build a hammock village at Epiphany Lutheran Church. She has earned the Bronze Award in Girl Scouts, played violin since 2nd grade, and attended both the county science fair and the Readers Rally championship two years in a row.

Sara Whittier is a senior at North Gwinnett High School and her Eagle project was building 15 dog beds and collecting food and supplies for Planned Pethood. Sara grew up tagging along on many of her brother’s outdoor experiences, and she is very thankful to have had her father with her throughout the entire scouting adventure. These opportunities gave her a love of the outdoors, specifically hiking and backpacking.

Madison Burrell is an 8th grader at North Gwinnett Middle School and her Eagle project was to create 20 mason bee houses to be installed at Gwinnett County parks. She has also earned her Bronze Award in Girl Scouts, where she was active for six years. She has served for years as an acolyte at St. Columba’s Episcopal Church, and staffed Vacation Bible School. Congratulations Audrey, Sara and Madison!

Broadway in the Park is Back!