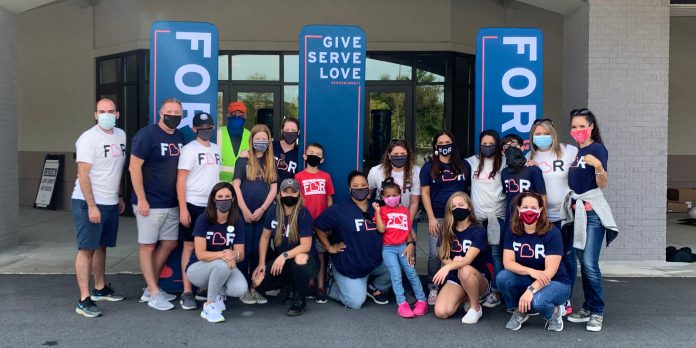 Since 2007, North Point Ministries has encouraged the attendees of its eight Atlanta-area churches to give, serve, and love their community through the annual generosity campaign Be Rich. What started 14 years ago with three churches has grown into a global movement of generosity from 68 churches in 21 states and six countries. The name of the giving campaign, Be Rich, comes from scripture. In a letter to the apostle Timothy, the apostle Paul commands others to “be rich in good deed, and generous and willing to share” (1 Timothy 6:18). It is the desire of every church that participates in Be Rich that their attendees give generously, serve locally, and love those around them.

Every dollar collected through Be Rich is given directly to local and global nonprofit partners. Since the beginning of the initiative, this network of churches has served more than 492,000 hours and given almost $58 million to more than 610 nonprofits and communities around the world. As a result, many lives have been directly impacted.

Gwinnett Church is a consistent part of Be Rich and views the campaign as an opportunity to showcase their desire to serve and support our community — and to be known for being FOR Gwinnett. Some of the projects Gwinnett Church has supported through Be Rich include donating pantry items for North Gwinnett Cooperative Ministries, funding a GED program, supporting a Microsoft Certification program, and providing technology support to women victimized by sexual exploitation being served at Wellspring Living. In addition, donations were made to install telemedicine services at Good Samaritan Health Clinic of Gwinnett and to provide family care model support to children living in a crisis situation at Eagle Ranch.

Be Rich also supports the efforts of several international organizations, including funding three international border stations to rescue women from trafficking, supporting shipments of personal protective equipment to underserved communities, and funding counseling and therapy for underserved children and adults.

Gwinnett Church’s goal through Be Rich is to give, serve, and love its community. To learn more about Gwinnett Church or Be Rich, visit GwinnettChurch.org.