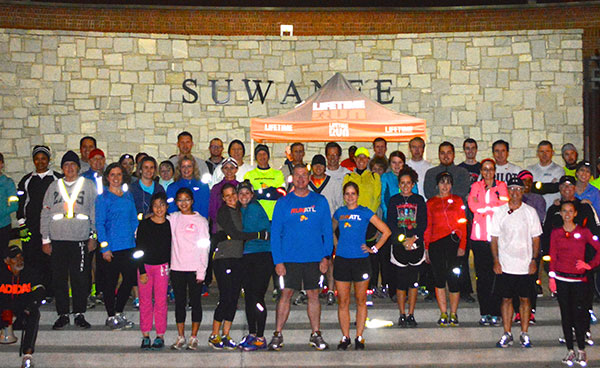 As I glanced around Big Peach Running Store in Suwanee, looking for Kat it was not difficult to locate her. I immediately spotted a fit, energetic, happy and social woman. As I watched her initiate conversations with employees, customers and other Big Peach runners, she seemed like the type that knew everyone and that everyone liked.

I later learned that she considers the Big Peach Running Group her “running family” and support system. Kat is one of those rare people that loved running from the moment she tried it. She said that running relaxes and calms her whenever she is feeling stressed. Realizing that it isn’t for everyone though, she said, “Running is an amazing sport, but its hard if you don’t love it. You have to find what works for you.”

She first fell in love with the sport at age 25 when she lived in Japan and her weekly workouts included running around Hiroshima castle, “it was so beautiful,” she said, “I got to run my first 5k in Japan!” But, her health and fitness took a slow and steady decline when she moved back to the States, injured her back, gained weight, was working long hours, got addicted to cigarettes and had a social lifestyle that revolved around food and drinks.

Kat had a bulging disc in her back that hit a nerve, making it extremely painful to even sit down. But, frustrated with being out of shape and wanting to get back to running, she started the slow and painful process of physical therapy. She said, “I had to take baby steps, I just started walking at first and eventually felt myself getting stronger.” She then decided to join Weight Watchers and was able to lose forty pounds through the program.

It took persistence and dedication, but Kat eventually was able to start running again. At that point, she realized there were other areas of her life that she needed to change in order to completely turnaround and create a healthy lifestyle for herself.

Once she was able to run five miles again, she decided to quit smoking. She noticed her strength and endurance was building on a weekly basis and she didn’t want to hinder that by smoking. Smoking cigarettes would have a literal effect on her run the next day. “One night I was out with friends, had 1 cigarette and literally couldn’t even run 1 mile the next day…at that point I quit for good,” she said.

Kat added, “I want to tell people to surround themselves with positive and supportive people. I rid myself of toxic friends and negative people. Staying positive will keep you going, and support from others makes it fun. I have my running family and they make me feel like anything is possible.”

Kat is an inspiration to the other Big Peach runners in that she makes it a priority to run as often as possible. She works in Habersham, lives in Brookhaven and stops in Suwanee to run 3-4 times a week, on her drive home. Even with long hours and an extremely long commute, she makes running a priority in her life. “You always have time!” she declared.

She learned that running cannot be the only thing you change though, “diet is very important as well,” she added. She also is always sure to “do the work before {having} fun.” She still loves to go out with friends and her fiancé, eat good food and maybe have a couple drinks, but does not let it interfere with her training schedule.Her next goals: to run a sub two-hour half marathon in 2013 and run a full marathon within the next two years!

We will be cheering for you, Kat!

*Big Peach Running Group is a free running group, open to the public, that meets at the Suwanee Town Center Park stage  every Tues & Thurs at 6:30pm.