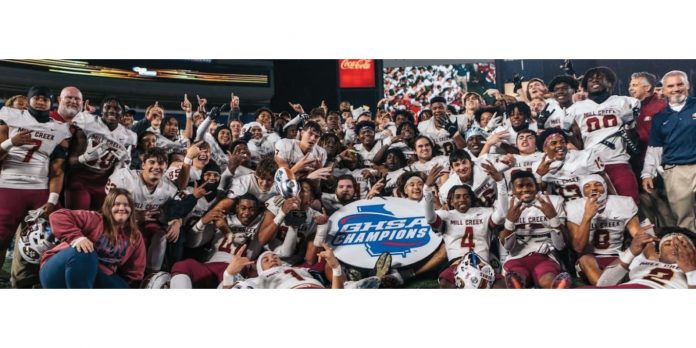 The Mill Creek High School Hawks won the first state football title in school history with a 70-35 rout of previously unbeaten Carrollton on December 10 at Georgia State’s Center Parc Stadium, giving Gwinnett its third straight state champion in Class AAAAAAA. The Hawks’ 70 points broke the state record for most points scored by one team in a state final, according to Georgia High School Football Daily records, besting the old mark of 62 set by Valdosta in 1971 and Warner Robins in 2020.

Mill Creek set the pace early in the game by scoring on running back Cam Robinson’s 66-yard run and on an 88-yard return of a blocked field goal by Jamal Anderson. Five of the Hawks’ touchdowns were 48-plus yards. The Hawks ran for 406 yards, threw for 191 yards, and had 660 yards in kickoff returns. Congratulations, Hawks, on your historic win!

The Next Stop Hosts Holiday Dinner for Family and Friends