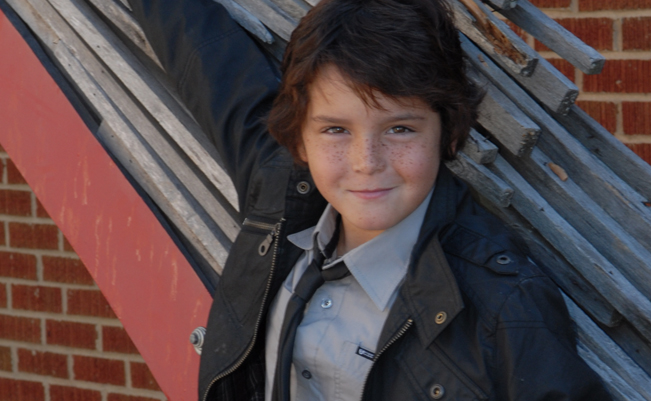 You may have seen him out and about at one of the community events at Suwanee’s Town Center Park. Or perhaps ran into him with his family at one of the local shops or restaurants in the community. You may have seen him on the small screen in television shows such as Army Wives, Mad Love, and in the locally filmed and popular series, The Walking Dead. But now he can be seen on the big screen capturing the hearts of movie goers everywhere with his dark brown hair, dark eyes, freckled face, adorable impish grin, and full of personality to boot…

Suwanee resident, 11-year old Noah Lomax is just like any other kid in the metro Atlanta suburb, except…he just had his movie debut in the film, “Playing for Keeps,” starring alongside an all-star cast of actors including Gerard Butler, Jessica Biel, Catherine Zeta- Jones, and Dennis Quaid that opened in theaters Dec. 7.

In the movie, Noah plays Lewis, the son of Stacie, played by Biel, and George, who is a former soccer player hoping to re-establish a relationship with his son, played by Butler.

But that’s not all. Come February Noah will be showing his acting chops again on the silver screen in Safe Haven, a movie adaptation of the Nicholas Sparks novel of the same name, in the company of actors Josh Duhamel and Julianne Hough.

Noah, whose sister is fellow actor Maddie Lomax, said he doesn’t usually get star struck when he meets other actors, but when he met Duhamel and Hough, it

was a different story.

“I actually knew who they were,” he said. “A little part of me was star struck. The only person I was kind of a little bit more star stuck by was Cobie Smulders because she’s from one of my favorite movies, The Avengers,” he said. In addition to the actors, Noah has also met Fergie and Ryan Seacrest.
Ironically, with Noah’s character named Josh and Josh Duhamel in the same film, he said it could sometimes be a little confusing on the set, and when someone called Josh they both started walking in the same direction.

“Most of the time they called me Noah, but sometimes they called me Josh. But they never called the real Josh by Alex (Duhamel’s character’s name),” he explained.

Noah said he loves acting but the scenes aren’t always easy. He recalled an emotional scene in Safe Haven where his character slips into the water, hits his head, and his father, played by Duhamel, has to jump in and save him and he had to cry in front of a lot of people.

“It was just really, really hard,” he said. But he nailed the scene and everyone on the set clapped afterward.

Auditioning is a big and ongoing part of acting. When auditioning, Noah said he experiences some jitters, but once on the set he’s cool and at ease.

“It’s easy (on the set) because it’s like doing it in front of my parent’s friends kind of,” he explained. And with his busy schedule he gets help and support from his family, his father Nick and his mother, Michelle.

“A lot of help,” he said. “They drive me there and help me remember my lines.”

Although Noah likes to travel, he said he’s always happy to get back home to his 3 year-old boxer, Romeo, and to Suwanee with Town Center Park and all the events.

“I just really like it,” he said, talking about Town Center Park. “You get to run around and it’s like an open space…If I were to move I’d probably want to move to another neighborhood in Suwanee.”

When he’s home, he likes to hang out with his friends, play games outside, and he recently had a lot of fun at Sky Zone Indoor Trampoline Park. When hanging with his family, Noah said they like to go to movies and out to eat. A couple of his favorite restaurants around town are Twisted Taco and Cinco where he likes to order his favorite – cheese quesadillas.

He also loves to play sports. During the recent football season he was on a North Gwinnett Bulldog youth team where he played defensive end and defensive tackle. He actually missed the first couple of weeks of practice because he was away filming Safe Haven. But Duhamel, who played ball in college, didn’t let him off the hook. Noah said Duhamel spent an entire day at the beach with him giving him some personal training.

As for the experience in the acting world, Noah’s mother said they feel blessed and lucky, but they also want Noah to have a normal childhood. And so far, taking it day by day, they have been able to strike that balance.

Noah says he loves acting, but what does he want to do when he gets older?

Watch for Noah in “Safe Haven” in theaters in February.