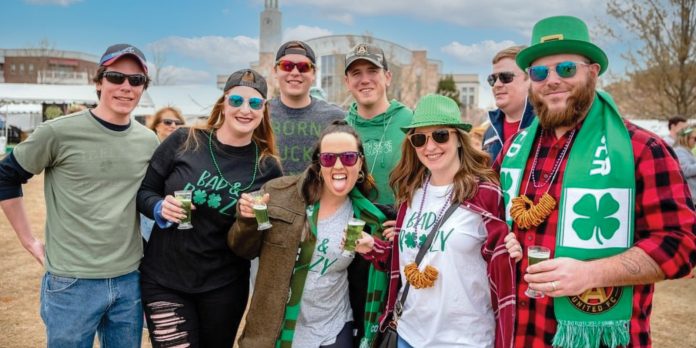 It was more than just the luck of the Irish when Georgia’s Suwanee American Craft Beer Fest was recently voted the No. 1 Beer Festival in the country in USA Today’s 2022 Best Beer Festival contest. Taking place on St. Patrick’s Day weekend, the festival doubles as the largest craft beer festival in Georgia and one of the most highly anticipated St. Patrick’s Day weekend events in the state. Boasting a selection of more than 350 craft beers from 100+ breweries, the festival draws an annual attendance of more than 6,000 craft beer fanatics from across the country (including Florida, Tennessee, Illinois and even California and Washington) to experience the ultimate celebration of American craft beer. Attendees come dressed head-to-toe in St. Paddy’s green with kilts, shamrocks, green beards and more, making for a truly unique beer festival experience.

Event organizers spend an entire year planning the event down to the smallest detail. “Being officially voted the No. 1 Beer Festival in the country is a testament to the community and culture surrounding Suwanee Beer Fest,” said Tiffany Belflower, Suwanee Beer Fest’s event coordinator. “For 11 years, each aspect of the festival, from the breweries, beer, games and entertainment to the vendors and sponsors, has been curated to create an experience that has become what many feel is ‘Suwanee’s Favorite Day.’”

The annual ode to craft beer is also a communal experience where like- minded people gather together to enjoy an afternoon exploring and learning about beer — while also having a really great time. Over the past decade, the festival has hosted an impressive musical lineup that includes nationally recognized cover bands like Departure and Slippery When Wet, as well as a variety of festival games such as axe throwing, giant beer pong and cornhole. The festival is also known for its annual Homebrew Contest, a competition whose winners have gone on to open their own successful Georgia breweries, including Jekyll Brewing and Social Fox Brewing.

While Suwanee Beer Fest may make headlines for its incredible selection of craft beer, event organizers put just as much thought behind their philanthropic efforts. To date, Big South Productions, the metro Atlanta-based event production company behind Suwanee Beer Fest and its sister events, including Suwanee Wine Fest, the Beer Chaser 5K and the Spooky Spirits 5K, has given more than $170,000 to local charities and organizations through proceeds raised from its events. One such nonprofit is Cooper’s Crew, a local organization dedicated to finding a cure for Clear Cell Sarcoma formed in memory of local North Gwinnett student Cooper O’Brien. Cooper’s Crew works to fund research for treatment options for Clear Cell Sarcoma and grant scholarships to local students facing a tremendous amount of adversity. Their work has been instrumental in the founding of The Clear Cell Sarcoma Foundation, whose mission is to make Clear Cell Sarcoma survivable through education and scientific research.

Don’t miss out on a chance to see what shenanigans are in store for the 2023 “Best Beer Fest in the Country.” Mark your calendar, Suwanee Beer Fest makes its way back to Town Center Park on March 18, 2023. Tickets officially go on sale January 13, 2023, at noon. To purchase tickets and for more information, visit SuwaneeBeerFest.com.

Worth a Tackle: Big Hacks for the Big Game

Ways to give back this holiday season