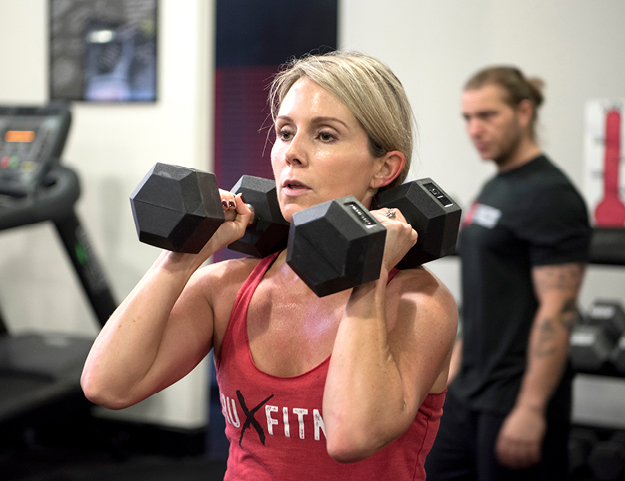 The mission of Crux Fitness is clear from the moment you step through the door. Written in large print on the wall are three words that complete the gym’s mission statement: “embrace the suck.” And that’s the one thing Certified Personal Trainer and Sports Nutritionist Dan LeBlanc expects of everyone who works out at Crux. “My trainers know they’re not allowed to go easy on anybody,” LeBlanc said. “We eliminate the possibility of someone taking the easy way out.”

Located on Moore Road off Peachtree Industrial Boulevard, LeBlanc opened Crux in June 2017 with the goal to help people reach their full potential. During a stint in the Navy following high school, LeBlanc took the long route to realizing his fitness potential and eventual calling. He had let himself go, and hit what he considered his rock bottom. “When people describe rock bottom it’s usually a chemical dependency or a substance abuse problem,” he said. “I was just unhappy.”

After being transferred to Sigonella, Sicily, LeBlanc decided to make a change and began hitting the gym with a couple of work buddies. “They didn’t have an extensive knowledge of working out or anything like that. So we would go in there not really knowing what we were doing,” he said. “We were just pushing some weight around and it didn’t seem efficient to me.” Unsatisfied with the results he was seeing and frustrated with the amount of time it was taking to make progress, LeBlanc decided to change his approach to working out. “The most difficult thing about it was I remember thinking, ‘It should not have been this hard to make this change,’” he said. “That’s when I really started digging deep and getting into the physiology of everything — the biomechanics.” He threw himself into learning as much as possible and took on training gigs at Anytime Fitness in Buford and then Stage 3 Fitness in Suwanee when he returned stateside, but momentum was building for LeBlanc to open his own gym, and the seeds of Crux were planted.

The H.I.R.T. System
Crux specializes in group workouts utilizing the H.I.R.T. system: high intensity resistance training. “We structure our workouts and our entire program on breaking down muscle; and you can only do that through shorter, more vigorous resistance training,” LeBlanc said. The H.I.R.T. system focuses on targeted strength training for fat loss that breaks down muscle as quickly as possible so that the body can naturally restart the rebuilding process. “The faster it does that, the faster you can break the muscle down again, and the faster you repeat that cycle, the faster you will see results.”

During a 45-minute group workout class, LeBlanc or one of Crux’s team of trainers, including Casey Robuck, Madison Barnhardt, and Roshawn Pryor, leads the group through a series of strength training exercises for a set number of reps that last a set number of minutes without rest. A quick glance at Crux’s Facebook page reveals snippets of early morning classes — usually filled with kettlebell swings, burpees, weighted squats, overhead presses and any number of ab exercises. These short glimpses into the reality of making it H.I.R.T. could be enough to intimidate any gym newbie. But while the trainers strive to push clients out of their comfort zones, LeBlanc assures that Crux’s workouts are designed to accommodate all fitness levels, noting their clientele ranges in age from 14 to 70. “The knowledge of our trainers and the way that we structure the workouts can be easily modified for anybody,” he said. “Something that’s difficult for me may not be difficult for you or vice versa. So it’s a sliding scale that we can adjust for every single individual to make it tough no matter what. And we have an abundance of ways to do it.”

The “Crux Moment”
Crux Fitness is a dream realized for LeBlanc — a turning point of sorts, which harkens back to the gym’s name. As he described it, a “crux moment” is a pivotal moment or a turning point. “I can very vividly remember my turning point — my crux moment,” he said. “And my goal is for anybody who comes to the gym and really commits and trusts us to do what we do, that they’ll look back in six months, a year, two years and remember that their turning point was when they joined this gym.”

And Crux is well on its way to being just that for many people in the community. A recent class was filled with varying ages, both women and men. Even though everyone was independently struggling through the workouts, they were all there for a unified reason: to better themselves. The camaraderie was palatable, and the tough yet encouraging leadership from LeBlanc pushed everyone through the workout. And while your body may feel like quitting, it all comes back to the central theme of mind over matter. Or as LeBlanc puts it, embracing the suck. “I make sure that whatever they’re doing sucks as much as possible,” he said. “That’s where it gets fun for me.”

7 Tips to Help Your Home Beat the Summer Heat

Our Favorite Stories of 2018