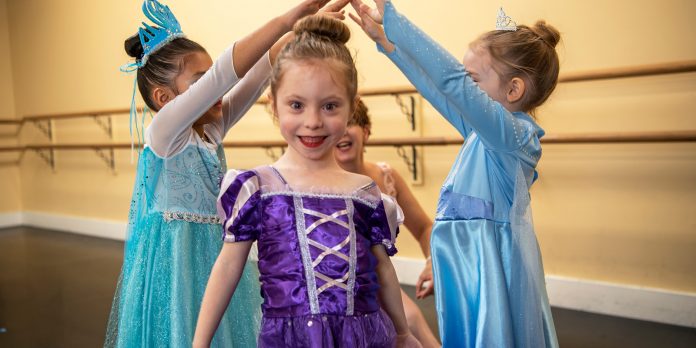 Suwanee Academy of the Arts is a cherished sanctuary for young artists to hone their craft and build confidence.

The foundation of Suwanee Academy of the Arts was built upon the 20-year friendship of Patty Etherton and Berneta Davis. When they met in church back in 1999, Patty, a realtor by trade, and Berneta, affectionately known as Miss Bernie by her students, instantly bonded over, of all things, a roll of duct tape.

At the time, Bernie was putting together a Christmas pageant for the church and Patty had taken over the children’s choir, who were set to perform before the show. During rehearsal, the children in the choir were dressed in costume as donkeys, sheep and the other animals of Bethlehem because they, too, would be performing in the pageant. The night before the show, however, Patty told Bernie that the choir should be dressed in choir robes.

The pair share a laugh reflecting on their initial meeting. “You don’t have to put that in the article,” Bernie jokes, but the story is a perfect reflection of their relationship. It showcases Patty’s problem-solving gusto married with Bernie’s dedication to the craft. When they’re together, their energy lights up the room. Their passion for the arts is contagious. After speaking with them, you leave wanting to twirl and recite dramatic monologues — anything to flex your creative muscle.

Discovering the Arts
Both Patty and Bernie were transformed by the power of the performing arts at a young age. Patty was a shy child who loved to sing. In seventh grade, she was encouraged by her friends and teacher to perform a solo in the state competition. Patty’s mom found a voice coach to help her prepare for the performance. “She set me up with a voice teacher who was actually just a piano teacher who played the song over and over again and taught me to sing to the trees in her front yard,” Patty says. “So I would make eye contact with all the trees in the yard and sing.”

When it came time to perform for the class, Patty remembers being incredibly nervous. It was a lot for a shy child to stand in front of the class and sing. “When it was my turn, I remember the panic I felt, but I started singing and I just imagined all the people in my class as trees,” she says. “When I finished singing there was this silence and then suddenly everybody started cheering because I had this voice that no one knew I had.” Within just a matter of weeks, Patty had gone from being a shy introvert into a proud extrovert, and she never looked back.

For Bernie, the studio has always been a sanctuary. “High school was terrible for me, but I knew I was going to go to the dance studio every day after school,” she says. “It is my sanctuary to this day. It is love and home; it’s where I like to come and want to spend my time.”

Building the Academy
Bernie and Patty continued to work together to produce shows for their church, and that quickly evolved into discussions about opening a studio of their own. At the time, Bernie was commuting to and from a studio in Buckhead, but it made sense to consider building a business in Suwanee.

“We started writing up a business plan on a napkin at the mall, and it was one of those wake up calls,” Patty says. “Why don’t I do what I love doing every day?”

“We would walk in the morning and sit by the pool and dream up what this school was going to look like and what it was going to feel like,” Bernie says, “and what we wanted and why.”

One thing they both agreed on was that it would not be a competition studio. “Art shouldn’t be about competition because it takes away the beauty of art and sharing art,” Patty says. “So we stayed firm with that decision in terms of creating the studio.”

In 2003, Patty and Bernie opened Suwanee Academy of the Arts (SAA), a comprehensive performing arts academy in downtown Suwanee. “We chose the word academy because we wanted to be known for quality, and we wanted to offer that technique where you can really get good at something but in a nurturing space,” Patty says. “There’s a difference in this school because we’re not all about our trophies or all about competition — we’re really about teaching and inspiring these kids.”

Since opening, Suwanee Academy of the Arts has blossomed into one of our community’s most cherished institutions. Combining Patty and Bernie’s talents, the school offers classes in dance, drama and music, which includes Kindermusik, solo lessons and group lessons.

On a busy Saturday morning, girls in pink tutus scatter about as a group of teenagers discuss the upcoming show. A young girl walks through the door with a guitar case and heads toward the back of the building for lessons. Moms peek through the open doors of the studios sneaking photos as the kids chassé in unison.

Posters hang on the walls announcing upcoming shows while Patty and Bernie can be seen checking on classes. The young ballerinas are especially excited to see Miss Bernie, who they hover around as she acknowledges each by name with an excited smile. Together, Patty and Bernie have no doubt succeeded in what they set out to create: a safe place for young artists to nurture their craft and build confidence.

“One of the things we love is when parents come up to us and say, ‘You know our kids just want to live here! I can’t get them to come home!” Patty says. “And we’re like that’s good! Wouldn’t you rather them be here than not know where they are? They’re safe here! When they’re here, they’re pretty darn busy. We keep them going, we keep them working!”

Summer Fun
This summer, SAA is once again hosting one of its most beloved camps: Princess Camp. Taking place June 1-5 and June 15-19, Princess Camp is the perfect opportunity for kids to live in a world of make believe and dance. Each day the young princesses, all dressed in costume, will have enchanted adventures with their Fairy Godmother. Campers will create works of art with fairies and go on an adventure with a different princess each day. Perfect for kids ages 3-7, Princess Camp is a chance for kids to live in their imagination with their friends and the SAA staff, who truly bring the whole experience to life. At the end of camp, there will be a grand Ball where the young princesses will perform for their parents.

SAA is also hosting a brand- new camp this summer called the Bodacious Broadway Burger. Held June 8-12 at Lanier High School, this camp invites kids age 6-12 to “be bold, brave and bodacious as they explore their hidden potential through singing, dancing, acting, games and some special sauce!” Campers will rotate between stations focused on singing, dancing, acting and more, with each day ending with time on stage. Patty and Bernie hope the camp will help pull kids out of their shell and give them each a chance to shine.

In the end, Suwanee Academy of the Arts has become a refuge for young artists. Here, they can be themselves — or discover themselves, whatever the case may be. Patty and Bernie should both be proud. They’ve truly built a foundation for the arts here in Suwanee. “Everyone has their talents and everybody brings their talents to the floor and gives the best that they have,” Bernie says. “That’s where the magic happens.”

Suwanee Academy of the Arts is located at 341 Main St. in Suwanee. For more information, call 678-482-6333 or visit SuwaneeAcademy.com.