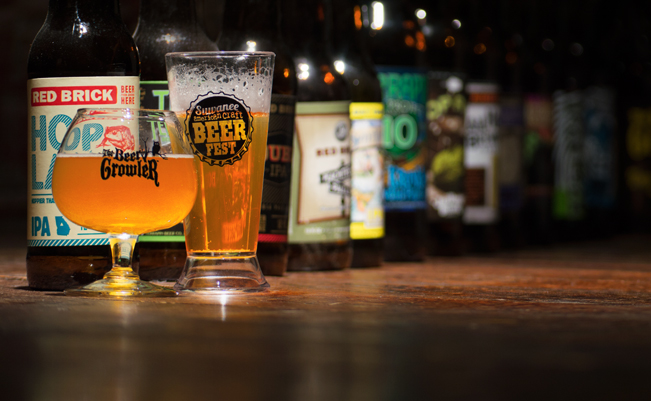 You might be asking yourself, what exactly is craft beer? In order for a beer/brewery to be considered “craft” it needs to meet three requirements. The first being it must be small and produce no more than 6 million barrels of beer annually. Second, it must be independent and have no more than a 25% ownership by an entity that is not the brewer. Basically, it needs to be owned by the people actually running the brewery and not some larger organization that has no personal stake in the brewery. Lastly, the brews must be traditional, meaning that 50% or more of their volume comes from all malt beer. Essentially, the beers need to be brewed with high quality ingredients.

Now we will bring you up to speed on the beginnings of American craft beer. The United States has been a prized location for brewers because we have no brewing traditions to adhere to, which allows for the introduction of unique flavors and typically more creative beers in general. In the late 19th century we had over 4000 breweries in our country! Unfortunately Prohibition marked the end to almost all of them. We are making our way back to those numbers with around 1900 breweries currently in operation as of 2011 and with many more opening each year. Most people can agree that craft beer as we know it got it’s start in 1965 when Fritz Maytag bought Anchor Brewing in San Francisco. California was conducive to the beginnings of craft beer because smaller companies were able to model themselves after the already existing winery infrastructure. One of the most notable American craft beers, the Sierra Nevada Pale Ale, had its beginnings in 1980. It comes in a green can, and if you have ventured in the craft beer world you will have undoubtedly come across it. This beer was an instant classic and really started to open people’s eyes to the world of Craft Beer. Since then the craft beer explosion has headed east and is now starting to become a prevalent force in the beer industry with an overall market share of 9.1% of total beer sales in dollars. This number has been increasing each year.

Georgia is starting to become a hot bed for breweries with over 20 breweries and brew pubs in operation with a handful more that will open in 2013. So do yourself a favor and next time you are about to purchase a beer, give something new a try and see what the buzz is all about! In the next issue, we will begin to dive into all of the different styles of beer so you can be a more educated consumer when you reach for a pint!