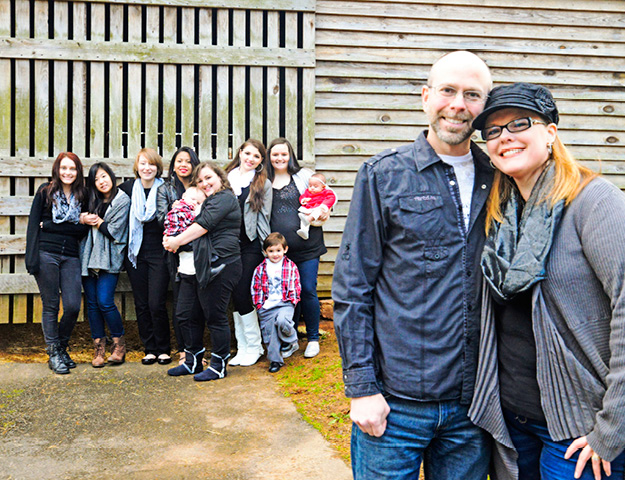 Four years ago, Suwanee residents Michael and Erin Lundmark planned to add to their family through adoption. The Lundmarks already had three wonderful children of their own, but Erin had a heart for children and was looking to adopt three teenage siblings who faced aging out of foster care. Michael felt that Erin had supported his dream of opening Jekyll Brewing, and now it was time to support her dream of adoption.

During the process of classes, paperwork, and health checks, however, the Lundmark family came face-to-face with the greatest trial of their lives. An adoption qualifying physical revealed Erin had stage four colon cancer.

The doctors gave Erin a bleak prognosis. She fought cancer for three years with such incredible strength, faith, grace, and positivity that it inspired everyone around her. Earlier this year, Erin was invited to be on a “Jesus Calling” podcast during which she shared, “A cheerful heart is good medicine. I want people to see God’s light shining through me. If someone says to me that they see God through me, there is nothing that excites my soul more.” Anyone who knew Erin well would say that she was a reflection of God’s love and light.

Erin lost her battle to cancer on August 15, 2018, leaving behind her beloved husband and three wonderful children she was so proud of, in addition to hundreds of close family and friends. Being the fighter that Erin was, she was determined not to depart this earth without leaving a mark for Jesus that would last beyond her life and into eternity for those who matter most to Jesus — the fatherless. In her final weeks, Erin made a request to her friend Jennifer Warawa to honor her own mission and take the journey full circle, giving the gift of family to youth aging out of foster care.

Erin’s legacy to provide the same belonging she hoped to give a teen without a family is kept alive through Connections Homes. Erin invited everyone who has loved her, been inspired by her story, or prayed with and for her to participate in this legacy, and in her final weeks, her friends and family helped to raise nearly $25,000. Warawa joined the Board of Directors for Connections Homes to work hands-on with their team to have an eternal impact, far beyond what Erin could have imagined.

According to its website, Connections Homes was founded on Jesus’ words from John 14:18, “I will not leave you alone (comfortless, orphaned), I will come to you.” Founder Pam Parish shares on the site, “As an organization, we believe that no one, especially a young person whose life circumstances are no fault of their own, should be alone in life. Our values as an organization move us continually forward in finding loving, lifelong family-like relationships for youth who are alone due to broken family systems.”

We recently spoke with Pam Parish to learn more about Connections Homes and its impact in the community:

Before starting Connections Homes in 2014, you and your husband first decided to adopt in 2007. How did that lead to adopting seven more daughters, six of them between the ages of 11 and 18?

PAM PARISH: That’s a really good question. We certainly started with the idea of only adopting one daughter. We had no intention of being more than a family of four. However, I got involved in our adoption agency, Bethany Christian Services, and began teaching the state curriculum for foster parents and helping with support groups. In the process, I started to hear of other stories. Our third daughter (second adopted) was 16 when she came into our family after her previous adoption had disrupted. I remember telling my husband that I knew of this 16-year-old who had been sent back into the foster system by her adoptive family and how sad it was for her because she might not ever have a family. He said, “Call our caseworker and tell her that we will take her.” That’s exactly what we did, and we met her two weeks later on our doorstep with all of her belongings in garbage bags.

The next four came after the age of 18 from various circumstances (before Connections Homes began) — international adoption disruption, homelessness, and aging out of foster care. Our eighth daughter came at age 24 through Connections Homes after we started.

Tell me a little bit about how and why you founded Connections Homes?

PP: When a problem literally knocks on your door four times in a row, it’s probably God trying to wake you up to something. In 2012 after our fourth daughter over 18 became a part of our family, our Pastors — Dennis and Colleen Rouse of Victory World Church in Norcross — asked us to pray about what God might be doing that was bigger than just our family. We did and the idea for Connections Homes was born.

When I began to dig into statistics, I discovered that over 500 youth were aging out of foster care in Georgia annually, 22,000 across the U.S., and that on average there are 3,400 homeless 18- to 24-year-olds in Atlanta on any given day. That’s when we knew that we had to do something. So, with Victory’s support, we began to build Connections Homes.

Initially, we started with the idea of building a home that would house girls 18-24 who were aging out of foster care or homeless for up to two years. However, when I formed our Board of Directors and we began to look at the landscape, we realized that at the heart of what we’ve done in our family was a “forever” commitment, it was family. It would be impossible to truly be a forever family-like person in 30-plus lives. So, we began to ask ourselves what it would look like to design a model that would invite others in the community to do what we had done in our family — become a permanent connection for a young person over the age of18 who has no one else. We ultimately created what was and is the first organization nationally to approach the problem of 18- to 24-year-olds who age out of foster care or are homeless without stability by putting a lifelong stable person in their lives.

How many young adults do you typically match up with mentors annually?

PP: We just crossed our four-year mark as an organization. In business terms, we’re just exiting our proof of concept stage. Over those four years, we’ve connected [82 as of today but by publication time this will be over 95] youth to Mentoring Families. Next year, we will match and maintain 100 new connections for youth and Mentoring Families.

How does Connections Homes help in preventing poverty and homelessness for young adults aging out of foster care?

PP: The youth we work with are between the ages of 18-24 years old and are at high risk for chronic poverty and homelessness. 97% of youth who age out of foster care end up in poverty or worse, mainly due to lack of education or a skilled trade which would enable them to earn a living wage. The lack of education and skilled trade is commonly linked back to their inability to navigate adult systems of school, work, etc., and the absence of supportive adults who can help them overcome their obstacles (having correct documents, motivation, awareness of opportunities, etc.). Additionally, 65% of girls who age out of foster care or experience homelessness find themselves pregnant within the first year.

Youth need to feel positive and hopeful about their future and believe in their ability to achieve success with hard work, resilience, and resourcefulness. We want them to develop a sense of self-worth, self-esteem, confidence, and resolve in order to move beyond their setbacks and challenges. A successful transition for any teenager into adulthood doesn’t happen without a solid set of positive role models and advisors. For most of us, those took the form of family or childhood community. For youth who’ve aged out of foster care or are homeless without family, they are left to their own thinking or peer-level “wisdom” which contributes to a continued cycle of poverty, homelessness, and hopelessness.

The development of a safe, supportive, and stable relationship to a Mentoring Family allows the youth to feel supported in their endeavors while also providing the needed accountability systems to keep the youth on track toward their goals. Having a consistent person checking in on them, opening up resources and opportunities, and partnering with them to overcome obstacles such as missing documents (driver’s licenses, birth certificates, etc.) helps the youth to remain motivated and begin to aspire to a better life for themselves. Change occurs over time as the youth develops the ability to trust that the relationship is sincere and begins to rely on their Mentoring Family for advice, assistance with critical decisionmaking, and guidance.

What is involved if a person or family is interested in becoming a mentor?

PP: Anyone interested can go to our website and submit an interest form. From there we have an online orientation that details the info about our program and what it means to be a Mentoring Family, then there’s an eight-hour classroom training, application process and we do state and national criminal records, child protective services, and sexual predator check on every family.

What are other ways to help support Connections Homes?

PP: We understand that not everyone is at a place right now that they can become a Mentoring Family, yet their hearts can still be moved to help this vulnerable and, truthfully, forgotten population. Many people get involved as volunteers or donors. In 2019 we will be opening the doors on a Career Connection Center in downtown Lawrenceville which will provide job interview clothing for youth 16-24 who are in foster care, have aged out of foster care, or are homeless. We will be looking for lots of community support and volunteers to help with career coaching, clothing sorting, staffing the center, skill-building classes, and much more. That information and how to get involved will be on their website in early 2019.