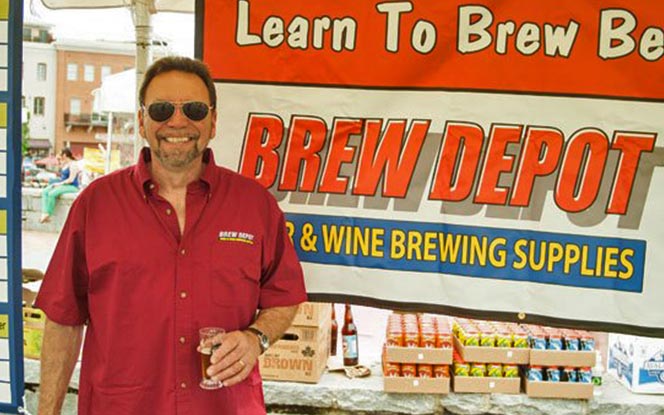 “You can sense a resurgence of energy around the craft beer movement in Georgia,” Bob Carlton started out our conversation making me thirsty to learn more. Carlton, owner of Brew Depot / Beer Necessities, the oldest and largest home brewing supply store in the Southeast, sat down with Suwanee Magazine to discuss the rapid growth of craft breweries and home brewing in the state of Georgia.

There are at least fourteen new breweries in Georgia working to open their doors in 2014, of which at least eight of whose owners and brew masters have brewed from Carlton’s store and taken Brew Depot’s classes.

Carlton opened his doors in 1996, back when Atlanta had only three breweries: Marthasville, Dogwood and Sweetwater. Since then, only Sweetwater has survived, but if you take a look back, Carlton will tell you, “We were breaking ground back then…I was breaking ground on the home brew side of business while they were breaking ground in the brewery business.” But, they were all working together for a greater good – the craft of craft beer making.

In the South, where giants like Nascar and Budweiser traditionally rule, it has taken some time for craft brewing to rear its beautiful head. In 2004, Georgia raised their ABV limit on beer from 6% to 14%, and the art of craft brewing then also started to rise. “It broadened everyone’s horizons and allowed breweries to make more elegant and more complex beers where they couldn’t before,” Carlton explained.

One of the issues that popular breweries run into now is that they get locked into a signature beer, “it almost becomes industrial, with little room for experimentation,” Carlton explained. Which is where Brew Depot comes in, “brewers still love the craft part of craft beer…” and by home brewing they are able to continue to experiment with recipes and flavors and preserve that craft.

“I would say that 99% of professional brewers were home-brewers first. Its not like they went to school and got a degree in brewing…they found a passion, developed that passion and shared it with their friends who then encouraged them to share it with others,” Carlton stated. A few well-known local breweries that started from Brew Depot are: Jekyll Brewery, Three Taverns, Blue Tarp and Monday Night Brewery. “The guys from Jekyll and Monday Night still come in here a lot and brew small pilot batches…they love to experiment and develop their craft,” Carlton confided. Carlton, along with many other home brewers, found a love for beer upon first drinking fresh, local craft beer and then becoming interested in the brewing process.

New brewers are welcome at Carlton’s store where both beginner and advanced level classes are available. Classes are a full day comprehensive course, lasting eight hours. The beginner’s class will take you through all the basics, equipment needed, ingredients and a hands-on portion of brewing. The advanced classes are more focused on recipe formulation; brew house calculation and all-grain brewing equipment.

With over 15,000 customers registered in Brew Depot’s customer database, we believe that they’ve played a large part in helping form the increasingly popular craft beer scene in Metro Atlanta. And from those thousands of registered home-brewers, Georgia is bound to see a lot more breweries pop up in the near future, from individuals who are taking their passion beyond hobby.

It is up to those who are passionate about craft beer to help Georgia become the beer destination it is destined to be. Although we have come a long way, there are still laws and regulations that prohibit breweries from self-distributing and from selling more than a 5.5oz sample on premise. Georgia is one of only 8 or 9 states that won’t let breweries self-distribute. But, we don’t see a slow down of new breweries opening up, “there seems to be a desire to make Atlanta the new Southern brewing destination,” Carlton said, and with that comes more pressure to change the laws so that local breweries will thrive.

For more information or to register for classes, visit: www.brewvan.com