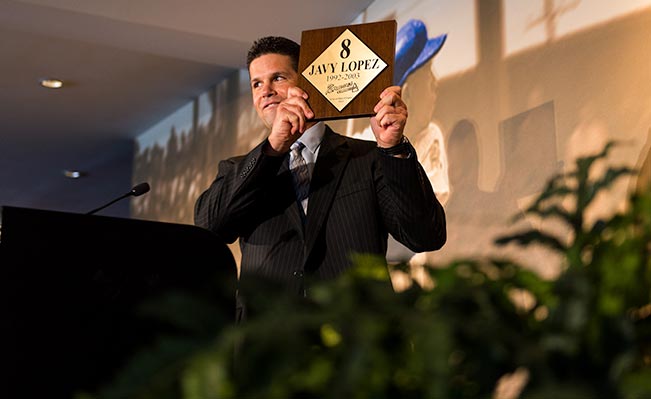 Braves catcher, Javy Lopez was inducted into the Braves Hall of Fame last month. We met up with with him at his Suwanee home to talk about his career in baseball, what he’s up to now and why he loves living in Suwanee…
BY: Rachel Fasig
Photos: Steve Glass Photography
Award Ceremony Photo: Pouya Dianat, Atlanta Braves Photographer

Moving to Suwanee seven years ago was a no-brainer for retired MLB All-Star Catcher and Atlanta Braves Hall-of-Famer, Javy Lopez. “I love Suwanee. It’s the best place in the Atlanta area to raise a family! Great schools, parks, fun events like Woofstock, low crime rates…just a great place for kids,” said Lopez. And a great school system was key for Lopez, a father of four. He currently lives in Suwanee with his wife, Gina, and sons: Javier, 18; Kelvin, 14; Brody, 3; and Gavin,10 months.

Lopez, who played with the Atlanta Braves for over a decade, was inducted into the Braves Hall of Fame on May 23, 2014. After seven years of retirement, and a new surge of media attention, he has had the chance to reflect upon and evaluate his professional career. “Playing for the Braves was a great experience. It’s a great honor knowing that I’ll be there forever,” he said. We had a unique opportunity to catch up with him at home and discuss the ups & downs of his remarkable story.

His story began in Ponce, Puerto Rico when a young Lopez played baseball just for fun. “I actually wanted to be an archeologist…I was fascinated by the idea of traveling the world and digging up fossils. But, at age 15, his ball game started gaining attention from Major League scouts, “They approached my dad and asked him questions about my future in baseball…at that point we had never considered it as a professional career. “ But, everything was about to change. After the scouts approached Lopez’ father, he began to look at his game in a different light: as hope for a bright future.

Lopez continued to improve his game and by age 17 he had several offers, including one for the Braves. “I had no doubt that I should play for the Braves – they were the only team we could watch at home because we didn’t have cable, but the Braves games aired on TBS,” he explained. The Braves did not offer him the most money, but being a family man at heart, the ability for them to watch him play from home was the ultimate selling point for Lopez – and in 1987 he signed as an amateur free agent. The Braves sent him off to training camp. Talk about a culture shock – in all aspects of the phrase. “I did not realize how much competition there would be,” Lopez said about the minor leagues, “ I called my Dad and said, ‘I didn’t know there would be 400 other players in spring training!’” And, at that point his father instilled wisdom on him that he shares with rising players today, telling Lopez, “Don’t worry about them. Only worry about what you are doing and do whatever it takes. Focus on yourself.”

Lopez is invited every year to the Braves training camp, which is where he mentors young players and tells them, “It’s not an easy job. Baseball is fun, but it requires a ton of work. There’s a lot of competition out there and in order to be selected you have to do things just a little bit differently than everyone else.” Two years ago, Lopez met current Braves catcher and left fielder, Evan Gattis, and an anxiety-ridden Gattis confided in Lopez about his depression and fears. “He confided in me before he opened up to the media about his (now-famed) story,” said Lopez. And, Lopez believed in Gattis and still does. “I try to help the younger generation the best way I can…if they’re willing to listen to me,” he said.

Rising baseball stars look up to Lopez as a role model because he too has conquered many obstacles to succeed in the sport. Lopez currently holds the record for most homeruns hit by a catcher in a single season, with 42 homeruns in 2003 with the Braves. He found the record-breaking ball in his memorabilia cabinet to show us. “This was such an awesome feeling,” he said, proudly holding out the ball, “I was up there with these great guys – on the list of records.” But his journey wasn’t always as easy or natural as he made it look. “When I first moved here, I didn’t know any English at all…not a word,” Lopez said in perfect yet accented English. “I had to go to English classes every single night and I decided to live with American roommates…which is where I really learned the most.” Lopez said learning English was extremely important to him because he had to be able to effectively communicate with the pitchers and other players, as well as know how to express himself in front of the cameras.

Lopez credits much of his success to not only hard work and dedication, but to a phenomenal team with the Braves. “Maddux was my favorite pitcher to catch for! As a catcher you want the game to go fast because the longer the game, the more you have to squat and sweat. With Maddux, we’re out there three hours…easy and done!” Lopez said, referring to Baseball Hall of Fame pitcher, Greg Maddux. Meanwhile, he laments catching for rookie pitchers in Baltimore for a brief stint in 2004, “Those games were five hours long…brutal.”

Lopez’ oldest son, Javier (18), is hoping to play his way up to the Major Leagues someday as well and will be heading to college soon. Both Kelvin (14) and Javier keep Lopez busy with their travel teams. During the week, you might find the Lopez family at a game anywhere between Canton and Cartersville.

But when they have down-time, the family loves hanging out in their Suwanee neighborhood: golfing, fishing, swimming, playing cornhole with the neighbors, taking the dog to the park, and eating at some of their favorite restaurants: Cinco, Mellow Mushroom, Ippolito’s and Twisted Taco. When asked if they go to many Braves games together, he says, of course, but he is really excited for the new stadium being built in Cobb County. “I think the new stadium is going to be awesome for the fans! Right now, there really isn’t any place for fans to go right after the game. This new stadium will have direct MARTA access, restaurants and bars right around the stadium, and closer parking,” he said.

As a previous member of Leadership Gwinnett, Lopez is personally invested in community improvement and ways to make Gwinnett and Suwanee an even better place to live and work. After a day of riding with the Gwinnett County Police Department as part of the program he said, “I got a feel for what they do everyday and I really admire them.” Lopez is proud to consider Suwanee home and loves being involved in the community. Although retired, this is hardly the last that you’ll hear of Javy Lopez. ■