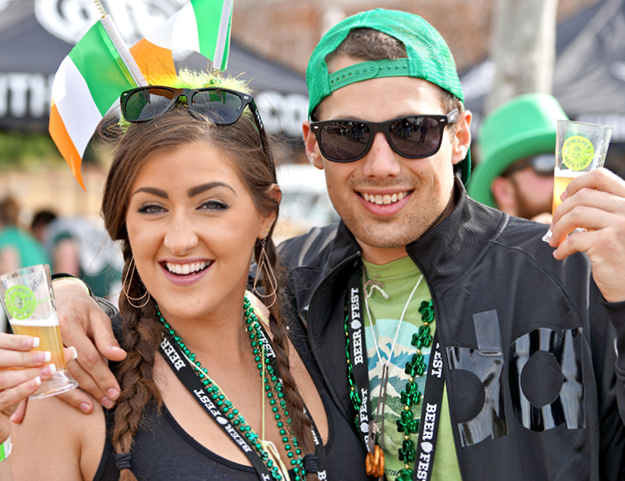 The Suwanee American Craft Beer Fest returns for its eighth year on Saturday, March 17, 2018, from 1-5 p.m. in beautiful Town Center Park in Suwanee, And this year there’s even more reason to celebrate: While Suwanee Beer Fest has always taken place around St. Patrick’s Day, 2018 marks the first year the beloved beer festival will take place on the actual holiday! And even though craft beer is the name of the game, attendees are encouraged to come decked out in all things green, shamrocks, Irish garb and any other St. Paddy’s gear.

Recognized as one of the biggest and best craft beer festivals in the Southeast, Suwanee Beer Fest features unlimited samples of more than 350 craft beers — more than enough to sate the appetite of thirsty hopheads. The beer selection will have something for everyone and ranges from hard-to-find seasonals to perennial favorites, as well as local brews mingling with national breweries. And in keeping with the spirit of St. Patrick’s Day, the event will feature a performance by the Drake School of Irish Dance and the sweet sounds of bagpipes.

Mark your calendars because tickets go on sale January 12th at suwaneebeerfest.com. General Admission tickets are $50 and include: unlimited samples of craft beer, backyard games such as cornhole and giant jenga, wine samples, and food for purchase from local restaurants and food trucks. There will also be a 2018 Home Brew Competition hosted by Brew Depot. The VIP Experience is $110 and includes early entry to the fest (beginning at noon), rare and exclusive beers, access to a private dining and tasting area, food catered by Marlow’s Tavern and more. In addition to the St. Patrick’s festivities, games, tasty brews and food, there will also be live music by Atlanta’s favorite party band, The Geeks, and Joe Hall (back by popular demand from Suwanee Wine Fest).

While there is much merriment to be had at Suwanee Beer Fest, it’s also a time to give back to the community. Proceeds from the event will support Cooper’s Crew, a Suwanee-based organization created in honor of Cooper O’Brien, who lost his battle to a rare form of cancer at the young age of 14. Cooper’s Crew provides funding for research and development to find a cure for childhood cancer as well as scholarships for young men and women facing challenging circumstances. So while you’re sipping samples of your new favorite craft brew or participating in a hopped-up version of an Irish jig, remember that a portion of the proceeds will benefit a great local cause. Cheers!