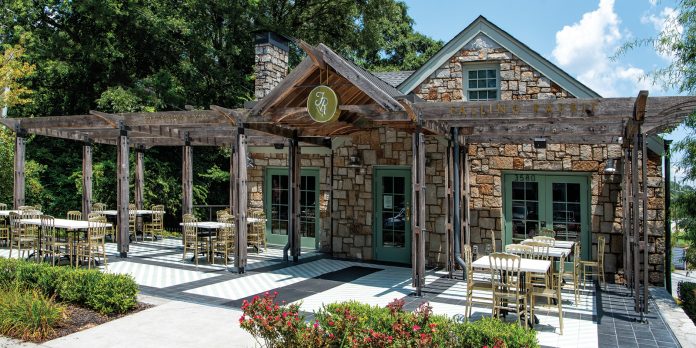 Chuck and Barbara Woods bring an elevated yet approachable dining experience to downtown Duluth with their new restaurant, Falling Rabbit.

It’s been said that eating is an act that encompasses all your senses. Nowhere is that more true locally than downtown Duluth’s newest restaurant, Falling Rabbit. Located in the Parsons Alley entertainment district, Falling Rabbit is the culmination of owners Chuck and Barbara Woods’ years of hard work and mutual love for food and drink. Chuck is an accomplished chef who has spent more than a decade in the hospitality industry, working his way from cook to sous chef in high-end Chicago restaurants like Girl and the Goat, Trench, and Tied House. He’s worked alongside noted chefs who hold James Beard awards and Michelin stars, who he says pushed him to grow as a young chef. “It was a really good experience to work in such a competitive environment,” Chuck says. “It was a nice school of hard knocks for a little while.”

Chuck met Barbara, who goes by Babs, during their time together at Trench. Babs is a hospitality veteran in her own right, having spent years working for different restaurant groups as the go-to person to help new restaurants get up and running. She describes her experience as “all over the spectrum,” but she really cut her teeth on the beverage side of things, running the gamut of dive bars to high-end establishments. She even worked with superstar bartender Jim Meehan to open Prairie School, a former cocktail bar in downtown Chicago. As Babs puts it, she went from “late night, fast-paced, vodka sodas for days” to super-refined, complex cocktails, some of which clocked in at up to 10 minutes to create.

During a trip to Georgia to visit Chuck’s family in late 2018, the pair found themselves driving by a historic masonry building for sale in downtown Duluth. As if by chance, they had stumbled upon the perfect location for a restaurant of their own that, until then, had only been a distant pipe dream. From there, things moved quickly. By April 2019, Chuck and Babs relocated to Georgia. They purchased the building that summer and made moves to open their restaurant here in the suburbs of Atlanta. Even with build-out delays and COVID-19 rearing its head, Falling Rabbit officially opened its doors in November 2020, much to the delight of locals, many of whom quickly became regulars.

Sense of Sound
The name Falling Rabbit is an homage to Chuck’s mother and a particular poem she would recite when he was a kid. “I had one once but the wheels fell off so I said to the King, ‘George, hold the umbrella, I’ll walk in the rain for a while.’ But it was rabbit season and they were falling out of the trees. I had one once.”

“She had heard it somewhere growing up,” Chuck says. “It was just this weird thing she would say to herself and soon all the kids were saying it.” The name Falling Rabbit is a nod to those droll poems and sayings his mother would recite, which also act as a mantra that Chuck lives by today. “It’s a reminder to not take life so seriously all the time,” he says. “To just relax a little.” And that’s exactly what Falling Rabbit embodies — it’s a restaurant that doesn’t take itself too seriously while simultaneously creating seriously tasty and sophisticated food. 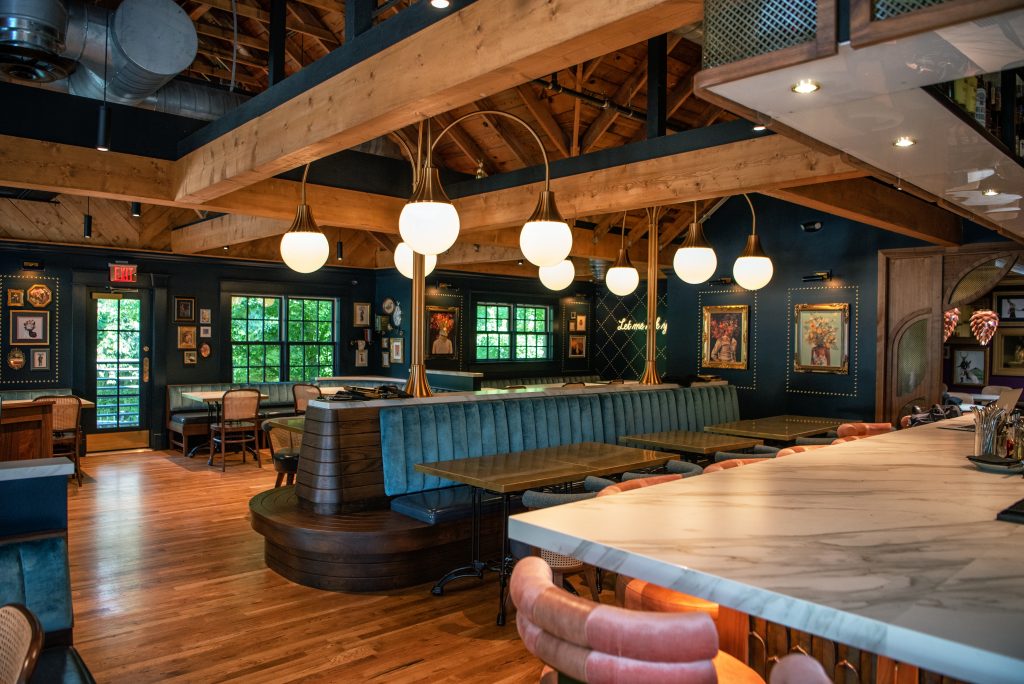 Sense of Sight
Walking into Falling Rabbit is like stepping into the pages of a fairy tale. The dark navy walls are accented with a curated collection of artwork and embellishments that gives patrons an introduction to the restaurant’s whimsical tone. Salvador Dalí’s melting clocks drip near a small lineup of food-and-drink-related books like The Drunken Botanist and Anthony Bourdain’s The Nasty Bits. Quotes from iconic writers pop up unexpectedly, with Oscar Wilde nestled next to nature-themed artwork housed in small gilded frames. The back hallway floor is adorned with black-and- white tiles reminiscent of an M.C. Escher lithograph. The geometric design is accentuated by the adjacent mirrored wall with golden hands poking through holding light bulbs to light your path. The playful design is part Beetlejuice, part Alice in Wonderland, with flourishes that seem to pull you through the pages of the story the restaurant will soon tell with its menu.

It’s almost as though you’ve chased Alice through the forest, only to follow her down the rabbit hole and land in the dining room of Chuck and Bab’s own version of Wonderland. The decor is a nice setup for the food to come — elegant and modern with a hint of whimsy to pull it all together. Illuminated letters across the back wall spell out, “Let me lick your plate.” It’s a challenge diners will happily accept.

Sense of Taste
The food at Falling Rabbit is as thoughtful as the atmosphere that Chuck and Babs have created. Composed of an ever-changing rotation of seasonally driven ingredients, the menu introduces a new dish each week so there’s always something new to try. “There’s a lot of French technique, but I like to incorporate ingredients from all over,” he says. “I use a lot of Japanese ingredients, but there’s influence from everywhere. We make all the pastas in house, do all the butchery in house — all the stuff.”

Chuck says he’s lucky to have assembled a crew that he trusts to execute his creative vision, including sous chefs Jonathan Marquez and Warren Jones. “I’ve got a really great crew of guys. We’ve spent a lot of time trying to hammer down how to make all this food come out of that tiny kitchen in an appropriate amount of time, so it’s been great seeing everybody transform or fall into roles that they’re really good at and grow,” Chuck says. “We’re all a tight group of guys and I really try to push them creatively to come at food in a different way. I feel really lucky.”

The synergy of the team has resulted in a collection of dishes that are not only beautiful to look at, but that taste even better. Chuck’s affinity for Japanese ingredients is found in the standout hamachi crudo. A delicate portion of hamachi is served alongside pickled plums atop hibiscus leaves dotted with kimchi mayo. Meant to be eaten as a wrap, the dish is light and refreshing and topped with tiny edible flowers. It’s a work of art on the plate; one that you almost feel guilty to mess up — until you take that first bite.

The charred rabbit arrives nestled in a bowl with wild mushroom conserva and sunflower crema. It’s hearty and earthy in the best way. The modest portion is deceiving; it’s surprisingly filling without being heavy, and the accompanying summer salad energizes the plate. It’s a nice follow-up to the bright opening act of the hamachi.

The berry tart is a satisfying end to the meal with four circular portions of different flavors that, while tasty on their own, create a delightful punch to your taste buds when combined together. The berry tart is smooth and velvety, served with mixed berry custard, candied jam, white chocolate, and a kumquat foam that nearly steals the show.

This is only a sampling of the menu, of course, which also includes a watermelon salad with pecorino crema, chorizo, and a pistachio crumble. A favorite appears to be the Wagyu brisket served on challah with sunchokes, shallots, and a barbecue drizzle. Of course, you can’t go wrong with one of the hand-crafted cocktails, each made with fresh ingredients and as much thought and care as the food coming out of the kitchen.

Come as you are
Falling Rabbit is a welcome addition to the burgeoning restaurant scene of Gwinnett, which over the years has slowly begun to shy away from the ubiquitous chain restaurants that dominate the suburban landscape in favor of chef-driven establishments that challenge locals to step out of their comfort zone. These restaurants prioritize quality ingredients presented in smart and creative ways, making a dinner out with friends or loved ones a true experience — as it should be. And while the food is elevated, Falling Rabbit maintains a true neighborhood restaurant feel with a “come as you are” attitude that welcomes all. There’s no dress code here. The Date Night Special on Thursdays is an attractive introduction to the menu, and includes a three-course meal and a bottle of wine for two people for $120, a true bargain for the quality of food and service you’ll receive.

Just like Alice, those who stumble down the rabbit hole will come out better on the other side having been treated to Falling Rabbit’s fresh take on contemporary American cuisine. Chuck and Babs have crafted an exciting new experience for local diners who are hungry for something different, and we’d be remiss not to partake.

The Tale of a Thoroughly Good Beer