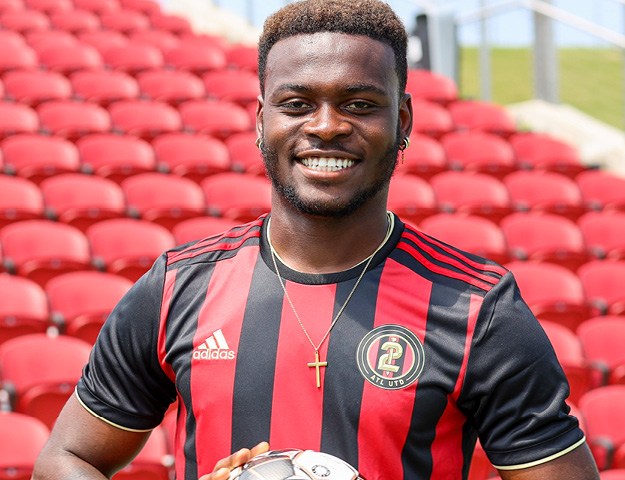 From losing his father at a young age in Nigeria to moving to Jamaica and eventually arriving in Suwanee after the Morton family adopted him and his brother, Okonkwo has now found his home with the Atlanta United franchise.

Known as one of five “homegrown players,” Okonkwo graduated from the team’s youth academy before receiving a professional contract with the league. After spending a year on loan with the Charleston Battery, the club announced in April that Okonkwo would be loaned out to its own USL Championship affiliate, ATL UTD 2, meaning he would not be going far from home this season.

We had the chance to meet up with Okonkwo at the club’s training facility to learn more about his journey to becoming a pro-athlete.

Out of all the sports, why soccer?
That’s easy. When I was back in Nigeria I played soccer every day. I’d get in trouble and beaten up over a game of soccer, which is something that normally happens in Africa when you love a sport and just want to play every day. When my dad passed away, I saw soccer as something to hold on to and motivate me to keep going. My dad really is the reason I played soccer so much as a kid and I didn’t want to stop doing it after he was gone.

How long have you been playing?
Although I have been playing my whole life, my professional career really just started. I’m still trying to continue to work hard and learn as much as I can from this incredible team.

What position are you playing this season?
This season I am mainly playing center forward. I love working with my teammates in order to score goals, and as long as I can help my team win I am happy.

How did you get involved in the Atlanta United youth soccer program?
It really all started back when Georgia United was here and I had great moments training and learning with them. I then got the call that the Atlanta United franchise was coming and was immediately excited to be a part of that. Being a homegrown player is awesome because I came up through the club’s Academy system and it’s great that they support local players.

Describe the moment you found out you got a pro contract and what this opportunity has meant to you?
It’s crazy to think of how far I’ve come and where I am now. Before all this started, working hard to be the best player I could be had always been my number one priority. I never expected to get a contract at such a young age, but when I got that phone call from Tony Annan asking if I wanted to play for Atlanta United, it really was a dream come true. Even when I got a preseason call-up it was amazing and I realized then that I was going to be among and have the opportunity to continue learning alongside these amazing guys and players. When I got that call my heart dropped and I immediately called my entire family. I was with my family when I signed the papers and that was a moment I will never forget.

Who has been your biggest supporter and role model throughout your soccer career?
You know what, aside from Tony Annan and Dave Smith, I would have to say my mother, Sue Morton. Whenever there’s a situation outside of or involving soccer she’s the first person I call. My mom really is my best friend and she gives me this sense of pride and encouragement to keep moving forward even when things seem tough.

What’s it like getting to witness and now play for an organization who won the MLS Cup?
I was blessed to be in an environment like that. When I was in Jamaica, I had played in a championship, but never won it. It was a blessing getting to be there with those guys who trained and worked so hard all season, and to see that the work they put in paid off made me want to work even harder. Being there to witness it and help celebrate with them is another one of those moments I’ll never forget.

What kind of message or advice do you have for young soccer players looking to be in your shoes one day?
Don’t fall out of love for it. If you love something be willing to give your heart to it and know the reason why you started in the first place. If you love something you need to keep putting effort into it and keep moving forward. When my dad passed away that was also a strive for me to keep going. Life is short and you don’t know how long you’ll be here for so keep moving forward and make the most out of it.

Visit our Facebook page for a video of our interview with Patrick Okonkwo at Facebook.com/SuwaneeMagazine.