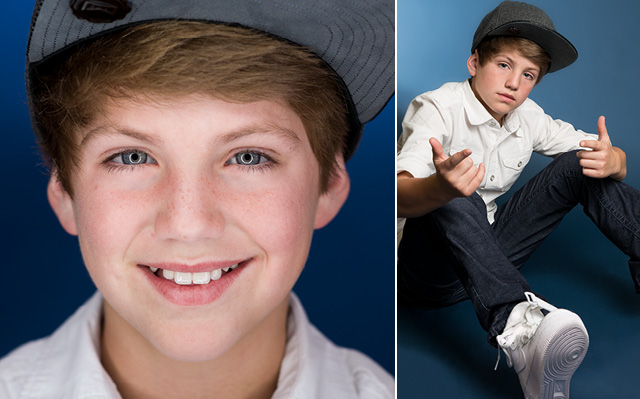 Over 7.7 millions followers are!

What do Miley Cyrus, Justin Bieber, One Direction and Suwanee Resident, Matthew Morris aka MattyB have in common? Answer – they have each earned a spot on Billboard’s 2013 Top 21 under 21 List. So, how exactly does an 11-year-old rapper from Suwanee, Georgia garner the attention of Billboard Magazine, Entertainment Tonight, NBC’s Today Show, Dr. Phil and Extra?

Well, I had the chance to catch up with MattyB right before recording his next music video to find out….

As I pulled up to the Morris home, I noticed they resembled a typical Suwanee family with five kids: toys were strewn around the backyard, teens were grabbing snacks out of the fridge, his little sister was having a “play date” with a friend in her room, and Mom & Dad, Blake and Tawny Morris, were keeping it all together.

“Matt, did you clean the dirt under your nails for the photo shoot?” his mom asked as I saw the 4’ 6”, 11-year- old boy come running down the stairs wearing his signature “MattyB” hat and white Nike Air Jordans. “Sorry,” she turned to me, “he was just playing outside before you got here”. I introduced myself, shook MattyB’s hand, and noticed, yes, his nails were clean.

“Hey, MattyB, nice to meet you! What were you doing outside?”, I asked. “I was skateboarding,” he replied. But, when MattyB isn’t in school, hanging out with friends, skateboarding, playing baseball or airsoft, he is rapping and creating songs and videos that have generated nearly 1 billion views on YouTube and a combined 7.7 million followers on social media!

MattyB attributes much of his success to two things: his cousin/producer, Marshall Manning and YouTube.

MattyB’s cousin, Marshall Manning aka Mars, is a rapper himself and made it to “Hollywood Week” of American Idol in 2010. When Mars mother passed away, he moved in with his Aunt and Uncle (Blake and Tawny Morris). At that point, MattyB was six years old and just started getting into music and dance. He loved having his older cousin around the house and considers him a role model.

MattyB said, “I kept following Mars around and watching him rap…I begged him to help me make a YouTube video and he said, “If we’re gonna do this we’re gonna do it right.” That is when they made the Justin Bieber cover of ‘Eenie Meenie’ which generated nearly a million views in one week. MattyB’s father, Blake Morris told Mars, “I think we have something here – this is not normal!” At that point, Mars decided to lay down his dreams in order to help his young cousin, and the family knew they were in for a wild ride!

Morris said, “YouTube has provided a platform for Matt to allow fans to discover his music as he discovers it at an organic level, so they are a part of his ongoing success. It allows him to mobilize them to come to his concerts, to share his concerts and to give fans an in-depth look into his life.” MattyB wants to be reachable to his fans and he wants them to be able to relate to him on a personal level.

While many artists are trying to fit the pop-star mold, MattyB is just trying to be himself. He works with Mars to recreate popular hip-hop singles with G-rated lyrics, as well as co-write original pieces. Although MattyB’s first video was a Justin Bieber cover (produced when he was just seven years old), he does not like being called a “Mini-Bieber” as many have called him in the past. “I like Eminem,” he said, “but only the clean versions of his songs.” MattyB said, “when I first started I wasn’t even allowed to listen to rap music and didn’t really know who I liked…I liked my cousin Mars!”

It is inevitable that MattyB will continue to grow and succeed as an entertainer. But, when asked if the family would relocate, I heard a resounding, “No!” They have moved around the Metro Atlanta area a few times, but have grown very fond of Suwanee over the past couple of years. “I love Suwanee!’ MattyB said. “I was shooting music videos in the (Town Center) park before we even lived here!” Actually, Blake Morris confided, that part of the reason they moved to Suwanee from a neighboring city was to be closer to the park and in such a family-friendly area.

And, MattyB loves performing around Atlanta. Back by popular demand, he is kicking off his “MattyBLive Summer 2014” concert tour with a hometown show in the Sidney Marcus Auditorium at the Georgia World Congress Center on Saturday, June 14th. For the remainder of the summer he will be performing headline shows across the US, in major cities, in California, Washington D.C., New Jersey, North Carolina and Illinois. When MattyB first went on tour he sold out two back-to-back headline shows at New York City’s Gramercy Theatre and other noteworthy locations. He’s excited to get back out on the road and see his fans, who are affectionately dubbed “Bgirls and Bboys”. “My fans are the best!” MattyB said, “they really support me and if there are any haters they back me up…plus they get crazy at all the concerts, which is fun! I even autographed a shoe one time!”

Recently, MattyB did a concert in St. Petersburg, Florida and he described the chaotic fan scene as “awesome”. He said, “people were crying and shaking and this was 2.5 hours after I finished my show and the “meet & greet” session…they were waiting outside for me!”

MattyB may have many adoring fans, but his classmates at school aren’t necessarily like other Bboys and Bgirls. While they definitely support their peer, they treat him the same as everyone else, “I’ve grown up with them since kindergarten…we mess with each other and they still punch me and stuff (jokingly of course!), he said. Already receiving marriage proposals from crazed Bgirls, MattyB is bound to be a heartbreaker! But, at 11 years old, he cares more about hanging out with family and friends and going to the skate park than he does about female attention! Mars often “encourages him” to get work done with promised trips to the skate park. In fact, as we were shooting our cover photo, I told him that we would take a couple photos in the backyard and he could bring his skateboard. His eyes lit up and he was very excited to show us his tricks.

“Dad, you missed it! Did you see it? I just ollied on my skateboard!” MattyB excitedly announced.

A lot of young stars have lost a sense of their moral compass and the Morris family is fighting to protect MattyB from that. Blake said that they are trying to maintain a sense of normalcy by keeping him in school and organized sports as long as possible. “He still has to try out for the school talent show just like everybody else…and he might not even make it into the show,” Blake explained. “For us, it is important to not release the authority (to the entertainment industry) that we have been given as parents. It is our job to teach him and instill values in him while he’s in the maturing process and if we can hold onto that, then things will turn out great.”