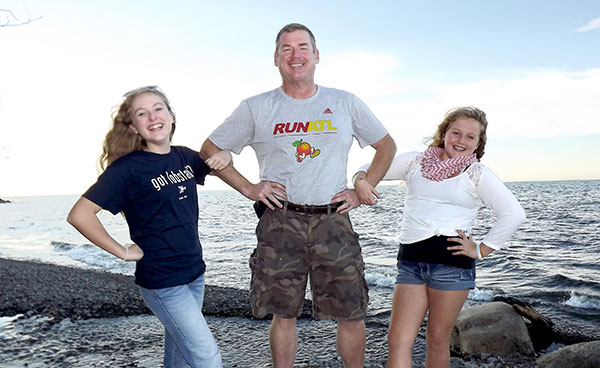 I was planning to meet Big Peach runner, Michael Timms, before one of the weekly Thursday night Big Peach group runs at Suwanee Town Center Park. The runs begin at 6:30pm, so I figured I’d meet with Michael around 5:45pm. “Don’t worry, I’ll be there right around 5:00pm – I’m always early, I come straight from work,” he said. I knew at that moment that I was dealing with a man who demonstrated drive, consistency and dedication.

As I walked into Big Peach Running, I immediately spotted him – he looked like a runner: fit and strong. But, as we started talking, I realized that it wasn’t until very recently that Timms started seeing himself in the same light: as an athlete, a runner, as a fit and strong individual.

“At age 38 I was diagnosed with Type 2 diabetes, and, unfortunately didn’t take the disease seriously….by my 44th birthday I weighed 280 pounds and was on several medications including high blood pressure medication and 90 units of insulin a day,” he confessed, “I knew I had to do something if I wanted to live a long life and one day walk my daughters down the aisle and spoil my future grandchildren.”

Completely amazed that the man sitting in front of me was once in such poor health, I was curious how he’d come so far. Two years ago, in January 2012, Timms made a New Year’s resolution to walk at least three times a week. He said, “when I started I just walked for 15 minutes, three times a week…and slowly at that. But, I developed a habit and started setting small obtainable goals, turning my walks into jogs.” He said that it’s important to reward yourself immensely when you reach your goals, with something like a nice new pair of running shoes.

But, how does someone go from a completely sedentary lifestyle to running half marathons? “Slowly, but surely,” he said. “Don’t ever judge a run by the first mile. A runner’s high is real and you’ll get there! Just remember, a bad run is better than sitting on the couch doing nothing!”

But, another big motivator for him was to get involved in fitness groups. “I waited way too long to start running groups, it makes running so much more motivating and the group holds you accountable. You can’t let the fact that you may not run as fast as most of these people keep you from getting involved, “ Timms said.

The fact that his family also jumped on board helped make his new healthy lifestyle a habit. “It’s a huge motivator when your family gets involved…our routine over the summer was to get up and run together on Mondays, Wednesdays and Fridays… we sign up for family 5k runs and running has become part of our lifestyle.”

You are probably wondering where he’s at now! He has come a very long way over the past two years. He has lost 70 pounds, run three 5k’s, one 10k and a half marathon – all while shaving his time off each race. But, it wasn’t until after his first half marathon, November 9, 2013, when he finally started considering himself an athlete! He realizes that he should have recognized it in himself much earlier.

And the diabetes? Well, “it isn’t a curse, it’s just a challenge. There isn’t actually a cure, but you can reverse the effects of it” he said.

He is entirely off insulin now!

His goal is to be completely off oral medication as well, and he’s almost there. Timms hopes that he can continue to be more involved in running groups as well as raise awareness in the diabetic community that there are ways to reverse the effects of it.

If you are a beginning runner, Timms encourages you to check out the Big Peach Running store group runs every Tuesday and Thursday night at Suwanee Town Center Park at 6:30pm. He says if he can do it, then anyone can.