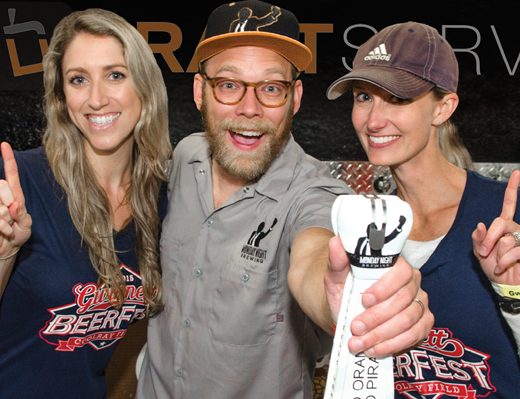 Monday Night Brewing faced 10 other local breweries in the “Flavors of Fall” Brew Battle at the inaugural Gwinnett Beer Fest at Coolray Field on September 26th. With strong contenders such as Sweetwater Brewing’s popular Hash Brown Ale and other delicious, seasonal beers, such as Cherry Street Brewing’s Pumpkin Pie Porter and Eventide’s Red Headed Haley, the competition was stiff. But, Monday Night Brewing won by a landslide in this competition powered by DRAFTSERV Technologies. The live leaderboard tracking showed Monday Night’s blood orange-infused Blind Pirate IPA at the top of the list throughout the entire day. In fact, they were the only brewery to blow through a keg and open a second. Event organizers presented Monday Night Brewing with the trophy at Taco Mac Mall of Georgia where customers were able to enjoy the just-released-to-the-public winning brew! If you stop by Monday Night Brewing’s tap room and brewery in Atlanta, be sure to look for the “Flavors of Fall” golden cup, proudly displayed in their trophy case.