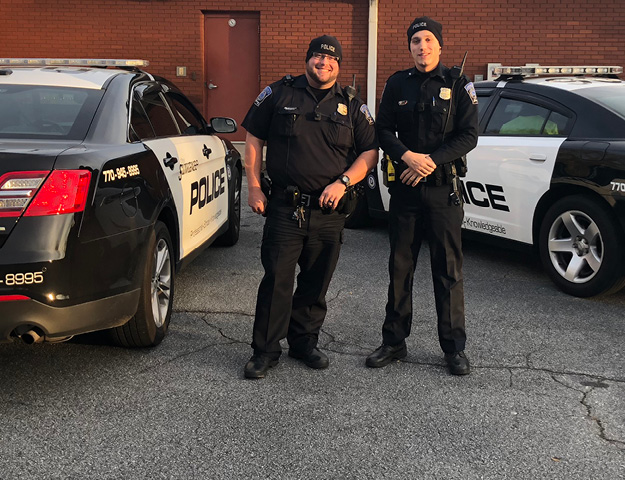 It’s not out of the ordinary for people to smile, wave, and thank the police officers in Suwanee for their service — at least that’s what it seemed like during my five-hour ride-along. I should mention that I’ve never been on a ride-along before, so my expectations revolved around a series of “Cops” episodes I’d watched in the past. However, my experience was nothing like that.

I may have started my day at noon, but Officer Todd Cribbs was already halfway through his 12-hour shift. Throughout the day, no guns were fired, no drug busts were made, and there were no high-speed chases. However, I did get insight into the daily life of a Suwanee police officer and to be honest, I was okay with avoiding most of the “action.”

Before becoming an officer in Suwanee, Officer Cribbs worked in the jail with the DeKalb Police Department for 12 years. As a Duluth native who wanted to get out on the streets, Cribbs and his wife, Megan, made the move to Suwanee where he has been an officer for a little more than a year now.

“I love my job,” Cribbs said. “I get to help protect a community that I spent a lot of time in growing up.”

Over the five-hour ride-along, we responded to a 911 hang-up, pulled a few people over for traffic violations, filed a police report for a stolen wallet, escorted a young lady to the Gwinnett County Jail, and even stopped to bird watch with fellow community members (I definitely didn’t expect this one).

“There’s really not a typical patrol day in Suwanee,” Cribbs said. “There are some days we can respond to calls all day long and then others where we just do traffic stops all day.”

I found my anticipation growing every time a call came over the radio, even if I didn’t exactly understand what was going on. Because of this, I spent the majority of the five hours trying to decipher the codes officers use among themselves and dispatch. The only thing I could wrap my head around were the “10” codes. These are shorthand codes that officers use to let dispatch know that they are en route, confirming an action, or letting them know a situation is under control.

While my ride-along wasn’t necessarily as eventful as I hoped it would be — which is probably a good thing — I walked away with a better understanding of law enforcement. I heard some great stories about all of the odd situations local law enforcement are faced with. From dramatic car chases and gang- related crimes (yes, even in Suwanee) to on-foot pursuits ending in officers jumping down a 40- foot embankment, the life of a Suwanee police officer is never boring.

My time spent with Officer Cribbs gave me firsthand insight into the problems and solutions police officers are faced with on a daily basis. I have always respected and appreciated law enforcement, but after leaving that day I can confidently say the Suwanee PD is a major reason why my family, friends, and co- workers can sleep peacefully at night.

If you’re interested in learning more about what goes on behind the scenes in our community, the Suwanee Citizens Police Academy is held for 10 Lizzy Kidney got a peek behind the scenes with Suwanee PD. weeks every year. The academy gives the community a glimpse behind the badge with training in crime scene processing, traffic stops, building searches, narcotics identification, and crime prevention. To learn more or apply for this year’s academy, visit friendsofthesuwaneepolicedepartment.com.

Broadway in the Park is Back!