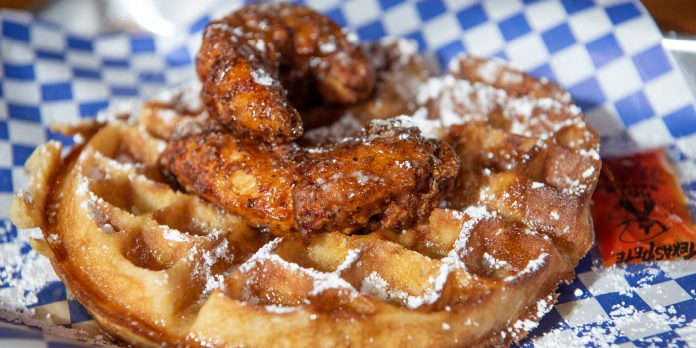 Beloved food truck sets up shop in Suwanee and brings its family recipes with it.

“Nana G is my grandmother,” says Guy Hollcroft, owner of Nana G’s. “She passed away three years ago at the age of 104 years old. She left us with a lot of cool things that we’ve grown up with.” One of those cool things is their popular chicken and waffles recipe, a recipe that has long been noted on many best-of lists around metro Atlanta from Nana G’s time as an in-demand food truck. The recipe has certainly evolved over time, but it all began with a clever idea Nana G had one morning during breakfast.

“It was a flapjack, and then it turned into a little bit more like a pancake,” Guy says. “Then it turned into a waffle — it was just one of those things. The most creative idea that we had was the bacon-infused waffle. That happened many moons ago when my mother was just a little girl. One morning, my grandmother decided to cut up all the meat and put it in the flapjacks so nobody saw who had more. That kind of stuck with the family and as time went on, we kept putting the bacon and sausage in the flapjacks and the waffles, and now it’s evolved into a bacon-infused waffle.”

The recipe certainly lives up to the hype. In their signature Papa G’s, the bacon-infused waffle is topped with powdered sugar, maple syrup and two pieces of fried chicken. The warm and fluffy waffle soaks up all the yummy syrup creating a sweet little nest for the fried chicken, whose touch of spice adds a nice balance to all the sweetness. It’s a really dreamy bite of sweet and spice, perfect for an early brunch, lunch or dinner — any time, really.

If you’re feeling adventurous, try one of their chicken and waffle variations, including the Auntie P’s, which features sliced banana as an added topping. The Cousin G’s (named after Guy) takes it up a notch with sliced banana, Nutella and peanut butter.

In addition to chicken and waffles, Nana G’s also offers a number of tasty home-cooked meals, including sandwiches, tacos, salads, fresh-cut fries and their award-winning wings. “These are things we’ve grown up with,” Guy says. “They’re the originals. They are staples of our country. They are home-cooked, simple items — they’re just good.” 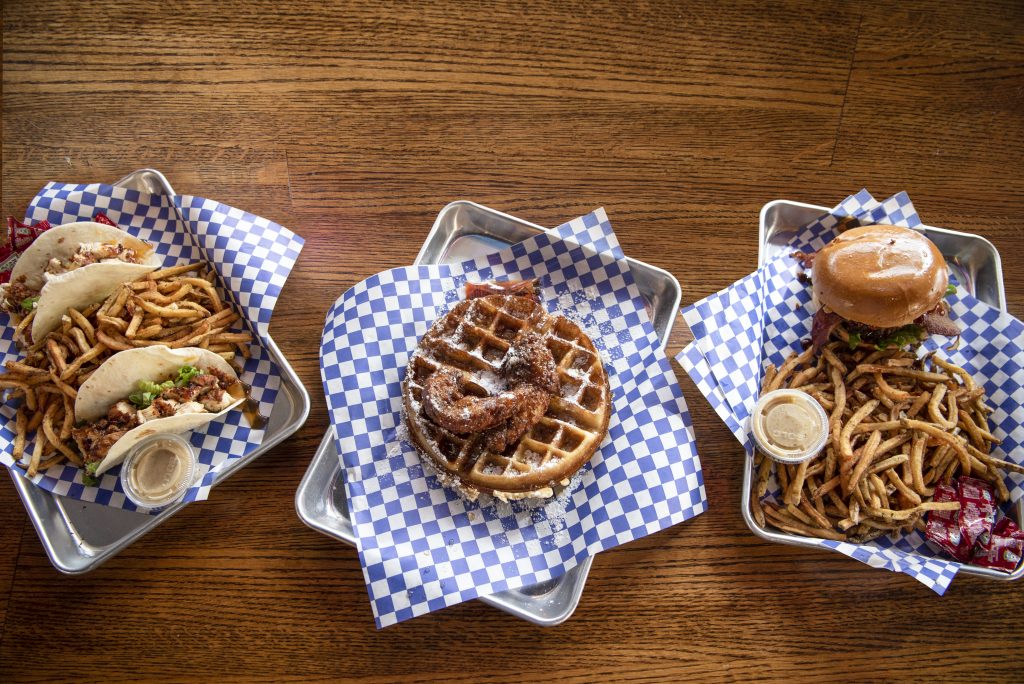 FINDING A HOME IN SUWANEE
The original Nana G’s food truck started in 2011 and recently celebrated its ninth anniversary. Suwanee locals will remember it from Town Center’s Food Truck Fridays, which they were a part of for three years. After almost a decade of the food truck biz, however, Guy says it was time to settle down into a physical location. “I’m 51 now. I didn’t want to spend all of my time getting off and on that truck,” he says. “People wanted to be able to find us and catch us all the time, not just on an 11-2 basis. We took the chance on a small place in Atlanta. We were able to do a little business and learn more about how a brick-and-mortar business operates. It was a stepping stone. God knew what was going on — he prepared us for this thing here [in Suwanee]. We have beer and wine now. We never had that down there.”

The original location was located on Moreland Avenue in Atlanta. It lasted three years before COVID hit and the neighborhood went through changes that led Guy to shut it down and set up shop in Suwanee. “All the stars aligned for this place,” he says.

Guy credits the opening of the new location and the success he’s seen so far on the support of the City of Suwanee. “Suwanee really wants businesses to succeed,” he says. “We love it out here. The community here is unreal. I recommend Suwanee to everyone. The people here are amazing.” 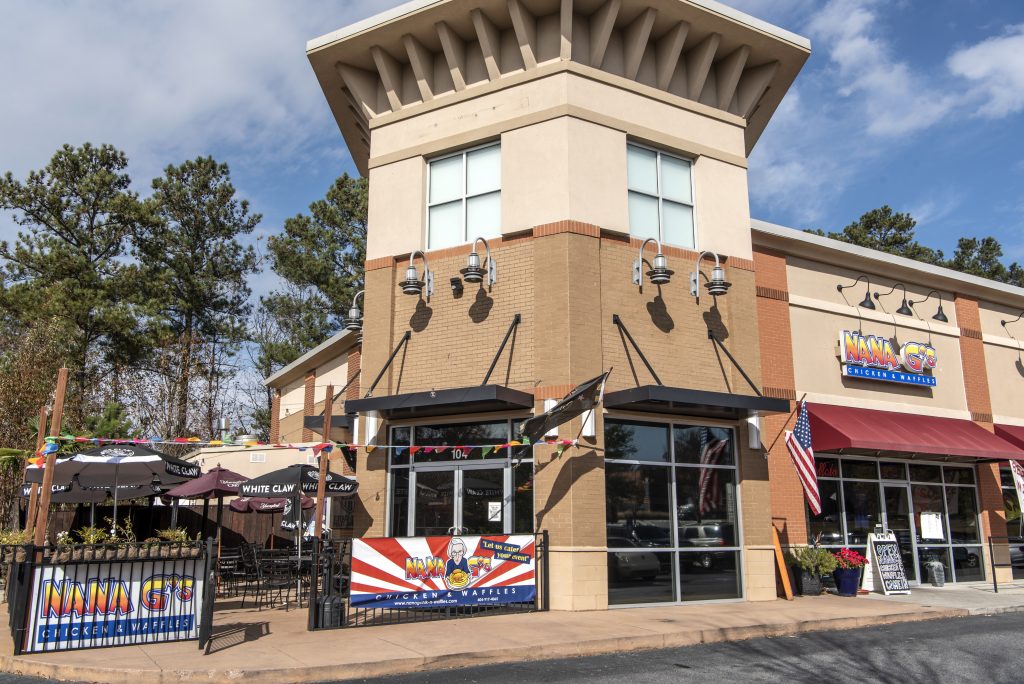 A DREAM COME TRUE
“He was made to do this,” says Paula Hollcroft, Guy’s mother. “He’s got the personality. He remembers people’s names and faces. I’m not as good at recognizing people, but Guy always remembers.” And she’s right. Guy certainly has a presence in the dining room, taking orders, chatting up customers and making sure everyone who visits Nana G’s leaves happy.

When you walk into the restaurant, the first thing to greet you isn’t necessarily the aroma of chicken, waffles and wings — but we won’t lie, it’s not a bad combination. The first thing to greet you is Guy’s excitement. It’s not forced or fake; Guy truly loves what he does. He loves running a family business and incorporating his family into all aspects of Nana G’s — after all, all of the menu items are named after family members. “I’ve waited for this. I’ve worked hard,” he says. “I’ve always said I wanted to own a restaurant.”

Guy and Nana G’s bring something different to our community. Sure, you can visit and have a great meal with a beer at the bar or share bites of your waffle with the family in the dining room, but you also get a front-row seat to the evolution of a family business that started long ago in Nana G’s kitchen. So pull up a chair and order a Papa G’s. You won’t be disappointed.

Nana G’s Chicken and Waffles is located at 991 Peachtree Industrial Blvd. in Suwanee. For more information, call 404-917-4065 or visit NanaGChik-n-Waffles.com.