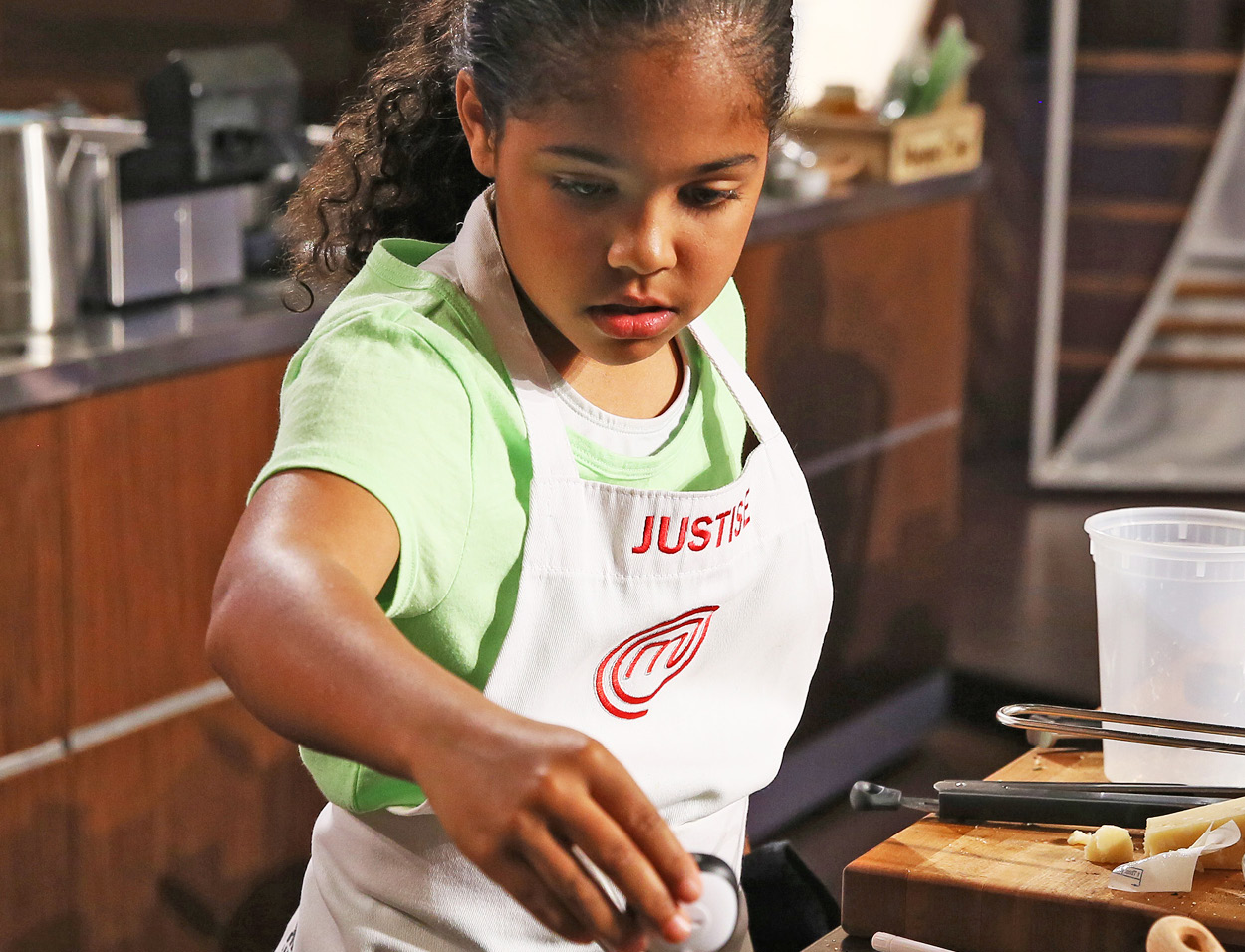 Fox TV’s hit show, MasterChef Junior, is back for its 5th season, and local Sugar Hill resident, Justise Mayberry, is already blowing the competition out of the kitchen. Thousands of kids, aged 8-13, from across the nation compete to earn a coveted spot in the Top 20. Those lucky few move forward to earn a MasterChef Junior white apron and the opportunity to compete for the MasterChef trophy and a
$100,000 grand prize…

Tune in to FOX to watch Justise Mayberry on MasterChef Jr every Thursday @ 8/7c.

Justise Mayberry, is quickly making a name for herself and has cooked her way into the final Top six (at time of publishing). Whipping up dishes like peanut butter and jelly macaroons, pistachio pudding pie and pan-seared shrimp with quinoa, Justise has already won multiple challenges. Her win in the pistachio pudding pie competition even gave her a chance to smash the pie into famous chef/host Gordon Ramsay’s face. “I didn’t want to mess up his face,” Justise laughed. “I thought maybe I smashed it a little too hard!”

And while that might be the highlight for some young chefs, Justise has already snagged herself an even bigger prize. Earning the win in the Mystery Box challenge presented by former First Lady Michelle Obama, Justise earned the opportunity to not only interview Michelle Obama, but go to dinner at the White House as well. “That was really fun! It was something I always thought about, but something I never thought I’d be able to do,” said Justise. “I got to get a glimpse of what their life was like there!”

Participating in one of the most watched cooking competitions in America might be stressful for some, but Justise describes the experience as something you get to do “once in a lifetime.” “It was really busy, but we got used to it. And, it was so cool to be able to meet (celebrity chefs/hosts Gordon Ramsay and Christina Tosi) for the first time,” she shared.

When Justise won the pie competition she got the chance to smash a pie in Michelin-star-winning Celebrity Chef, Gordon Ramsay’s face

At the young age of 11, Justise faced the competition with eight years of cooking experience already under her belt. Thanks to her foodie father, Jamaal Mayberry, Justise grew up around the kitchen and has spent years developing her sophisticated palate. “At age 4 she’d come into the kitchen and taste everything. She loves to eat,” he explained. “I’d let her help with prep, teaching her about different spices, and from that we went into learning how to cut… starting with a butter knife. It was a very gradual process. She soon started making her own sauces and marinades and we’d discuss what was missing or different things we could have added,” he continued.

Each week the competition dwindles as kids are eliminated one by one based on a number of exciting cooking challenges, including cooking a meal for 50 first responders, cooking outdoors for hungry Boy and Girl Scouts, and cooking for VIPs such as Mayim Bialik (The Big Bang Theory).

With the passion for cooking instilled in her from such a young age, Justise knew what it was like putting in hours of work in the kitchen before the competition even started. This mentality helped her keep her focus on the long days on set.

As the competition heats up and Justise continues to prove to be a force in the kitchen, we know this little chef has a bright future in store. When dreaming up her future plans, Justise shared that her goal is to eventually become a teacher. If not a schoolteacher, a teacher for junior chefs like herself. “I’d love for every kid to learn how to cook like I learned how to cook. Basically, I’d like to start my own little MasterChef Junior business,” she said. And, if her talent in the kitchen is any indicator, we’d guess this talented MasterChef Junior star can do whatever it is she puts her mind to. ■