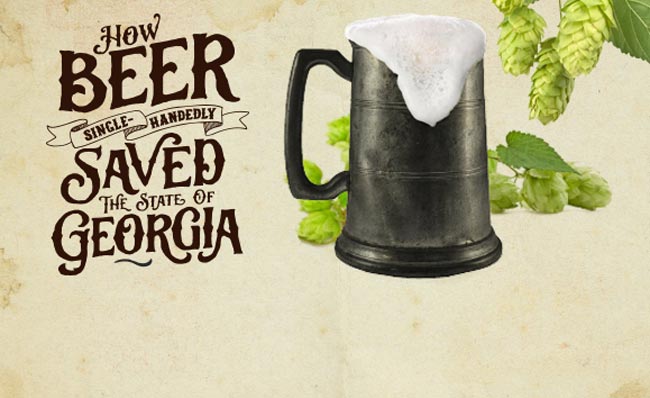 The story of beer in Georgia is almost as old as the state itself. with the explosion of craft breweries across the United States and right here at home, beer has taken a new place in the spotlight. Craft beer drinkers now enjoy a vast selection brewed right in their own neighborhoods. As of 2014, craft breweries have an all-time high market share of 11 percent of all beer sales. In Georgia alone, it is expected that over forty craft breweries will be in operation within the next year. With craft beer on the ride, Georgia consumers appear to be returning to their roots- when beer was a part of everyday life- and yearning to learn more about the history of beer in the Peach State. Originally, Georgia was intended as a colony for debtors. That’s right, our prestigious history starts with broke people who went to jail for being broke. James Oglethorpe experienced the imprisonment of a dear friend of his who had fallen on hard time.

Due to the nature of prison in the 1700s-not good, by the way- Oglethorpe’s friend passed away. In response, Oglethorpe made it his life mission to save other prisoners and not condemn them to a life of homelessness or death in prison. Oglethorpe approached the King with a model of a military colony between the Spanish in Florida and the English in South Carolina. In this proposed colony, debtors could come and work off their debt. The King gave permission but on the caveat that rules and requirements had to be set in order to determine who could go. If you were going to get out of jail for free, this is how you had to live:

Rule number 1: No Alcohol. That’s right, the worst rule you could possibly have. That rule alone most likely turned off many before they even heard the others. The rest of the rules included no gambling, no slavery, no Catholics, and no lawyers. After establishing his rules and loading up the first round of soldiers, James Oglethorpe and his right hand man, William Horton, brought their first crew over to Georgia to settle. At this point they were pretty gung-ho and expecting to be “the best colony ever.”

However, the first problem to emerge revolved around hydration. No alcohol consumption meant no beer – which in turn left the local water supply as the only source of hydration. The problem with local water was dysentery. The problem with dysentery was that people started dying. Once James Oglethorpe realized how badly this had turned out, he left for England to beg the King for permission to change the rules. But when he left, Oglethorpe put his right hand man, a local favorite, busybody, and friend – Major William Horton – temporarily in charge.

By the time Horton was given control, the people had learned that they were the only colony living under such a strict set of rules. South Carolina right up the coast looked like Mardi Gras everyday compared to what was going on in Georgia. Rebellion began to stir amongst them, but in an effort to reduce bloodshed, they actually asked Holton for permission before going about the business of stirring a revolution. Horton gave the people permission… with one requirement: nobody dies. The result was a bloodless revolution that brought beer to Georgia!

The only issue was that the guy ultimately in charge, James Oglethorpe, was in England when all of this happened. When he returned to assume control of Georgia he discovered that the rules no longer applied and they had gone behind his back. Oglethorpe was furious with Horton and demanded his resignation to which Horton essentially replied, “Hold on a second. Everybody might be tipsy, but nobody’s dying anymore. You’re welcome.”

Oglethorpe realized Horton had a point: he was going to be famous, everybody was doing well, and Georgia was going to be successful. So as a reward for his excellent leadership, Major Horton was given control of what became Jekyll Island, Georgia.

Horton, who saw firsthand how necessary beer was for survival, got to the island and decided that it would be a great place for a brewery. So in 1738, Major William Horton founded the South’s first brewery on Jekyll Island.

With that founding, beer became an integral part of colony life in Georgia. New arrivals to the colony were given a welcome package that included 44 gallons of ale. Yes, 44 gallons. They figured out that if people drank beer and not just the local water sources, then they didn’t get sick. The brewing process actually made the water safer to consume.

In the end, beer single-handedly saved Georgia. And today, we’re committed to honoring history by carrying on a rich tradition – beer consumption for your health!