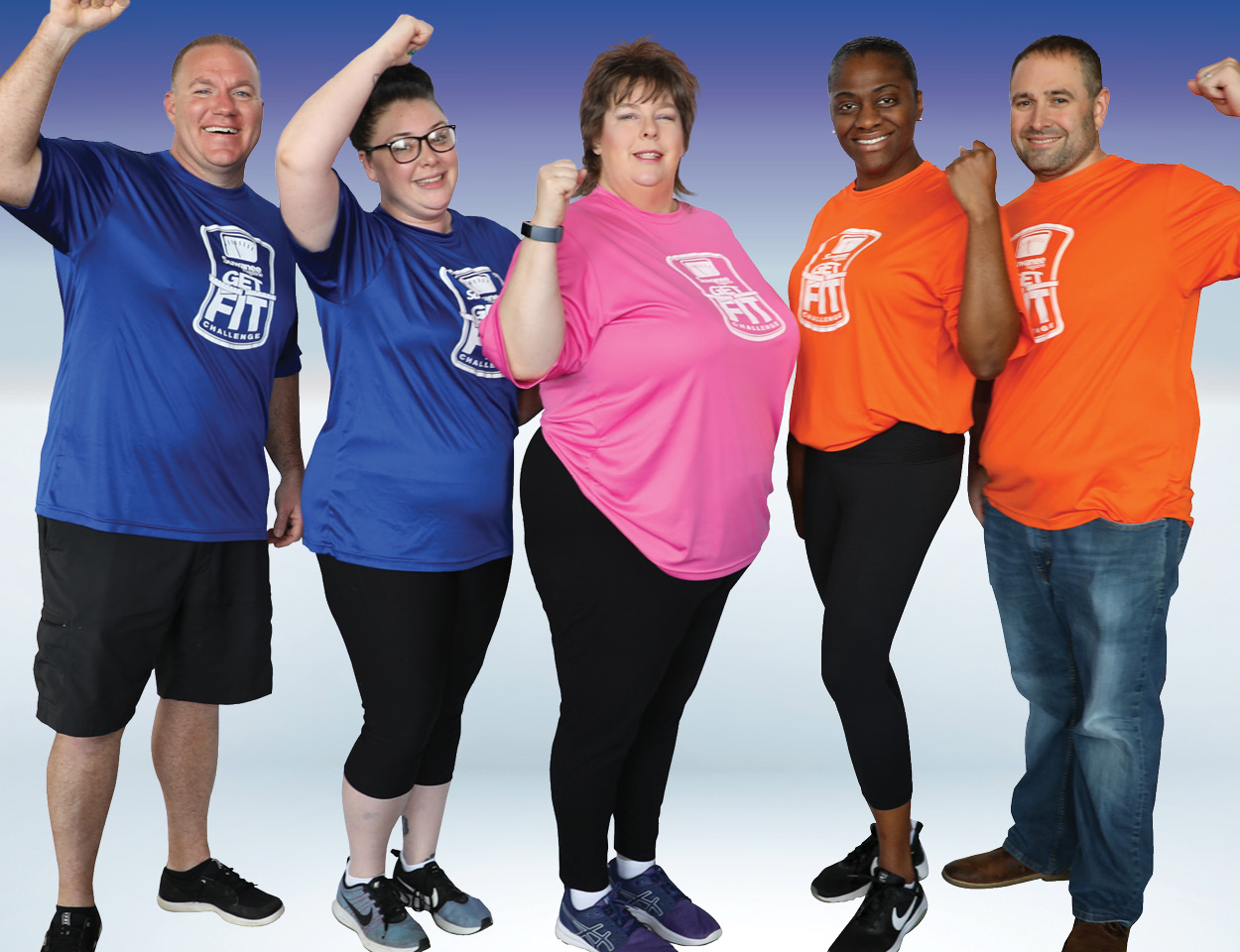 THE 2019 CONTESTANTS LOST A COMBINED TOTAL OF MORE THAN 100 POUNDS AND NEARLY 20% BODY FAT!

All good things must come to an end, and so must the 2019 Get Fit Challenge. Over the last three months, the contestants have worked hard to change their lifestyles, even when the realities of life — moving, job changes, health issues, and family commitments — sometimes battled against them. There were many triumphs, and a few struggles, but we’re so proud of each of the contestants for sticking with the challenge and not giving up. All of them have shown an admirable level of dedication and determination, and they’ve become inspirations not only to the Suwanee Magazine staff, but to the community as well.

While the challenge wouldn’t be a success without the contestants, we’d be unable to put on the Get Fit Challenge without the help from so many in our community. First and foremost we have to thank the trainers, including Dan Leblanc from Crux Fitness, Terry Gatewood from Physique Refinements, Brandon Brigman from No Excuses CrossFit, and the Whole Food Health Coach Stephanie Wolfe, who all donated their time and resources to help the contestants reach their weight loss and fitness goals. This competition would not be possible without their generous support, as we rely on them to be instructors, mentors, and ultimately the contestants’ biggest cheerleaders.

“It was an absolute pleasure and honor to be a part of such an incredible program for the second year in a row,” Leblanc says. “Complete strangers, being completely vulnerable, making everything public, is something not a lot of people are willing to do.”

We also owe a huge thank you to John Perry & Associates, who provided the health assessments at the beginning and end of the competition, and Alkaline Wellness Center, who led our team through an intense hot yoga class we’ll never forget! The Fresh Market Suwanee also generously donated gift cards to each of the contestants to help them stock their kitchen with healthy foods for the competition. The 2019 contestants lost a combined total of more than 100 pounds and nearly 20% body fat. Congrats to all of the contestants. We are so very proud of you and look forward to continuing to follow your journeys. And now, without further ado, the winner of the 2019 Get Fit Challenge is… 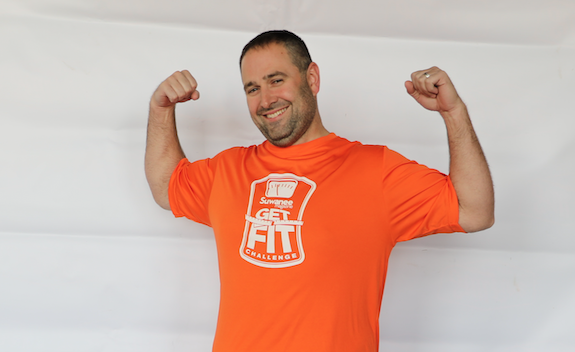 When Brian first set out on the Get Fit Challenge, his goal was a familiar one: To improve his health so he could keep up with his two young children in hopes of not limiting what he was able to do with his family. For the last few months, Brian has been working out at Crux Fitness and over that time he was able to lose more than 50 pounds and 8.6% body fat — some of the biggest numbers we’ve seen in the history of the challenge!

But even with consistent progress, Brian admitted that the competition was no small feat, and he struggled to maintain his meal plan. “It is getting harder to stick with it and not cheat, but seeing the results are keeping me going,” he says. “The workouts continue to get easier and you have to push yourself harder to keep your heart rate up where it originally was just walking in the door. Seeing a couple of burpees written on the board is not a reason to turn around and walk out anymore, but seeing 272 of them in one session is still a reason to turn and run.”

Brian’s trainer, Dan Leblanc, had nothing but positive things to say about Brian and the progress he’s made: “Brian came into this competition at full steam. He knew what was in store, and he embraced it,” he says. “Brian embodied every aspect of Crux’s fundamentals and foundation and took his commitment to change to a level I’ve rarely seen. It almost seems like Brian knows no pain, he seemed to be able to fight through even the most brutal of workouts. Brian really is the newest superhero in the Crux family.” 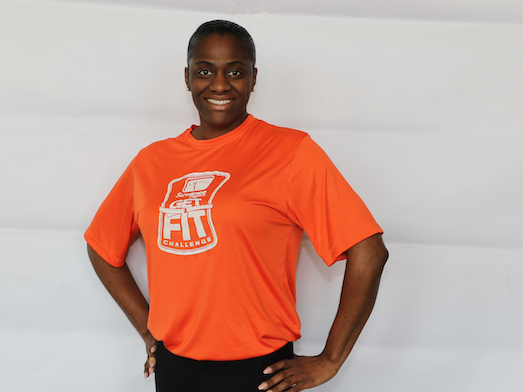 Entering the competition, Erikka was diagnosed pre-diabetic and was having trouble making the changes necessary to improve her health. Once she committed to the Get Fit Challenge, however, Erikka started to dominate her workouts at Crux Fitness. “Watching Erikka grow in this competition was like watching a toddler learn how to crawl, then go straight to Olympic sprinting, skipping every other stage along the way,” Leblanc says. “The dramatic changes she made in her health were mind-blowing. I met two Erikkas in this competition — the timid, unsure, unconfident Erikka, and the incredible beast who now walks into the gym with her chin high, shoulders back, and eagerness to really find out what she’s capable of next.”

And while she lost an impressive 5% body fat, Erikka sees the ending of the challenge as bittersweet. “I must say I am a little sad the challenge is coming to an end,” she says. “I really want to keep going strong at Crux because I really enjoy the trainers. They are passionate about what they do and it shows.”

Terry was one of the contestants who faced the most change throughout the challenge. From moving to a new home to juggling changes in his work life, Terry considered leaving the competition because the commitment was almost too much to handle with everything going on in his personal life. But Terry stuck with it and finished the competition. When it comes to the Get Fit Challenge, it’s not so much the numbers lost on the scale, even though that’s one of the goals, but it’s truly seeing through a commitment you make with yourself, and we’re so proud of Terry’s determination and grit.

“I think most of my lack of confidence has been from my lack of self-esteem in life. The majority of my lack of self-esteem has stemmed from my personal body image,” he says. “So, is that why I chose to do the challenge? No, not at all. My true image does not come from a name I carry, or a look that I have, or even the confidence I lack. My true image is found in the Book of Genesis. God, the Creator, created me in His own image. The challenge for me doesn’t stop at the end of March with going to the gym, my challenge is daily, forever, while I am on earth, that I have been created in the image of God, that I am a masterpiece of His, and that I can live with confidence because of that.”

When the competition began, Michelle was new to the Suwanee community. She’s lost weight on her own in the past, but couldn’t seem to maintain that weight loss over time. After being paired with Terry Gatewood at Physique Refinements, the pounds started to melt away. As she approached the end of the competition, she lost nearly 30 pounds — and she deserved it, as she was totally committed to the challenge.

“I am training five days a week for an hour at a time and logging another six to seven hours of extra cardio a week,” Michelle says. “I feel like I am turning the last corner in a 100-meter dash and I am running on fumes, but this is just the beginning of a marathon for me. I have a long way to go before I achieve my long term goal. This opportunity has made it possible for me to accomplish that goal.”

When we met Jennifer, she was newly single and ready to take back control of her life. She was also a Type 1, borderline Type 2 diabetic who was having trouble maintaining her weight, all while struggling to keep up with her 12-year-old daughter. Jennifer overcame a lot during her time at No Excuses CrossFit. She started off in one-on-one training sessions with the trainers, not yet ready to work out in the group, then over time was able to join into the group environment. She also battled illness throughout the end of the challenge, but she stuck it out!

“It is so rewarding to be able to work out with everyone else and keep up,” she says.

Prizes For the Winners

The Suwanee Magazine Get Fit Challenge would not be possible without the support of our community sponsors, including Salon Greco, who generously provided a makeover for our runner-up. Among the title of “Suwanee Get Fit Challenge Champion,” our overall winner, Brian Mutzberg, was awarded with a massage from Karen Krotz, a gift certificate to Bare Bones Steakhouse, and tickets to Stone Mountain Park to enjoy with his family. In addition, Crux Fitness has generously awarded both Brian and Erikka with three additional free months. The Get Fit Challenge is truly a community challenge. So many people and businesses donated their time and services to the challenge, all in the spirit of helping better the lives of our contestants — from the health assessments, inbody measurements and nutrition coaching to the workout classes, drop-in yoga experience, and the shopping trip to the Fresh Market Suwanee. The challenge also wouldn’t be possible without the incredible support of the community. Thank you to everyone who made this possible!

A Special Thanks to our Sponsors

This competition would not have been the same without the support of our amazing sponsors: Thank you also to Salon Greco, Karen Krotz Massage, Stone Mountain Park and Bare Bones Steakhouse for providing prizes for our winner.