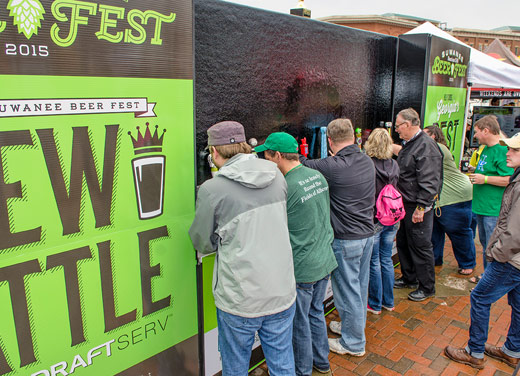 This is true. But, the impact and story extends far beyond one day in March. It is the Suwanee community that has embraced and propelled the success of the festival. In turn, it simply made sense for The Fresh Market – whose motto is “neighbors serving neighbors” – to fulfill the role of Presenting Sponsor for the second year in a row…and to do so in an even grander way this year.

This year, The Fresh Market is collaborating with Spectrum Packaging (a premier packaging company specializing in creative solutions for breweries) and DraftServ (an innovative technology company that creates self-serve, mobile, beverage-dispensing units) to provide local breweries with an unprecedented platform to showcase their products and evoke community support. This will be a groundbreaking opportunity for beer enthusiasts to have a direct economic impact on their local craft beer scene.

Raise your glass to the inaugural Suwanee Beer Fest “Brew Battle” powered by DraftServ Technologies. Ten local breweries have been invited to put their best beer forward and compete for the title of “Georgia’s Best Beer” – as decided by the over 6,000 Suwanee Beer Fest attendees on March 14th, 2015.

The platform: DraftServ’s interactive, self-serve, technology-driven, beer trailer displaying real-time leaderboard screens that track Suwanee Beer Fest’s most popular beer, at any given moment. This is the first time that DraftServ will utilize their revolutionary technology for a community festival and competition.

The Fresh Market has dedicated space in each of its seven Metro Atlanta locations for promotional displays and new inventory of the ten competing breweries. This is the first time that some of these local breweries will have their beers sold in The Fresh Market! The winning brewery, crowned “Brew Battle Champion” at Suwanee Beer Fest, will then receive a personal marketing display and increased inventory in all seven The Fresh Market locations following the event, for a minimum of one month.

“I’ve always been an advocate of businesses giving back to the communities in which they operate,” said Jim Healy, Store Manager of The Fresh Market in Suwanee. “Last year we introduced Jekyll Brewing as part of our support for Suwanee Beer Fest, and Hop Dang Diggity quickly became the number one beer at The Fresh Market in Suwanee, and sells very well in all the Atlanta stores,” Healy continued.

“We became much more focused on local products last year, after we saw the response from the community to local craft beers. Since then, we’ve brought many other local products to our store, and so far the response has been terrific,” said Healy. The whole idea of being an effective community member is rallying behind your neighbors, behind the businesses, products and causes that shape us.

So, with this revolution stirring amongst us, let the inaugural Brew Battle serve as your rally cry! And, may the best brew win!