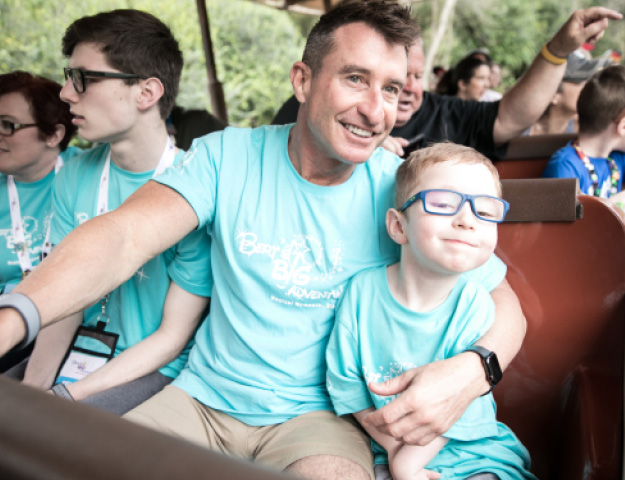 Atlanta nonprofit provides the trip of a lifetime for children battling chronic and terminal illnesses and their families.

For most people, a trip to Walt Disney World is an exciting memory that will last a lifetime. But for the families helped by Bert’s Big Adventure, a trip to Disney World represents a memory- making escape for those who desperately need quality time together.

When radio host Bert Weiss launched his popular morning radio show, “The Bert Show,” on Q99.7, he knew he wanted to use his voice to make an impact on the Atlanta community. The result was Bert’s Big Adventure, a nonprofit organization established in 2002 that provides an all-expenses-paid, five-day trip to Walt Disney World for children living with chronic and terminal illnesses and their families.

In 2003, Bert’s Big Adventure launched by taking seven children and their families to Disney World and has since grown into an annual trip that now includes 12 to 15 families. Many of the children who go on these trips, ranging in age from 5 to 12 years old, have been faced with illnesses that not only take a toll on their bodies, but on their families as well. Many of the children have spent most of their lives in and out of the hospital, have undergone numerous tests and procedures, have endured surgeries and endless medications, and have felt the effects that never- ending medical bills have taken on their families. But through it all, they persevere. And while the illness takes its toll on their little bodies, the strength, compassion and love that they and their families exude is never defeated.

The team at Bert’s Big Adventure has made it their mission to not only provide a joyful experience for the children but to also take some of the responsibility off of the parents’ shoulders. In an effort to make this possible, not only are the trip’s expenses paid for by the organization, but a medical staff also joins the trip and each child is paired with a Fairy Godparent volunteer to help make their experience the best it can be, while also letting them just be a family.

“The trip itself really provides families time to spend together without the stress of having to be on top of things all the time,” said Molly Darby, Bert’s Big Adventure’s executive director. “The children get the full VIP experience with a private chartered jet decked out with Disney decorations and flight staff wearing Mickey ears, a red carpet rolled out for their entrance, and a devoted team that is dedicated to giving them pretty much anything they want during their five days at Disney World.”

On the most recent trip, one child in particular stood out to Molly. When the Bert’s Big Adventure staff met 7-year-old Adrian, she was battling Leukemia and had recently been in and out of chemotherapy, which had really affected her. “Like most children who go through chemo, Adrian came to us very reserved and shy,” Molly said. “There were so many times we introduced her and she hid behind her mom and didn’t say much. As the group arrived at Disney, and the families started interacting with each other, you could slowly see Adrian come out of her shell.” But it wasn’t until that Friday that the Bert’s staff really saw Adrian’s personality begin to shine.

“Friday morning we took a group to the Disney Princess makeover boutique, and since Adrian had gone through chemo it had been quite some time since she had her normal hair,” Molly said as she fought back tears. “The Disney Princesses put her in this beautiful dress and did her hair with some extensions to make it look full again. As soon as she looked at herself in the mirror she was a different person. She finished off the day twirling through the park in her dress, dancing on the dance floor with all the other kids, and even did a cartwheel down the fashion show runway! She felt like a typical, healthy child and it really encouraged her to be herself.”

It’s stories like this that show how much of an impact Bert’s Big Adventure has on the lives of these children and their families. But as impactful as the Disney trip is, the relationship between the families and the organization doesn’t end there. Bert’s Big Adventure hosts four quarterly reunions where more than 500 children and family members gather together to recreate bonds, meet other families who are going through similar struggles, and simply get a chance to enjoy spending time together. Living with a chronic or terminal illness is not only isolating for the children, but also the families, and these reunions offer a sort of support group that shows they’re not alone and provides the encouragement needed to keep fighting.

“Most of our children have serious medical conditions that require them to spend long amounts of time in the hospital, and many parents haven’t left their son or daughter’s bedside since they arrived,” said Molly. “Our Fairy Godparents really help to provide a mini escape for the child while also allowing their parents time to shower, eat, or take a much-needed break.”

The organization is always looking for volunteers to help in any way they can. Those interested in becoming a Fairy Godparent can fill out an application on Bert’s website. Potential volunteers will go through an in-person interview and background check, and must be able to commit multiple days a month to visiting the organization’s children. If a volunteer is unable to commit that much time, but still wants to be involved, the organization has three other year-round opportunities.

“We understand that not everyone can set aside large amounts of volunteer time,” Molly said. “Bert’s Magic Squad is a group of volunteers who receive an email when the organization needs some extra hands. Their duties range from coming to the office to help mail T-shirts to helping at event check-ins. There’s also our skill-sharing opportunity in which we ask someone with a specific skill-set to spare two hours a month and volunteer their skills to help at Bert’s. Our final opportunity is our Social Sidekicks program. Here we ask volunteers to donate 30 seconds a day to help support us on social media. We put them in charge of checking our social pages, helping with posting, and really just wrapping their arms around and encouraging the kids in our program through social media.”

It’s hard to put into words the impact that Bert’s Big Adventure has had on the lives of hundreds of children, just like Adrian, and their families over the last 17 years. The organization offers a magical opportunity for these “sick children” to simply be children. The laughter, smiles, and fun had on the trip provides an escape for not only the children who have endured so much, but for their families who only want their kids to be happy. Nominations for the yearly Disney World trip begin in April and generally close the beginning of September. If you have or know of a family with a child age 5-12 who has a chronic or terminal illness, has never been to Disney World, and lives within the radio listening area of “The Bert Show,” you can apply for them to be considered at Bert’s Big Adventure website beginning in April 2020.

Without the generosity and support of the community, the program wouldn’t be what it is today. If you’re interested in volunteering or learning more about Bert’s Big Adventure visit BertsBigAdventure.org.

4 Ways to Give Back

Ways to Give Back this Holiday Season