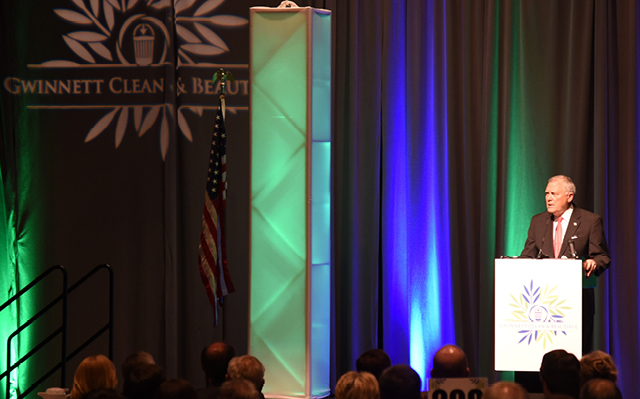 Duluth, Ga., June 10 – On Thursday, June 4, nearly 1,000 Georgians descended upon the ballroom at Gwinnett Center to attend Gwinnett Clean & Beautiful’s (GCB) ninth Environmental Address. Among the esteemed guests were local mayors and city staff, commissioners, representatives from four local CIDs, members from GCB’s Citizens Advisory Board, more than 150 students from Georgia Gwinnett College and high school leadership, many environmentally-minded corporations and organizations, members of the media and some of GCB’s most active Adopt-a-Road groups. The honored guest and featured speaker at the event was Governor Nathan Deal, who is well-known for his focus on economic development and the environment in Georgia.

To kick off the event – which was part of the on-going commemoration of GCB’s 35th birthday – Shiloh High School student and Gwinnett Student Leadership Team member, Jeremiah Edwards delivered the invocation. The Parkview High School Marine Corps JROTC presented the colors as the GCB Youth Advisory Council led the crowd in the Pledge of Allegiance, followed by a stirring rendition of the national anthem by Duluth High School Chorus Members. A special Environmental Stewardship Award was then presented to two young boys from Sugar Hill – Nolan Swift and Logan Drury – for their proactive efforts to pick up litter near their homes, as GCB Executive Director Connie Wiggins reminded guests “young people inspire us to do more.”

During her introduction of the Governor, Chairman of the Gwinnett County Board of Commissioners Charlotte Nash listed the things she admires most about Nathan Deal. Included among them were his ability to focus on priorities such as job creation, education and criminal justice reform; his successful partnership with the legislature in governing the state; and his understanding of the responsibility of being good stewards of this world. At the beginning of his address, Governor Deal stressed the importance of utilizing finite resources in a more appropriate way. Among recent environmental efforts statewide, the governor listed the reclamation of 3200 “brownfield” acres and the promotion of Construction & Demolition (C&D) landfills for recycling materials such as concrete blocks, bricks, glass, wood products and more. He then announced that he would be somewhat limited in his discussion about water issues – due to a gag order stemming from the ongoing water issues between Georgia, Florida and Alabama. Limited as he was, Deal addressed proactive measures that could help address the issue, such as the deriving and creating alternative water sources through reservoirs and cisterns. He suggested that these projects have a valuable secondary purpose to be used as augmentation facilities in times of drought.

The governor also heralded Gwinnett’s efforts, stating that “as the second most populous county in the state, keeping it clean and beautiful is a major priority.” He pointed to Gwinnett as having a water treatment facility that was not only best in the state, but among the best in the country. He urged other communities and counties in Georgia to follow Gwinnett’s example by cleaning and returning the water back to the source, and recommended that members of the audience encourage the Corps of Engineers to consider the option of giving credit for retreating and returning water back to the supply. In addition to his own ongoing efforts to persuade the Corps to consider this returned water credit option and the approval of $300 million of state funds toward the augmentation of water supplies, the governor also cited a monitoring and metering system of water used for agricultural purposes – stating that it is significantly less than what had been previously estimated.

“As we see growth coming our way, water is always going to be an important issue,” said Deal in closing. “You [Gwinnett} set a good example for the rest of the state of Georgia.”

The event concluded with the presentation of a $2500 scholarship to Rayann Arslan, a sophomore majoring in biology at Georgia Gwinnett College, followed by a final performance by Duluth High School Chorus members of “This Land is Your Land.”

About Gwinnett Clean & Beautiful:  Gwinnett Clean & Beautiful Services, Inc. (GCB) is a Keep America Beautiful affiliate and award-winning 501(c)(3) charitable organization. It boasts an expansive community-based network dedicated to finding long-term solutions to environmental and quality of life issues through individual action. The organization is guided by a 55-member Citizens Advisory Board that represents all sectors of the Gwinnett County community. A nationally recognized leader in creating cleaner, greener and more livable communities throughout Gwinnett, GCB involves more than 100,000 volunteers annually to clean and restore public places, recycle more, protect our watersheds and develop the next generation of environmental stewards. To learn more about Gwinnett Clean & Beautiful and its programs, aspiring environmental stewards are invited to visit www.GwinnettCB.org.