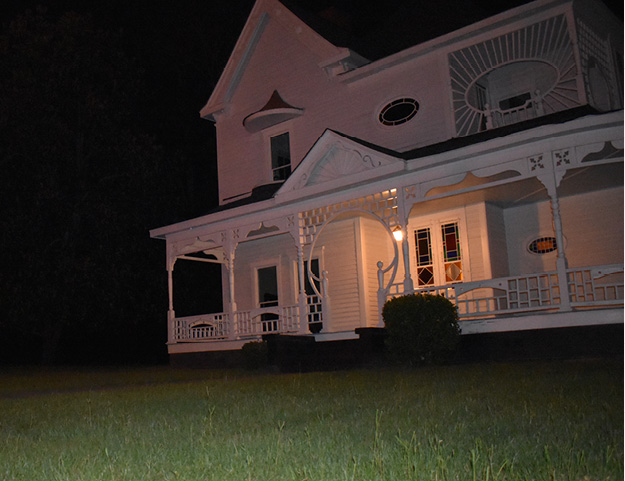 Every fall, an eerie presence fills the air for a short period of time and then fades away. Some poke fun at ‘all things spooky’ that the Halloween season brings, and some do not dare to test the limits… but, either side you’re on, Gwinnett County has been home to many historic sites – and fascinating tales – over the last 200+ years.

Story and Photos by: Natalie Stubbs

ATTENTION: Due to the nature of this content and some mature details within the stories, this article may only be appropriate for adults.

LEGEND HAS IT THAT THESE TWO MEN DO NOT WANT YOU TO REACH THEIR GRAVE SITE – SO BADLY THAT THEY WILL “PUSH” YOUR VEHICLE BACK UP THE HILL.

On Tribble Gap Road on the north side of Cumming stand two large oak trees facing directly across the road from each other. Back in the 1850s, two men were accused of attacking and killing a white woman. They were punished by being hung from these two trees and were then buried a little further down the road. To this day, legend has it that these two men do not want you to reach their grave site – so badly that they will “push” your vehicle back up the hill. As Suwanee Magazine writers turned ghost hunters, we felt compelled to try it.

Following all of the instructions we read during our research, we traveled to Tribble Gap Road. Once we passed Dunn Road, we located the two oak trees standing among the heavily-wooded roadsides. Once we reached these trees, we put the car in neutral and began rolling down the hill. When we reached the bottom of the hill and a white mailbox on our right, we anticipated continuing to roll as the road leveled out and we were still in neutral; however, the car came to a complete stop and, indeed, began rolling backwards.

We stopped the car and placed the gear back in drive, as the legend also states that if you let the men push you back far enough to return to the oak trees, you will die on your way home. We successfully attempted this phenomenon two more times for absolute confirmation, and then safely returned to the Suwanee Magazine headquarters.

A few other rumors accompany the legend: Some say if you pour flour on the hood of your car, then you’ll find handprints in the flour after the slaves push you back.

Suwanee Magazine does not recommend you test this legend on your own. Tribble Gap Road is a heavily-traveled road, particularly during the day, and participants must be extremely careful to watch for other vehicles. For those in question, there is a scientific explanation behind the legend of Booger Hill known as Gravity Hill.

Old Man Simmons, desperate to be brought back to his Lawrenceville home following his fight in the Civil War, promised that if God allowed him to make it home he would never leave the state of Georgia. God kept his part of the promise when Old Man Simmons came home with 14 bullet holes in his clothing and hat, but his body remained untouched. Years later, he fell asleep one night and never woke up. Since then, anyone who has come along to refurbish his home has fallen prey to the pranks Old Man Simmons apparently enjoys playing – he moves hammers across the room, flushes toilets, and sometimes shuffles paperwork to make sure his presence remains in his home.

Several spirits have been known to reside inside the walls of the Corner Stop Café in Lawrenceville, but one, in particular, was welcomed by the business owners over time. The spirit named Bo always had a playful sense as he enjoyed playing tricks on the staff. He would make the dishes sound like they were breaking and watch the employees come running into the kitchen. His disposition suddenly changed, however, as he was accused of having a concerned look on his face one day, which happened to be September 10, 2001.

The Aurora Theater in Lawrenceville used to be a Methodist church that neighbored a cemetery once known as one of the most paranormally-active places in Georgia. Patrick Burns and an assisting team spent the night in this cemetery and experienced phenomenon such as balls of light in the air, flashing lights, areas of 30-degree temperature drops on their legs, and patches of dead zones where their cameras suddenly lost all battery. Playing back footage, they would also hear the voice of a woman who was NOT in the cemetery with them that night. People dedicated many more nights digging into the unexplainable activities of this site. The Aurora Theater now hosts an exclusive Cemetery Tour that further explores stories of those nights spent graveside!

A currently unoccupied space in Lawrenceville used to be home to one of the only morgues in the area. Rumor always spoke of three suicides occurring on this front porch, until a lady named Doreen said otherwise. She abruptly paused upon reaching this building and proclaimed that “one of these suicides was not a suicide, but a murder!” and then fainted… Various renters of this space have also admitted to experiencing paranormal activity over the years.

A woman named Marsha worked at the Lawrenceville courthouse, which grew to become the third courthouse standing after the previous two were built with wood and burned down. On her lunch break, she came across a photo dated April 11, 1911. In this photo, a man had been hung, wearing a sign on his foot that read: “Do not wake him.” Working late that night, a loud noise startled her. From her office at the front left corner of the courthouse, she could see all sides of the courthouse, but didn’t see anything suspicious… until a gust of green mist came rushing through the doorway and she felt an angry, spiteful presence beside her. She tried to continue working, but frightened and frustrated, she shrieked, “Could you please just leave me alone!” and the presence disappeared…

Running late for curfew one dark, stormy night, 17-year-old Edgar Dunlap was faced with a risky dilemma. Take the long way home, or take a shortcut through Lawrenceville’s Honest Alley – which was home to everything dishonest, like a bad horse trade business ran by Jim Bob Oaks. Edgar decided to make a run for it, but as he reached the end of the alley, he felt a hand on his shoulder. He turned around to meet the empty eye sockets of a skeleton and then collapsed to the ground to be found and taken home by the Sheriff.

The next morning, the cover of the local paper read, “The Dead Walk the Streets of Lawrenceville.” A large oak tree in the middle of the cemetery was knocked down by an overnight storm waking the buried, which is apparently who Edgar met that night (or so the legend goes). The backsides of restaurants and stores that line Honest Alley today have never been remodeled or updated as store owners have been careful not to disturb the sleeping ghosts. Since then, many members of the community have claimed to have experienced paranormal activity over the years.

The bottom floor of a two-story brick building near the jail once functioned as a schoolhouse. The teacher, Ms. Maggie Stewart, told students every day that they should not bother “the men upstairs.” Three mischief-filled girls, Antoinette, Neddy and Little Mary, dared each other to go upstairs and write on the chalkboard to prove they made it all the way to the second floor. Neddy went first, then Antoinette, then Little Mary – who paused when she heard loud footsteps on her way up, but scurried to the top. She successfully wrote on the chalkboard as well, but they were caught by Ms. Maggie Stewart who was waiting at the bottom of the stairs.

Shortly following the girls’ scheme, Antoinette, Neddy and Little Mary were playing near an oak tree during a storm when Neddy was struck by lightning and immediately died. The next day, Ms. Maggie Stewart heard three crying, wailing voices that sounded like young girls, but saw no one. This happened again about six months later and again periodically after that…

Consider Giving Back on #GivingTuesday This Year

Home for the Holidays